China's seaborne imports of crude oil so far in October have averaged nearly 9.1 million b/d, outpacing full month September volumes by 6.6%, but congestion remains heavy at ports on the eastern coast, which could add further delays to inbound cargoes from the Middle East.

Nine vessels that had been waiting for at least seven days off Ningbo-Zhoushan port discharged in the first two weeks of October, data from IHS Markit Commodities at Sea shows.

However, 14 laden crude oil tankers with 'anchored' or 'moored' status were sitting in the anchorage area as of October 19. They carry mainly Middle Eastern crudes, including Upper Zakum, Basrah Light, Oman Blend, Murban and Arab Heavy. In addition, there are two cargoes of Merey-16 from Venezuela.

Overall port congestion has spiked in China in the last few months due to a combination of COVID-19 related disruptions, bad weather, and booming demand for consumer goods, contributing to a backlog of vessels at ports.

Ningbo-Zhoushan is one of the world's busiest container ports and operations had been briefly suspended last month as a precaution due to Typhoon Chanthu.

As of October 18, cargoes from the Middle East made up 54% of total seaborne volumes discharging this month, down from 60% in September.

The release of new Chinese crude oil import quotas on October 15 could speed up the pace of discharge in Shandong, where many independent refineries are located.

Nearly 15 million mt of quotas have recently been given to over 10 non state-owned refineries - believed to be the last batch for 2021. While Zhejiang Petrochemical, the mega refinery in Zhoushan, did not receive any new quotas, Shenghong Petrochemical, which is set to commission its 320,000 b/d greenfield refinery in Lianyungang, Jiangsu province by the end of the year, received 2 million mt of quotas.

Total volumes discharged into ports in Shandong province so far in October is just under 3 million b/d, slipping from 3.1 million b/d in September.

Angola is currently in third place, with arrivals breaching the 1 million b/d mark so far in October. Coupled with in transit cargoes, total discharges into China from the West African country in October could be in excess of 900,000 b/d, up from an average 716,000 b/d in the third quarter. This comes as total crude loadings in Angola surged to 925,000 b/d in September, up from 626,000 b/d in August.

No crude from Iran has discharged in China so far this month although a few vessels are waiting in anchorage and could discharge in Qingdao in the coming days.

In September, China received 316,000 b/d of Iranian crude, with five cargoes coming directly from Iran and another seven cargoes via transshipments off Singapore and Malaysia.

Venezuelan crude arrivals so far in October have averaged nearly 300,000 b/d - comprising one Hamaca and two Merey-16 cargoes - up from 125,000 b/d in September.

There have so far been no US cargoes arriving in China this month, although 1 million barrels of Canadian Cold Lake crude arrived on the Suezmax Advantage Start and discharged into Ningbo in mid October.

Growth in China's crude oil imports in the fourth quarter could see some tapering.

Muted activity in the industrial sector due to the power crunch as well as lower oil product export quotas have curbed refinery runs. In the independent refining sector, government inspections and measures aimed at consolidation have shuttered some smaller players, while the Shandong government has also instituted power rationing, which has impacted refining operations.

Latest data released by the National Bureau of Statistics showed total crude oil throughput in September fell to 56.07 million mt, or an average 13.7 million b/d, the lowest level since May 2020.

Year-to-date, nearly 172 million mt of quotas have been awarded in 2021, compared with close to 180 million mt in 2020. However domestic stocks will continue to be drawn down with the inaugural sale of crude from the strategic petroleum reserves - in late September 7.4 million barrels was offered via auction and more sales are anticipated. 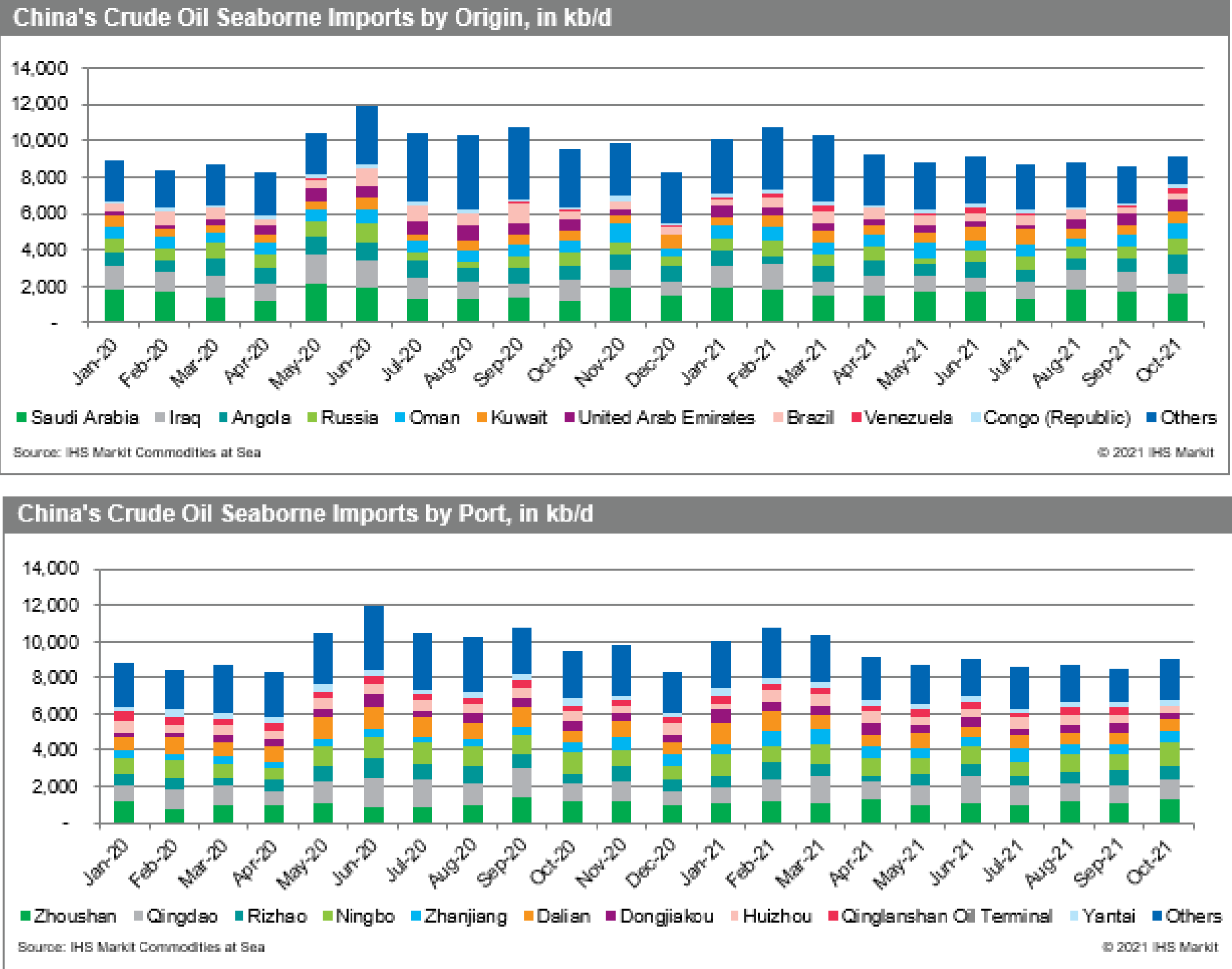 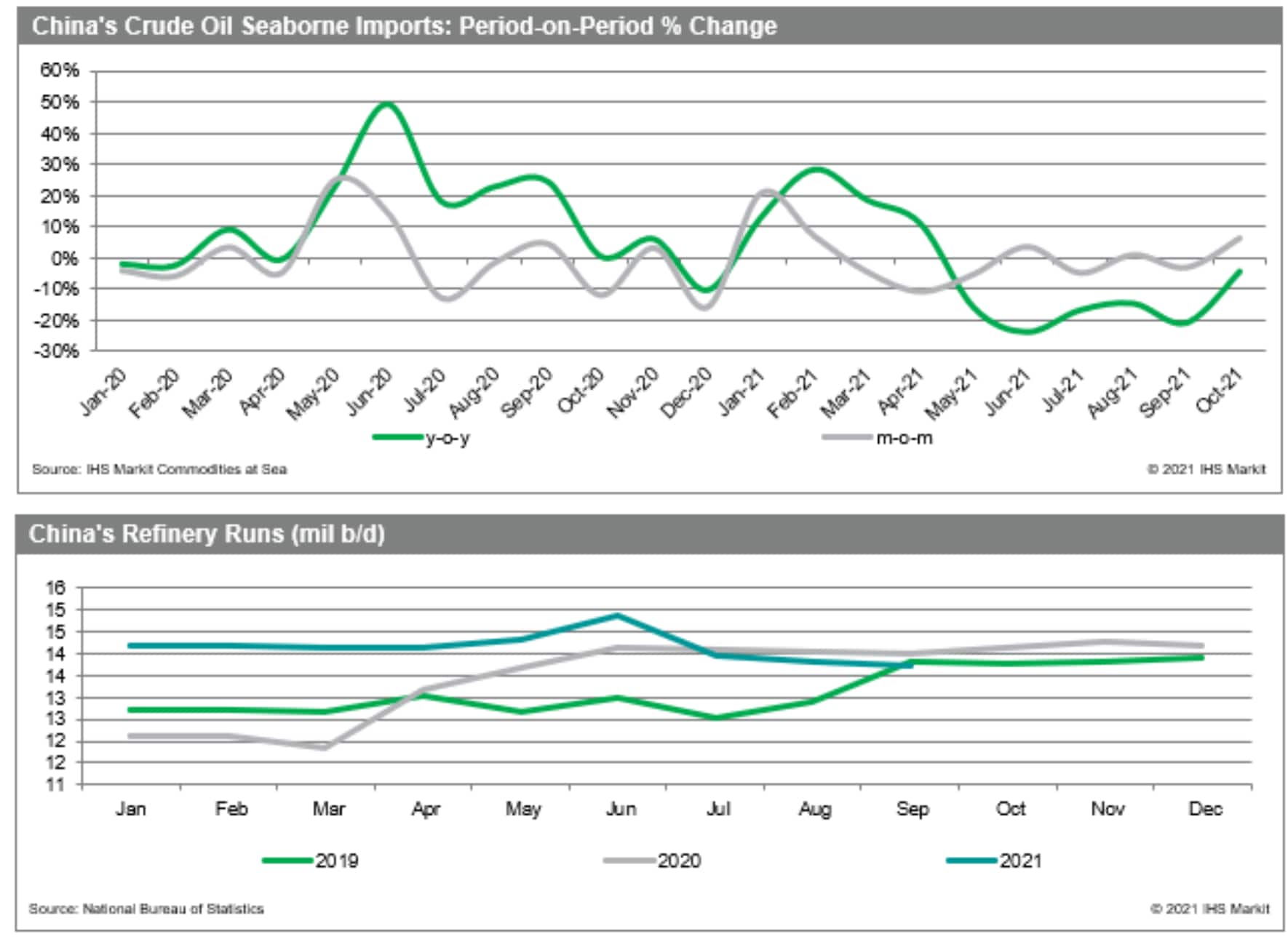 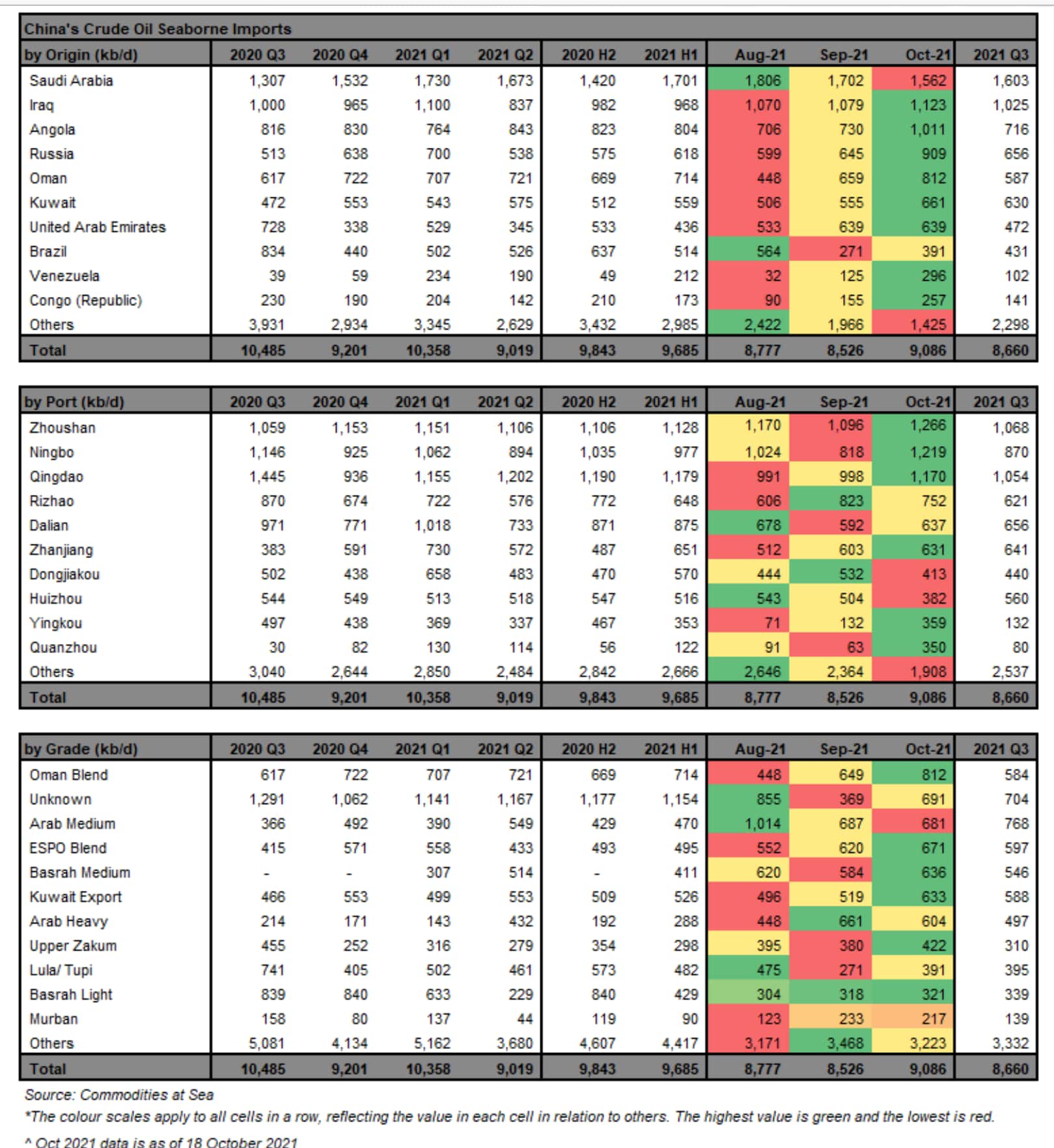 The information contained in this presentation is confidential. Any unauthorized use, disclosure, reproduction, or dissemination, in full or in part, in any media or by any means, without the prior written permission of IHS Markit or any of its affiliates ("IHS Markit") is strictly prohibited. IHS Markit owns all IHS Markit logos and trade names contained in this presentation that are subject to license. Opinions, statements, estimates, and projections in this presentation (including other media) are solely those of the individual author(s) at the time of writing and do not necessarily reflect the opinions of IHS Markit. Neither IHS Markit nor the author(s) has any obligation to update this presentation in the event that any content, opinion, statement, estimate, or projection (collectively, "information") changes or subsequently becomes inaccurate. IHS Markit makes no warranty, expressed or implied, as to the accuracy, completeness, or timeliness of any information in this presentation, and shall not in any way be liable to any recipient for any inaccuracies or omissions. Without limiting the foregoing, IHS Markit shall have no liability whatsoever to any recipient, whether in contract, in tort (including negligence), under warranty, under statute or otherwise, in respect of any loss or damage suffered by any recipient as a result of or in connection with any information provided, or any course of action determined, by it or any third party, whether or not based on any information provided. The inclusion of a link to an external website by IHS Markit should not be understood to be an endorsement of that website or the site's owners (or their products/services). IHS Markit is not responsible for either the content or output of external websites. Copyright © 2021, IHS Markit®. All rights reserved and all intellectual property rights are retained by IHS Markit