Japan's crude oil imports are recovering impressively in August and are on track to hit 2.9 million b/d, up from 2.04 million b/d in July and surging 21% year on year.

The July volumes had fallen 2% on month.

OPEC's agreement to further ease production cuts has increased global supply, allowing Japan to take advantage of the shorter haul from the Mideast Gulf, primarily Saudi Arabia, and avoid cargoes from the Atlantic Basin in favour of Middle Eastern grades. There has been only one U.S. cargo, of Eagle Ford Condensate, discharged in Sakai on 6th August, after a long break since late April.

However, Japan's appetite for crude oil from Ecuador has strengthened further in August, with total flows currently standing near 180,000 b/d.

Imports from Russia have recovered, having surpassed 90,000 b/d so far in August, from 23,000 b/d in July, but stand much lower than a year ago.

Japan's economy has been recovering since early Q2 2021, even though Covid-19 measures still remain in place, with the state of emergency having recently been expanded yet again across major areas during the summer holidays. New Covid-19 infections have been increasing, having recently reached 20,000 cases per day.

Japan's refinery runs were drastically affected by Covid-19, with total crude imports averaging below 2.3 million b/d since May 2020, compared to levels near 3 million b/d prior to the pandemic.

On the positive side, Japan's Eneos recommenced operations at its Oita refinery of 136,000 b/d on 14th August. The refinery, on Kyushu island in southern Japan, was forced to halt operations following a fire in May 2020, which took place at a crude distillation unit during a turnaround. Eneos' operation rates were lowered to 61-69% since April 2020, compared with 82-92% before the pandemic. 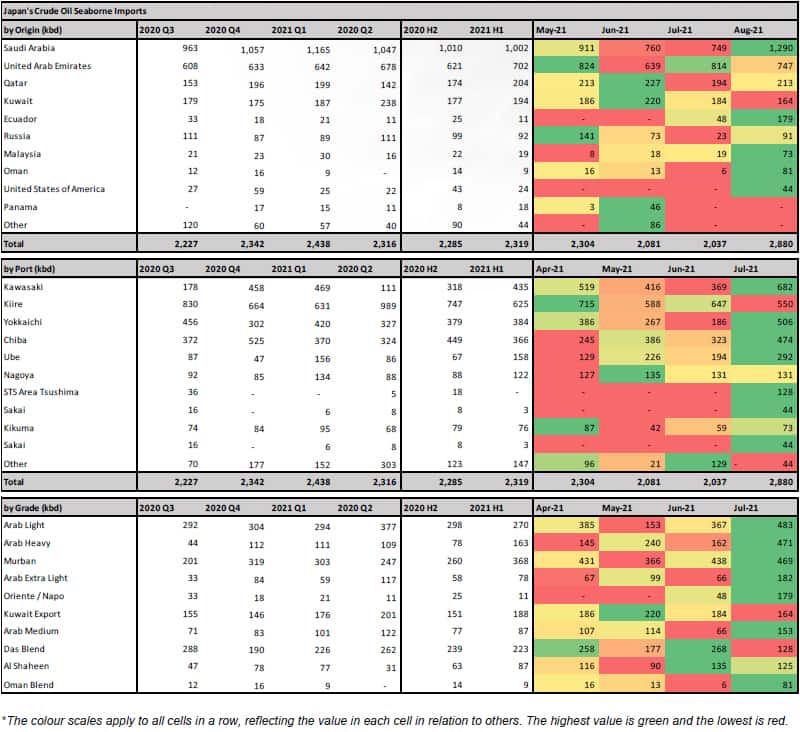