Monthly GDP declined 0.5% in February following a 0.8% increase in January that was revised higher by 0.1 percentage point. The February decline was less of a decline than we had previously anticipated, largely reflecting less of a slowing in inventory-building than we had previously assumed. Still, the decline in monthly GDP in February was more than accounted for by inventory investment, with domestic final sales little changed and net exports rising somewhat on the month. Averaged over January and February, monthly GDP was 3.0% above the fourth-quarter average at an annual rate. Implicit in our estimate of 2.8% GDP growth in the first quarter is a 0.1% increase of monthly GDP in March. 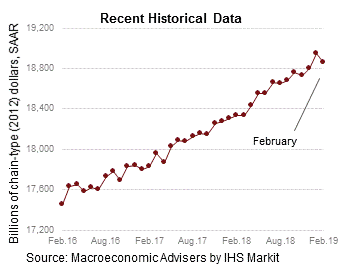