On 24 February 2019, Moldova held a parliamentary election to select its 101 MPs, which produced a hung parliament.

Turnout was registered at 49.22%, versus 55.85% in the previous election in November 2014. The election was held using a parallel voting system that was introduced in 2017, with 50 MPs elected by proportional representation in a single nationwide constituency, and the other 51 elected in single-member constituencies. In the proportional representation vote, the pro-Russian opposition Socialist party (Partidul Socialiştilor din Republica Moldova, PSRM) of President Igor Dodon received 31.2% of the vote, pro-EU and anti-corruption opposition ACUM bloc received 26.8%, the incumbent and nominally pro-Western Democratic party (Partidul Democrat din Moldova, PDM) received 23.6%, and the Sor party, led by businessman Ilan Sor received 8.3%. The other 11 parties failed to reach the 5% threshold. With those MPs elected in individual constituencies, the PSRM won a total of 34 seats, the ACUM bloc 27, the PDM 30, Sor party seven, and independents won three seats (see chart) in the 101-strong parliament.

The election has produced a highly fragmented parliament with no party having a simple majority. This will complicate government formation, as forecast. Although the pro-Russian PSRM has the highest number of MPs in the new parliament, it is unlikely to be able to form an administration on its own as both the pro-EU ACUM bloc and the previously ruling nominally pro-Western PDM party would oppose such a move. PSRM's inability to form a government by itself makes any policy overhaul and reorientation towards Russia, and away from the EU, unlikely.

ACUM, which campaigned on the platform for closer links to the EU and against the alleged corruption in the previous PDM-led government, is unlikely to join coalitions with either PSRM or PDM. Before the election, all ACUM candidates signed a collective agreement to avoid entering into any coalition proposed by these two parties. PDM would be likely to negotiate with the Sor party (which lacks a strong ideological platform) and the three independent MPs to establish a broader coalition, but this would give them only 40 votes, versus a required parliamentary majority of 51. PDM would potentially attempt to engineer defections of MPs from PSRM or ACUM bloc by promising them positions of power in the cabinet to gain a parliamentary majority but we assess that such switching is less likely now than in the past. If PDM manages to establish a cabinet, it would be likely to retain the current set of policies. This includes a general orientation towards the EU, however lack of anti-corruption drive which have led to accusation by the opposition of the PDM attempting to establish a "captured state" situation.

On 25 February President Dodon announced plans to dissolve parliament and hold a new parliamentary ballot if the parliamentary parties fail to agree on a coalition. His opposition PSRM party also demanded that elections be repeated in at least six constituencies, including two in Transdniestria, which could produce a different allocation of seats if accepted. If a second national parliamentary election were held in the three-month outlook, it would be likely to produce a different outcome. Alongside the election, Moldova held a consultative referendum, in which the majority of respondents voted to reduce the number of MPs from 101 to 61 and dismiss those incapable of performing their official duties. A reduction in the number of constituencies in the next election would likely favor the larger parties, and probably would eliminate the three independents.

Delays to government formation and accusations of voting irregularities in the latest election have the potential to mobilize protesters to engage in large-scale and potentially violent demonstrations, which would force politicians to decide on a repeat election. Also, the delays and a potential repeat vote would establish policy gridlock in Moldova for the next three to six months. This would further delay implementation of EU-mandated reforms and any negotiations with the IMF and other international institutions. 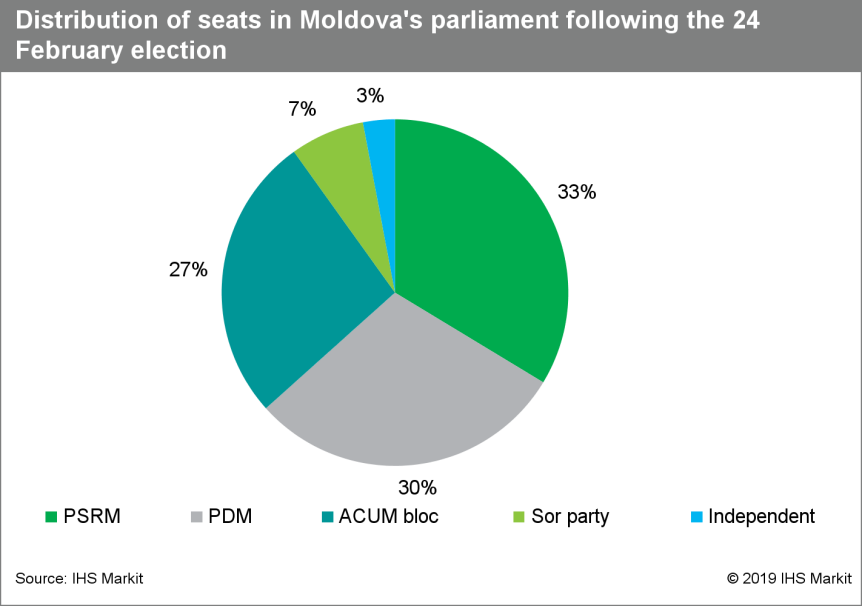 Just last week on our podcast we discussed the astronomic lumber prices. This week our #MPI shows that they have n… https://t.co/F4jt0mI82L