The largest milk processing plants in Brazil collected larger volumes in 2019 versus the previous year, according to the Brazilian Association of Milk Producers (Leite Brasil).

This is despite the overall fall in total collection in Brazil, which dipped by 7.1% y-o-y nationally, to 33 bln litres.

The 13 main dairy industries accounted for 23.9% of the total milk collection last year with a total capacity of 11.2 bln litres.

Nestlé, remained the leading collector among the major milk companies in Brazil, though its volumes fell by 8.3% y-o-y to 1.48 bln litres.

The Swiss company sold its UHT milk operations to Laticínios Bela Vista, owner of the Brazilian brand Piracanjuba, which was in second place in the ranking, with 1.46 bln litres, 5.1% higher y-o-y.

However, the ranking does not include volumes collected by the French company Lactalis, the country's largest dairy conglomerate, and Goiasminas, owner of the Italac brand.

In 2019, Lactalis ended a dispute which began in 2017 with Mexican Lala, owner of Vigor, and took control of Itambé. Together, Lactalis and Itambé collect an average of 2.3 bln litres of milk per year.

Overall, last year was marked by tight margins for milk industries, when an increase in demand was expected amid better economic conditions, which did not occur. Moreover, the optimistic outlooks made at the beginning of this year have now given way to uncertainties caused by Covid-19.

Foodservice chain closures, which consume more than half of the cheese produced in Brazil, is raising concerns about the milk surplus and may lead to further discouragement for milk output in the country. 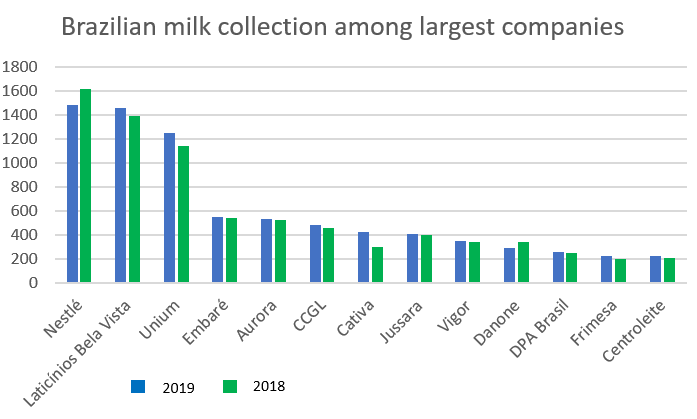