Military aircraft renaissance: expansion to be driven from the commercial sector

The military aircraft market is undergoing a huge renaissance. The days of traditional Cold War players sparring for Hercules or Ilyushin sales in their respective captive markets are over. New players, often with civil airliner experience, are entering the market with support from their respective governments. A recent example of this new trend was seen last December, when US and Brazilian defence and aerospace companies Boeing and Embraer announced that they are engaged in talks around a potential merger.

The market for military fixed wing aircraft of all classes has ‘exploded’ as nations improve or expand both tactical and strategic capabilities, and leverage decades of commercial aircraft product development and learning. This market phenomena covers everything from the single engine Pilatus PC-12, to the twin-engine Airbus Defense and Space (DS) C295 and Alenia C-27J, the four engine tactical market leader Lockheed Martin C-130J Hercules, the mammoth Airbus DS A400M, and newcomers Embraer KC-390, Kawasaki C-2, and a host of other lesser known types.

Looking ahead, Jane’s sees a rapid expansion of demand for airlift-type aircraft needed for moving troops and materiel to support operations, often in very austere environments. Companies like Embraer from Brazil, Airbus from Europe and Xi’an from China are disrupting the historic norms, using their civil design and manufacturing experience to build highly competitive lifters. This is coupled to indigenous demand from nations guaranteeing a launch market, while countries such as New Zealand, Singapore and South Africa show interest in replacement programmes.

Jane’s Markets Forecast shows the overall market for this type of aircraft rising from 50 units per annum in 2007 to some 200 units per annum by 2027, so competition and diversification will increase as this market continues to fragment in the next decade. 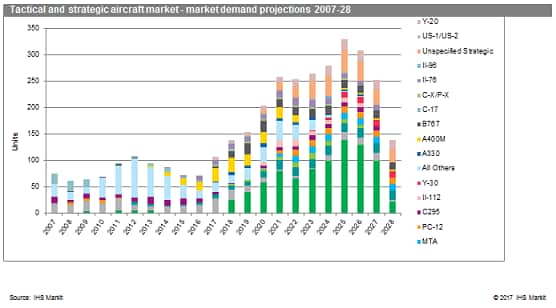 Although Boeing and Embraer have previously co-operated on defence programmes including the development of the latter’s KC-390 tactical transport aircraft, it is likely that their current discussions have been prompted by developments in the commercial aviation market.

Following Boeing’s successful pursuit of punitive US import duties against Canadian aircraft manufacturer Bombardier, Airbus announced in October that it would take a controlling stake in the company’s C Series small commercial aircraft, whose pricing had prompted the action.

Boeing’s move to seek greater partnership with Embraer, which also focuses on the market for smaller passenger aircraft, may well represent an effort to match its commercial rival’s expanding capabilities in a corner of the market in which it is not particularly strong.