Cargo theft is an attractive source of revenue for organized criminal groups and local gangs in Mexico. While the nationwide trend for cargo theft in Mexico has been on a slightly downward path after peaking in 2018, there are still about 800 monthly reported incidents (with the real number likely to be much higher). Fluid localized security dynamics mean certain states or individual highways can experience short-term spikes in both cargo thefts and broader security risks to road users, as is the case of the Mexico City-Veracruz motorway. We highlight some of the main risk hotspots along this critical transportation route.

The 150D federal motorway from Mexico City via Puebla and Veracruz states to the Port of Veracruz is one of the most important routes for road cargo in Mexico, connecting the country's main port to Mexico's capital. This route, however, has some of the country's highest rates of cargo robberies as well as kidnapping, injury, and death risks to transport sector employees. Our data indicate that cargo vehicles transporting grocery goods, construction materials, and car parts are the primary targets along this route, while private vehicles are at risk of holdups. Risks are particularly high in sections with roadside retail and restaurant outlets, with both transporters and private drivers at risk of being mugged or having their vehicles and cargo stolen while stopped there.

As Mexican manufacturing and textile production recovery continues in 2021, it is likely that the resulting increased cargo volumes will incentivize criminal groups into increasing their efforts to target trucks along this route. An escalation of local communities seeking to loot basic goods or merchandise they can sell, especially when lorries are forced to stop because of mechanical failures, is also likely. Furthermore, it is likely to be a driver of turf wars along this route as up to 30 local criminal groups compete for access to key cargo theft hotspots in the municipalities of Texmelucan and Amozoc in Puebla state and Maltrata, Orizaba, and Córdoba in Veracruz state.

Narco-messages (threatening graffiti and banners), shooting incidents, and targeted assassinations in Orizaba, Córdoba, and Fortín de las Flores are likely due to competition between remnants of the Los Zetas cartel and the Cartel del Golfo, as well as the much stronger Jalisco Nueva Generación Cartel (CJNG) for the main drug trafficking routes through Puebla and Veracruz states. Exchanges of gunfire between rival cartels or cartel members and police occasionally result in collateral damage to vehicles or the injury or death of bystanders on this route - a low but presenting risk that is unlikely to change significantly through 2021. Cartel-linked cargo tampering such as the piggybacking of illicit cargo onto commercial cargo shipments or outright theft of cargo shipments are most likely at the Port of Veracruz where CJNG activities have been expanding since 2019. 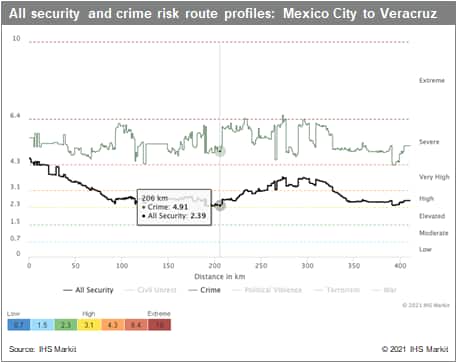 According to SESNSP statistics, Puebla state recorded the greatest decline nationally in road cargo robberies over 2020, falling by 55% to 966 recorded incidents from 2,127 incidents reported in 2019. This was likely due to an overall decrease in cargo volumes because of the COVID-19 pandemic-related slowdown and likely aided by coordinated business-state effort through the launch of a C4 Immediate Response Centre to increase security force responsiveness to carrier incident reports, according to the National Association of Private Transportation (Asociación Nacional de Transporte Privado: ANTP). IHS Markit assesses that a rebound in incidents along this route is likely in 2021 as cargo volumes recover post-pandemic and particularly if dedicated anti-cargo-theft operations are not sustained through the post-pandemic recovery.

In Veracruz, cargo theft experienced a 57% increase from 148 incidents in 2019 to 232 incidents in 2020 despite the pandemic conditions and falling cargo transportation volumes. 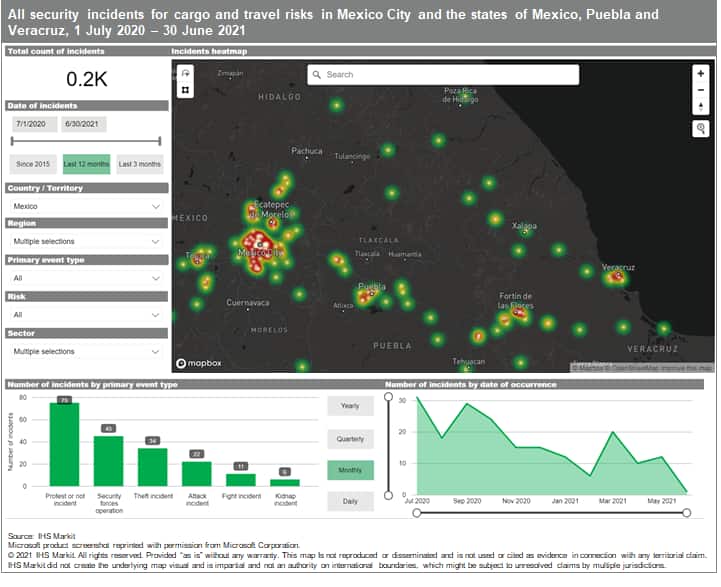 As our Global Security Incident Trends Dashboard shows, captured cargo and travel risk-related crime incidents over the last 12 months included not only attacks and theft, but protests, security force operations, and reported kidnappings. This highlights that incidents in these states are concentrated in the municipalities of Texmelucan, Puebla, Maltrata, Orizaba, Fortín de las Flores, Córdoba, and Veracruz.

Read the full report which highlights the critical incidents along the three main segments of roadway: Mexico City-Puebla, Puebla-Córdoba, and Córdoba-Veracruz.