Medical lasers: a growing market to treat health and aging

Medical lasers allow high levels of precision to physicians, while inflicting less damage on the surrounding tissue of those being treated than through other treatment techniques. The benefits to patients may include less pain, less scarring, and faster recovery time.

In general, lasers facilitate less invasive surgical procedures. For the aesthetic market in particular, the decline over the years in the cost per procedure associated with lasers, coupled with the increasing general acceptance of cosmetic surgery, has served to attract a broader base of patients.

Many applications for medical lasers also stem from procedures that treat conditions related to age. With the volume of these procedures expected to keep increasing, and with people all over the world for the most part experiencing growing longevity, opportunity is strong for medical lasers to enjoy continued growth as a replacement to traditional modalities across all applications.

However, the medical laser industry is subject to intense competition. For instance, forming part of the research for the IHS Markit report on medical lasers was a group of more than 50 vendors-manufacturers that compete with laser and other energy-based products offered by public companies, with several smaller specialized private companies, and in the future with new companies likely to enter the market. The same group of vendors must also compete with non-laser and non-light-based medical products, including traditional cutting tools and drills; other advanced technologies, such as ultrasound and radiofrequency (RF); and electrosurgical devices. Furthermore, pharmaceuticals are often utilized and so also serve as another form of competition.

Aside from competition, another weakness of the medical laser industry stems from the relatively high cost of equipment, along with the resistance proffered by some physicians who do not believe lasers to be a beneficial alternative when compared to traditional treatment methods.

Overall, the world market for medical laser systems, consumables, and maintenance posted total revenue of $2.9 billion in 2016. Medical laser systems represented the largest sector, with sales of $2.0 billion. By 2022, revenue is forecast to hit $3.7 billion, equivalent to a compound annual growth rate of 10.4% for the six-year period. 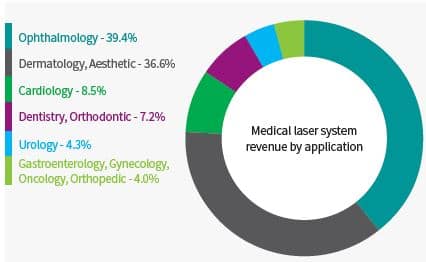 The key drivers for the medical laser market include:

The most common medical laser types in 2016 were CO2, Nd:YAG, and diode:

The United States and Western Europe combined represented the majority of global 2016 medical laser revenue, accounting for 59.4% of the total market. Robust expansion is forecast for both regions through 2022. In comparison, the Eastern European market is one region experiencing constraints because of lingering poor economic conditions, even though the area is expected to see strong growth during the forecast period.

In the Asia Pacific region, Japan has been driving growth. However, China's expanding middle class is expected to lead in investments in personal care, which will account for the increased use of medical lasers.