Much discussion has been given in the past weeks about the potential impact of logistical bottlenecks on global fertilizer markets. With today's edition of our Covid-19 update, we thought it useful to try and quantify this impact in the very-short-term.

In other words: what does it really mean for a country to be "disrupted" for a week?

In this piece, we will focus on phosphate fertilizers: DAP, MAP, other NP products, complex (i.e. chemical) NPKs, and superphosphates (be it single, double, or triple). Fertecon regularly assesses the performance of production/demand/trade in its dedicated publication Phosphate Outlook - having just run through an overview of full-year data available for 2019, we thought it a good time to share some of this with our subscribers.

Global demand in 2019 for all these products combined is estimated at around 48.5 million tonnes when looking at the P2O5 content of these products (many of which also carry nitrogen/potash/sulphur). While this is an important measure of total demand, logistical bottlenecks will limit physical movement, making a look at tonnes product worth our time: the aforementioned 48.5 million tonnes nutrient relate to slightly more than 150 million tonnes product for the calendar year.

This is a fairly sizeable number - which translates into an average of 2.9 million tonnes each week. Focussing on internationally traded volumes only, the figure decreases to a still sizeable 1.1 million tonnes per week - a figure which is likely to be much higher during peak import times (typically around Q2-Q3 each year) and slightly lower otherwise. Nonetheless, a key starting point: every week, the world "needs" more than 1 million tonnes to be loaded somewhere and equivalently unloaded elsewhere to keep phosphate fertilizer flows smooth.

From a production point of view, this is equivalent to the annual capacity of some of the largest single-train granulation units worldwide; when thinking with a seaborne trade, that's about 20 fully-loaded Panamax cargoes. Looking further in detail in specific countrie the picture becomes even more striking: taking Brazil as an example (which receives about 185,000 tonnes of phosphate fertilizers per month on average) and assuming an average truck size of 45 tonnes, that's more than 4,000 trucks continuously on the road carrying product - again, for imported phosphate-bearing products only, and not including domestic SSP production, urea, or potash!

All of these figures are mentioned to strengthen one important point: smooth flows are important. Even more so at a time like today's unprecedented scenario, where sudden policy changes could affect key logistical nodes significantly with little or no notice. As Fertecon expected those knee jerk reactions that we have seen since the wider outbreak took hold last month were generally short-term impacts which were soon eased (after all fertilizers are considered by all countries so far as "essential" businesses, supporting crop - and therefore - food production). Nonetheless, such short-term disruption can have important implications.

To better understand this, below is a visual representation of import flows and of the relative importance of some countries in terms of phosphate imports. What is clear from this visualization - albeit imperfect - is that the role of the overall EU market, Brazil and India is of paramount importance when looking at global balances. 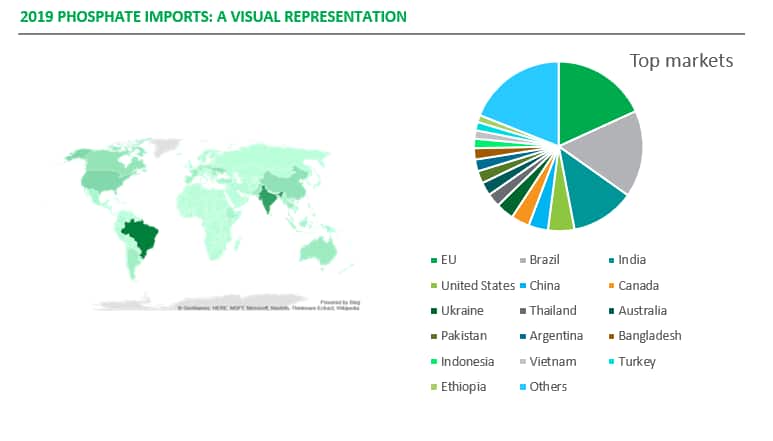 More specifically, these countries require weekly import flows as described in the following table (ranked from largest to smallest). Rather than focussing on the actual numbers themselves, the relative comparison is perhaps of more importance. A 1-week full lockdown at Brazilian ports would not be easily absorbed by India alone for example, and in any case its impact would be distributed across more than 1 week as no other country may have prompt availability of port terminal capacity given their own average import flows.

All numbers are simple averages and have not been adjusted for seasonality - therefore they represent in fact an understatement of actual requirements during peak seasons.

The difficulty in replacing a market with alternative outlets is reflected more than proportionally on the market's supply side, which is understandably even more concentrated in fewer production (and export) hubs, as shown below. Disruption to some of the world's largest exporters will hardly be replaceable by other suppliers in the short term: spare capacity (where available) will take time to be brought back into production, and in general there are not too many options with sufficient spare capacity anyway.

As stated, and we cannot stress this enough, currently there is no sign of total disruption in key phosphate production sites - even in the Chinese province of Hubei, the epicentre of the Covid-19 pandemic, production has already resumed as normal after about 6 weeks of partial curtailment. Availability of workers on site has been a concern for some producers, who opted to operate at lower rates (e.g. in India and Tunisia), but the timing of this pandemic broadly matched seasonally low exports, and ended up affecting the timing of planned maintenance/turnarounds rather than total production levels.

If anything, producers are maintaining healthy operating rates, benefitting from sustained import demand. At times when disruptions are always around the corner (and when capital is cheap thanks to preferential loan rates in many countries) it is easy to see why importers would willingly frontload their requirement and build up stocks. How long this can last is yet to be seen.

One potential impact of this new pressure on logistics will be the choice of product. On the one hand, higher-grade material (e.g. DAP/MAP) which can be more easily stored and sold later (possibly as part of a bulk blend) might be the preferred choice as opposed to lower-grade products (e.g. NPS 20:20:13S or NPK 15:15:15) which instead occupy the same physical space while bearing lower amounts of nutrients. On the other hand, multi-nutrient fertilizers minimize the overall number of dispatches/shipments required, which in itself could be an interesting feature for smaller markets facing the strongest bottlenecks.

For more information on access to the actual statistics presented in this short commentary please feel free to reach out directly to Alberto Persona, our Principal Analyst overseeing our long-term phosphate offering.