On 5 June the BLS reported payroll employment advanced 2.5 million in May; we, and nearly all forecasters, anticipated a large decline. The unemployment rate fell from 14.7% to 13.3% instead of rising to the consensus estimate of 19%.

Expectations of declining employment were based on initial unemployment claims between the April and May surveys, while continuing claims (in all programs) near 30 million suggested a large rise in unemployment. However, initial claims reflect only job separations, and apparently significant rehiring began in May. In addition, it is likely the large number of persons BLS misclassifies as furloughed but employed are in fact unemployed and collecting benefits. It may also be that the numbers are so large and changing so rapidly that problems processing and reporting claims have temporarily degraded the reliability of the claims data.

While the survey response rates were low, BLS considered the estimates to be of acceptable quality and we see no compelling reason to dismiss the numbers. However, they were so far from expectations that we've taken the unusual step of updating the June forecast to reflect these developments. 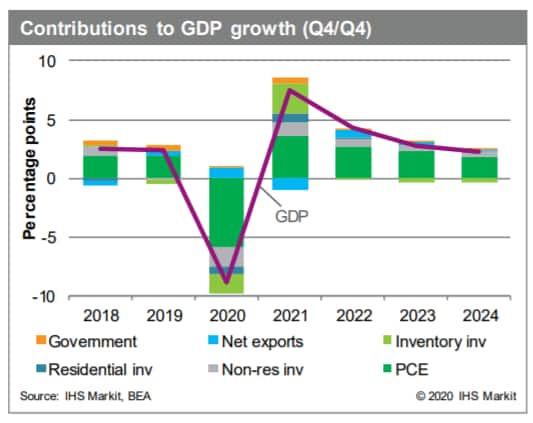 Posted 09 June 2020 by Chris Varvares, Vice President and co-head of US Economics, IHS Markit and