May forecast shows a sea of red states

Our May state-level forecast has been released and features a few notable near-term changes as we continue to refine our outlook in light of recent COVID-19 developments and new economic data. Our 2020 forecast for employment and output were marked down further to incorporate an even deeper second-quarter shock as the unprecedented decline looks even worse as new economic data become available. We also revised our near-term migration, and in turn, population forecasts as the current environment slows both interstate and international movement within and to the United States.

Every state will experience significant employment and GDP declines this year given the sudden and deep economic shocks associated with the virus escalation, containment efforts, and associated effects. Those declines are more severe in the May vintage with all states seeing their outlook worsen this year. Nevertheless, the extent of those declines can have a great deal of regional variation.

States most dependent on tourism and manufacturing will see the deepest near-term declines. The leisure/hospitality sector is a driving force behind the outsized losses in Florida, Hawaii, and Nevada. The Midwest has been hit especially hard by the plunge in the factory sector as plants grapple with virus concerns and demand destruction. The states poised to see the least devastating losses are generally more rural and less densely populated, with the Plains states poised to hold up best. 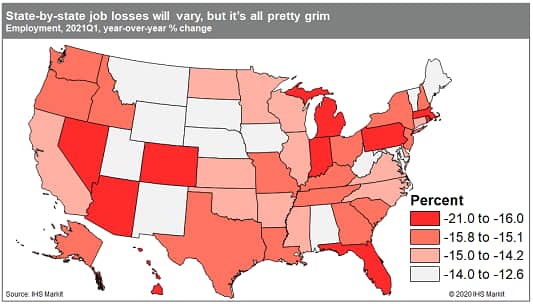 A gradual reopening of the economy is under way, which will pave the way for an initial recovery as we move through the latter part of this year. States are easing restrictions in phases, with timing and specific protocols varying by state. Ultimately, a return to "normal" conditions will be slow with the ever-present virus risk continuing to curtail previous spending patterns. As such, it will take years to recoup the dramatic job losses this year. A return to pre-pandemic employment levels is not expected until early 2024 at the national level, with the South returning sooner and the Northeast and Midwest lagging.

In addition to the more dramatic near-term economic declines, we are assuming lower migration levels over 2020 through early 2022. The drop-off will be most severe this year. Levels will then gradually increase over 2021 before getting back to "normal" trends in mid-2022. We expect a degree of pent-up demand over the latter half of 2022 and into the first half of 2023. International migration levels will take a bigger hit than domestic given the US travel and border restrictions aimed at protecting public health. While state borders remain open for domestic movers, levels will soften nonetheless. A dearth of job opportunities will curtail interstate movement for employment reasons, with health concerns, social distancing efforts, and uncertainty further weighing down mobility.

Lower international migration will be a negative to population growth in every state but be most pronounced in areas that are typical hotspots for immigration activity. Domestic migration is a different story in that it is a net positive in some states and net negative in others. For states that struggle with persistent outmigration, the current environment will slow the rate of people leaving and serve as a positive force for overall population growth. Conversely, "destination" states stand to be hardest hit. 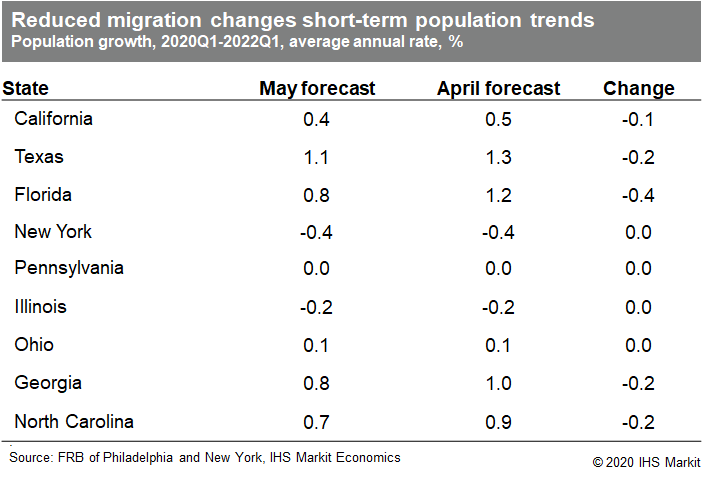 These dynamics are evident when looking at the most populous states—the nine listed all have populations of over 10 million. The states in the Northeast and Midwest are seeing essentially no change in the population growth rate over the next two years as lower international migration is largely offset by fewer people leaving for other states. Conversely, Florida sees the biggest markdown given its high levels of both domestic and international movers. The other Southern states here, Texas, Georgia, and North Carolina, will also see noticeable softening in near-term population growth until migration gets back to pre-pandemic trends.