India's crude oil imports dropped to 2.82 million b/d in June, the lowest observed at least since early 2017, according to data by IHS Markit Commodities at Sea. Consumption and demand were highly affected earlier this year, especially during the lockdown, but we have started receiving the first signals of a quick recovery. India imported 5.14 million b/d of crude oil in July, up 82% month-on-month and 23% up year-on-year. This has been the highest recorded so far in Commodities at Sea, suggesting that the country quickly filled the gap developed in June. The average of June and July stands marginally below four million b/d, very close to levels of normal activity.

High volatility is expected to become the new normal in India's oil demand, as COVID-19 seems to be highly affecting the population's habits. Much more people recently started preferring to commute with their own vehicles, which could be a considered parameter having an impact on crude oil imports and demand for fuels. If this trend lasts, crude oil imports could be further strengthened while the domestic market could potentially absorb more refined products, keeping clean exports at low levels.

Indian Oil Minister Dharmendra Pradhan expects that fuel demand in India will rebound to pre-crisis levels by the end of September.

June's crude oil imports were pushed much lower as several oil refiners decided to proceed with maintenance. Volumes increased rather quickly in July, but the risk of more parts of the country being under local lockdowns and the monsoon rain season could shape both demand and shipments very differently in August. 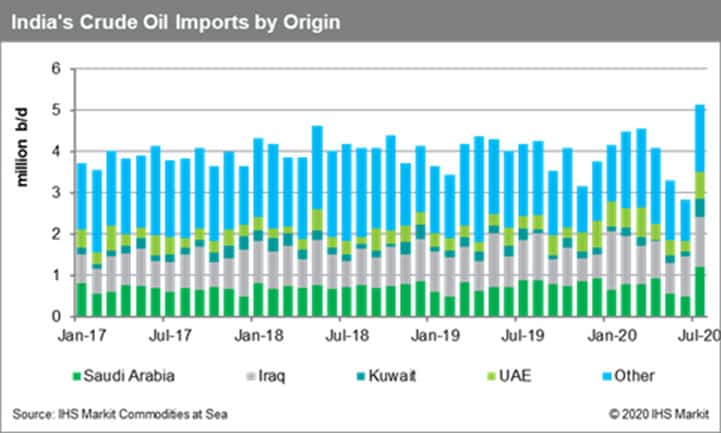 Imports of crude oil from both Saudi Arabia and Iraq increased impressively, with flows from each country surpassing 1.2 million b/d in July. This has been a massive growth of 154% for Saudi Arabia and 24% for Iraq month-on-month.

Meanwhile, oil product exports fell further in July, down about 4.6% month-on-month and 21% since last year. This has been primarily driven by the decline observed in diesel exports. Some refineries have been under maintenance since late third quarter of 2020. 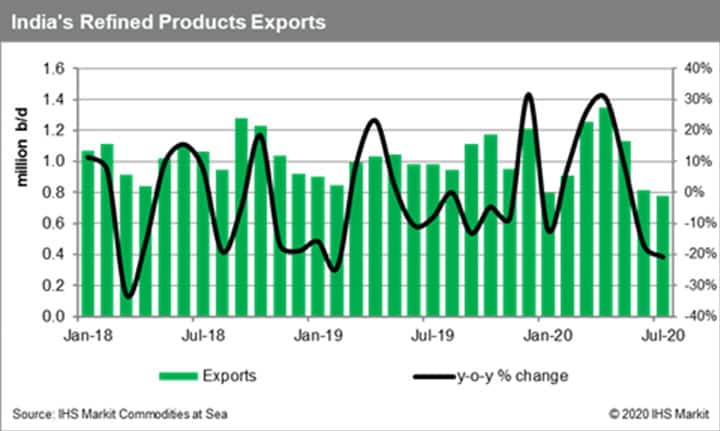