Maruti Suzuki has capitalised on a shift in India's urban consumption from A-segment to B-segment vehicles.

Maruti Suzuki has maintained its market leadership through the four months of calendar year 2016 and also improved its market share. This results from the automaker's strategy to enter segments where it was weak or had no presence. During the first four months, the automaker sold 450,438 units in India, giving it a 41% share in India's light vehicle market, comprising vehicles with gross weight of 6 tonnes or less. This is up from a share of 39.9% in the same period last year.

During the year to date (YTD) period, the Swift Dzire compact sedan emerged as the best-selling nameplate with a volume growth of 20.4% year on year (y/y) to 93,332 units. The Swift Dzire relegated to second place the Alto800, which posted sales down 13.1% y/y to 69,412 units. The Wagon R registered a 4.3% y/y decline in sales as third best-selling vehicle, with YTD volumes of 52,806 units. The Wagon R was helped by a 24.5% y/y slide in the sales volumes of the Swift hatchback, which was pushed to fourth with sales of 50,768 units. Omni occupied the fifth place in Maruti's list of best-selling vehicles, with a marginal dip in sales to 27,617 units. 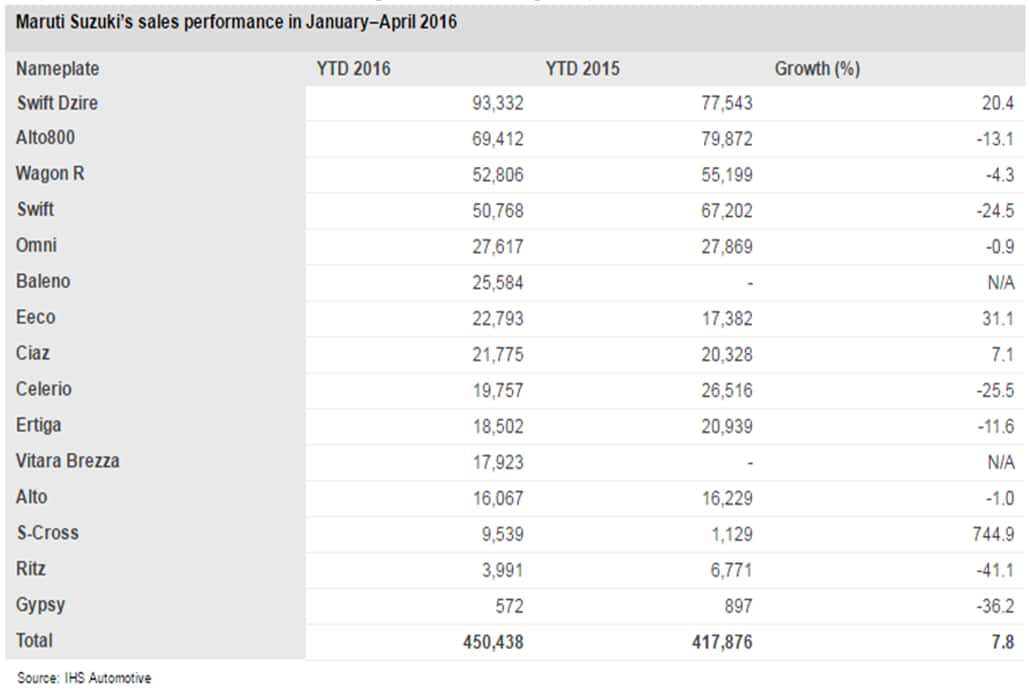 A look at Maruti's product portfolio and its performance in the first four months reveals the contrasting fortunes for its nameplates. While the ranking of top five models may not give an indication of the fundamental shift underway at the automaker, the next five rankings capture this change succinctly.

All of Maruti Suzuki's traditional best-sellers, with the exceptions of the Swift Dzire sedan and Eeco van, suffered volume declines during the period. Yet the automaker's sales volumes expanded by 7.8% y/y, or 32,562 units. Given the wide underperformance of Maruti's traditional models, it is easy to see that all this growth came from new models such as the Baleno premium hatchback, Ciaz mid-size sedan, and Vitara Brezza compact sport utility vehicle (SUV). Interestingly, all these models belong to segments where Maruti had previously met with failure or only limited success. This was part of a well thought-out strategy by the automaker to expand into new bodystyles and price points, reaching more affluent buyers in the process. As urban consumption is gradually migrating from A-segment to B-segment, timely identification and execution on the trend has yielded excellent dividends for Maruti.

The strategy was unveiled by the automaker nearly one and half years ago with the launch of the Ciaz mid-size sedan. Maruti's earlier attempts to gain a foothold in the segment were with the Baleno (launched as a sedan in an earlier version) and the SX4, neither of which impressed buyers. Nevertheless, the Ciaz has proved a worthy competitor of the segment-leading Honda City, which sold 24,372 units during the first four months while registering a decline of 24.2% in volumes.

Another pillar of strength for Maruti in recent months has been the Baleno premium hatchback, which is sold exclusively through its Nexa premium dealership network. The Baleno was introduced at attractive price points, which helped to gain volumes from competitors as well as to attract buyers from Maruti's Swift. The vehicle has not only emerged as the best-selling model in the niche. Its four-month volumes were also ahead of the combined sales of the Honda Jazz and Volkswagen (VW) Polo in the same period.

Maruti was a latecomer in tapping the compact SUV segment, lagging its competitors Ford and Renault. But the Vitara Brezza has quickly overtaken Ford's EcoSport and Renault's Duster in monthly sales following its launch earlier this year. Although the vehicle is still too new in the market to be considered a winner conclusively, initial demand is strong. IHS Automotive forecasts the vehicle will sell nearly 76,000 units this year in India, comfortably overtaking the Mahindra KUV100, Ford EcoSport, and Renault Duster and staying second only to Hyundai Creta.