The IHS Markit/CIPS UK Manufacturing PMI indicated that output growth slowed in April, despite some firms reporting a boost to production from pre-Brexit stock building. Worse may be to come, as forward-looking indicators suggest production could fall in coming months as the inventory build unwinds and supply chains shift. Hiring has already been hit as a result.

The survey's output index fell from a 10-month high in March, partly because fewer customers built up safety stocks ahead of a potentially disruptive Brexit, though many companies continued to report that stock piling helped drive production higher. One-in-five companies that reported an increase in production in April attributed the rise to Brexit related stock piling. However, that was down from one-in-three in March. 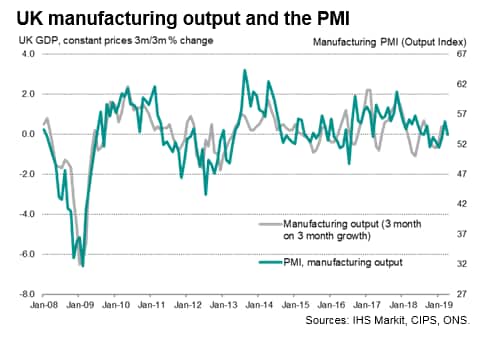 The worry is that the unwinding of recent inventory building is likely to act as a drag on production growth in coming months, as illustrated by the forward-looking new orders to inventory ratio. A record increase of stocks in recent months has coincided with a dearth of new orders, pushing the orders-inventory ratio to its lowest since May 2012, and its third-lowest since the height of the global financial crisis in early-2009. At current levels, the ratio points to a marked downturn in production.

However, not all sectors have benefited equally from the Brexit-related stock build. UK producers of consumer goods and investment goods (such as equipment and machinery) have seen a Brexit boost from stock piling by overseas customers, thereby lifting exports in recent months (albeit with some tail-off seen in April). In contrast, exports of intermediate goods (products used as inputs by other companies) have fallen continuously since the middle of last year, in part due to EU customers now sourcing from non-UK EU suppliers. 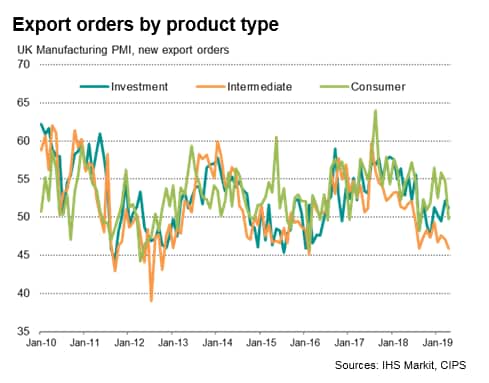 The employment index from the manufacturing PMI is another point of concern, suggesting factories have pulled back markedly on hiring over the past year. Having signalled buoyant jobs growth this time last year, the survey is now consistent with the official measure of manufacturing payroll numbers falling. 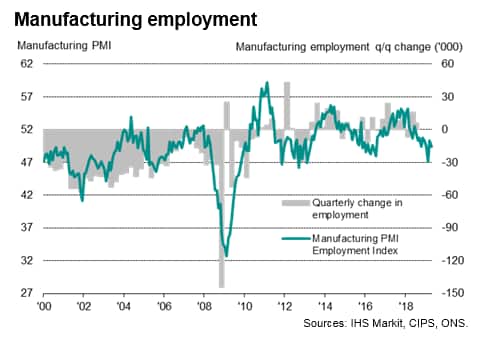