Worldwide PMI surveys indicated that manufacturing more or less stagnated again in March, with growth of business activity continuing to run at its lowest for almost three years. The malaise largely reflected weaker trade flows, with worldwide exports falling for a seventh straight month to contribute to the weakest overall order book trend since 2012.

Developed world manufacturing conditions failed to improve for the first time since 2012, fueled by the steepest decline in the eurozone since 2013 and disappointing trends in the US and Japan. But emerging markets saw the best performance since last July, buoyed by improved business conditions in China.

The headline JPMorgan Global Manufacturing PMI, compiled by IHS Markit, held steady at 50.6 in March, thereby remaining at its lowest level since June 2016. 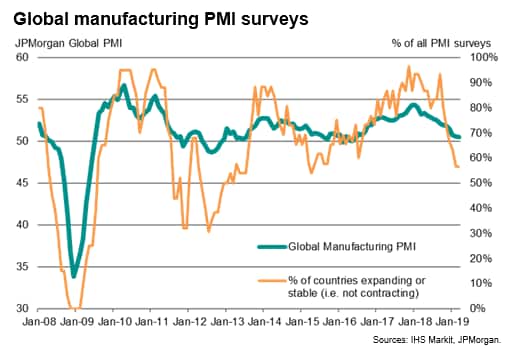 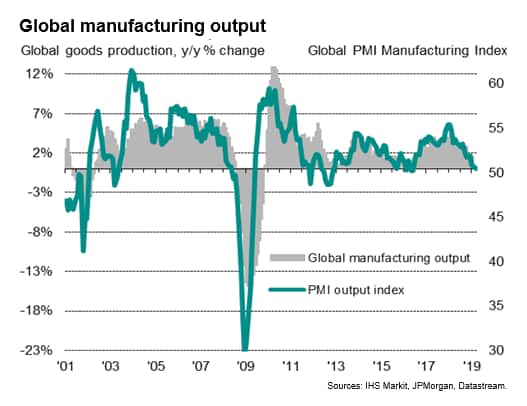 The PMI is a diffusion index derived from five survey questions, where 50 indicates no change in business conditions compared to the prior month. At current levels, the PMI therefore signals only a marginal improvement in the health of the global manufacturing sector, the rate of growth having weakened considerably over the course of the past year.

The number of countries that reported a deterioration or stagnation of manufacturing conditions, defined as a PMI reading at or below 50, remained steady at 13 out of the total of 30 (up markedly from just two at the start of last year), but the composition changed. Importantly, China saw a renewed improvement, as did Spain and Thailand.

In contrast, France and Mexico joined the ranks of countries which saw conditions worsen while Austria slipped into stagnation.

The UK enjoyed the fastest growth, though business was boosted by record stock-piling at manufacturers and their customers ahead of a potentially disorderly Brexit. Especially marked improvements were also seen in Greece, Ireland, Russia, Brazil and India.

Germany saw the steepest deterioration of business conditions, followed by Malaysia and Turkey. Other notable countries reporting a worsening of business conditions included Japan, France, Italy and Mexico, as well as the Eastern European countries of Poland and the Czech Republic, which in part reflected weakening supply chain demand from the eurozone, especially Germany.

Looking at the major developed economies, the eurozone as a whole contracted at the steepest rate for nearly six years, and Japan remained in its first period of decline since mid-2016, with the PMI below 50 for a second successive month. Growth meanwhile sank to a 21-month low in the US. Measured overall, developed world manufacturing stagnated, failing to grow for the first time since 2012.

There was a brighter overall picture in the emerging markets. The Caixin PMI for China moved above 50 for the first time in four months, signalling the strongest monthly improvement since last July, and the PMI for Russia meanwhile hit a 26-month high. India's upturn lost momentum, but reasonable solid growth was again recorded. The ASEAN region meanwhile saw a return to improving business conditions for the first time in three months. Measured overall, the emerging market manufacturing PMI rose to its highest since last July. 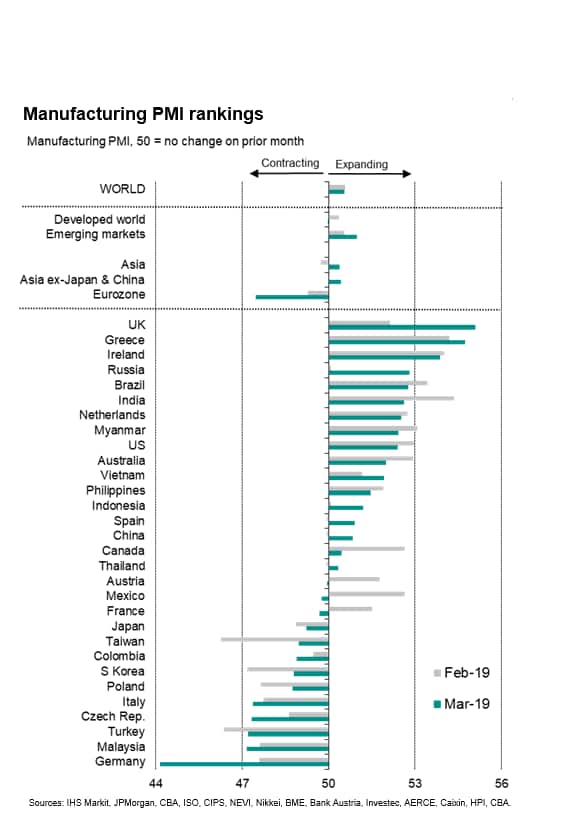 Looking into the details of the sub-indices, global factory output barely rose in March, registering the weakest increase since June 2016 on the back of a second successive month of stagnant new order inflows. The flat order book picture is the worst seen since 2012. 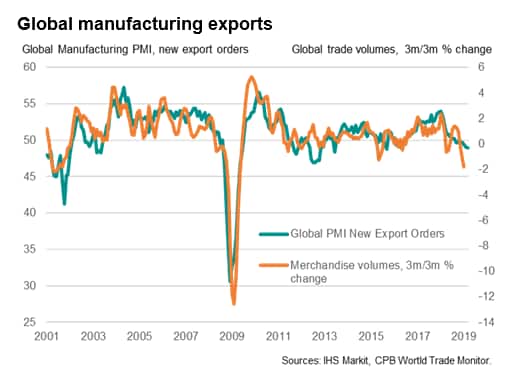 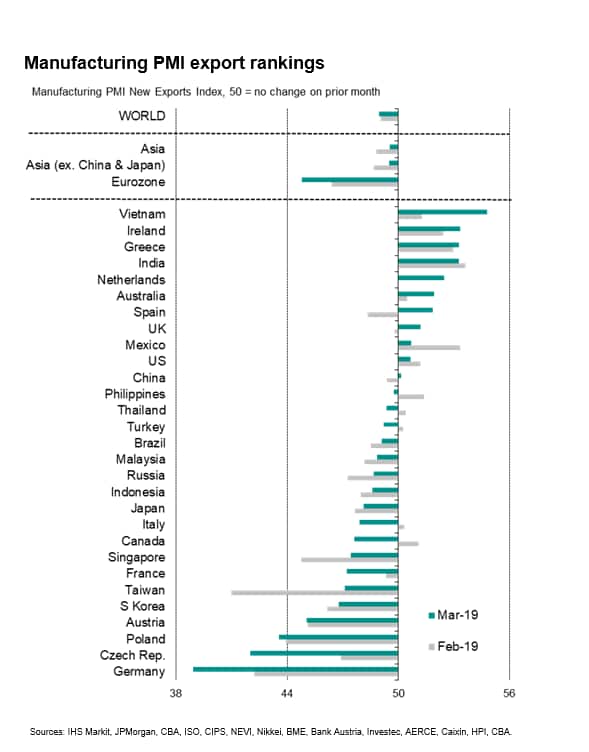 In a further sign of excess capacity developing, backlogs of orders fell at the steepest rate for six years, down for a third successive month as completed work was not fully replaced by new business. Employment growth consequently remained unchanged on the lacklustre pace seen in prior months and input purchasing fell for a second straight month.

Expectations of future output meanwhile ticked higher from the near seven-year low recorded in February but remained subdued and well below levels seen this time last year.

One positive development from the recent waning of demand growth has been an easing of supply chain delays to the lowest seen since October 2016. Delivery times are closely correlated with price pressures (longer deliveries usually mean suppliers are busier and can more easily raise prices, and vice versa), and the easing in supplier delays has - alongside lower oil prices - helped bring raw material price inflation down considerably in recent months. While the rate of input cost inflation held steady in March, February's rise has been the weakest for two-and-a-half years. 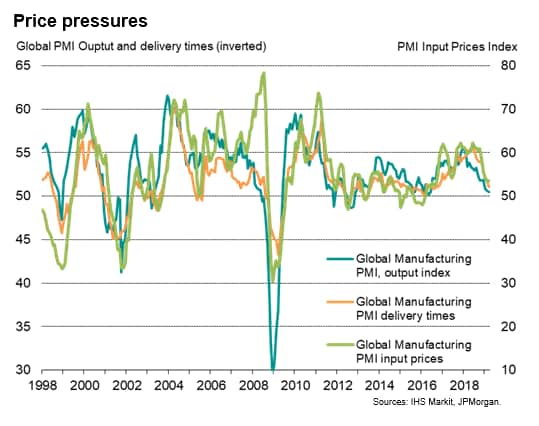 Average selling price inflation ticked slightly higher, in part due to the feed-though of rising wage pressures in some countries and greater prices charged by Chinese manufacturers, but remained well below rates seen this time last year.