January's PMI survey showed UK manufacturing on course to act as a drag on the economy in the first quarter. Softer demand conditions, falling headcounts and growing gloom about the year ahead were widely blamed on intensifying Brexit uncertainty. Worries about Brexit-related supply disruptions meanwhile led to record stock building. 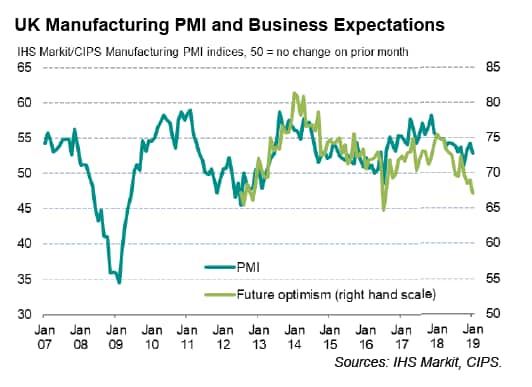 The headline IHS Markit/CIPS Manufacturing PMI dropped from a six-month high of 54.2 in December to 52.8 in January. With the exception of last October, the latest reading was the lowest since July 2016.

Output barely rose in January, with the survey registering the slowest increase in factory production for two-and-a-half years. When compared with official manufacturing data, the January PMI output index is commensurate with production falling at a quarterly rate of 0.2%, suggesting the goods-producing sector will act as a drag on the wider economy in the first quarter after a largely stagnant fourth quarter (see feature at the end of this article for further information). 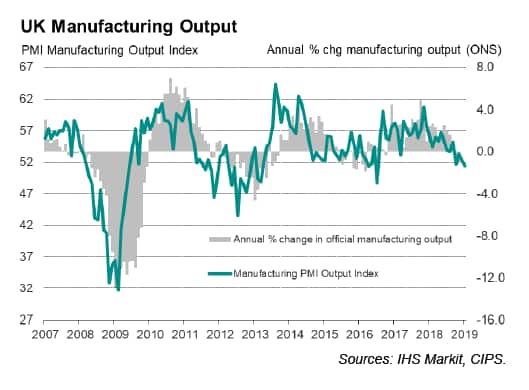 Production growth deteriorated due to relatively subdued demand conditions. A marked boost to order books at the end of last year, linked in part to pre-Brexit ordering by customers, faded in January, resulting in one of the slowest increases in new business seen over the past two-and-a-half years.

The waning of order book growth was in part linked to new export orders broadly stagnating, contrasting with the upturn seen in December.

Backlogs of orders also fell, down for a thirteenth straight month and dropping at the sharpest rate since last July, in a sign that producers will rein-in capacity in coming months unless order inflows revive.

A drop in employment - only the second such decline seen over the past two-and-a-half years - meanwhile indicates that factories are paring-back their headcounts in response to the deterioration in backorders. Gloomier prospects have also deterred firms from hiring. With the exception of the drop in optimism seen after the EU referendum in July 2016, business expectations about the year ahead were the lowest since November 2012, a time when the eurozone was in crisis and the global economy was stagnating.

Optimism fell mainly in response to increased concerns regarding Brexit as well as worries about slower growth both in the home market and abroad, especially in Europe.

Brexit worries also manifested themselves in a survey record increase stocks of inputs and raw materials, as companies sought to safeguard against potential supply disruptions following the UK's scheduled departure from the EU after 29th March. Stock piling was most evident in the food & drink, clothing, chemical & plastics and electrical & electronics sectors. 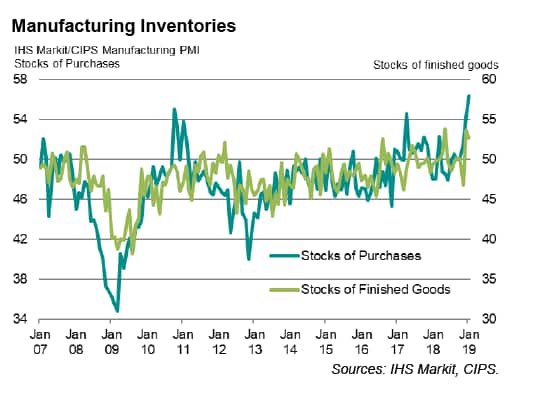 Such stock-building, both of raw materials and finished items, was far more widespread among larger companies than small firms. However, only the largest companies saw new orders rise during the month. Small firms reported the steepest fall in new orders for two-and-a-half years, led by a steepening rate of decline of export orders 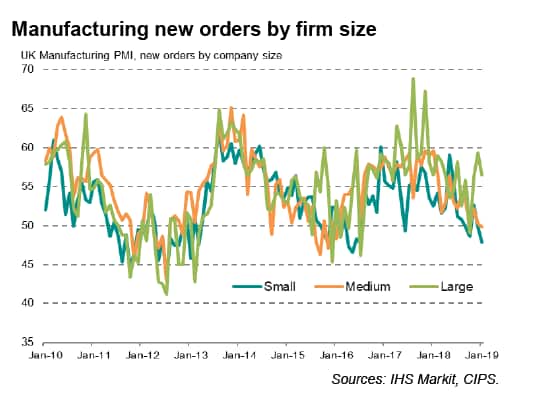 Looking at types of good produced, manufacturers of consumer goods reported a stronger rise in new work, which pushed production higher, in turn often linked to Brexit stock-piling. In contrast, producers of both investment goods (such as plant and machinery) and intermediate goods (inputs supplied to other manufacturers) reported falling levels of new orders.

Perhaps most worrying is the drop in new orders for investment goods, with January seeing the third such decline in the past four months, as this deterioration hints at reduced investment spending. 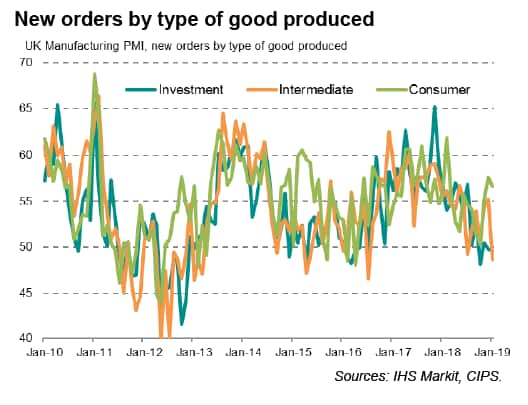 Manufacturing downturns and the PMI

An historical comparison of the survey's output index with official manufacturing data from the Office for National Statistics indicates that the January survey is indicative of the official gauge of output falling into contraction, dropping by 0.2% when measured on a three-month-on-three-month basis [*]. 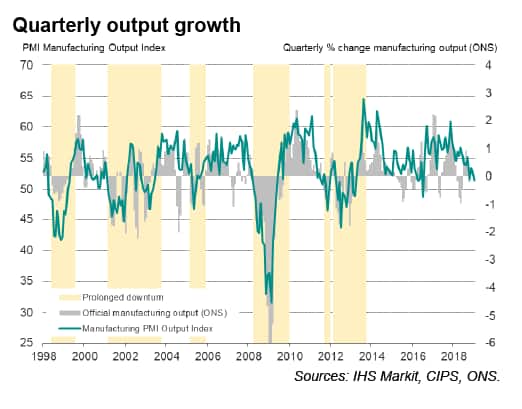 An advantage of the PMI is that the survey provides an advance guide to underlying trends in official data. This helps to identify occasions when the official gauge has been distorted by factors such as a major production change in a concentrated number of companies (such as autos).

For example, investors have seen the official measure of UK manufacturing output fall into decline on a quarterly basis some 16 separate times over the past 20 years. However, on only five occasions (1998-1999, 2001-2003, 2005, 2008-2009, 2011-2013) have protracted downturns worthy of policymaker and investor concern occurred, meaning investors were sent ten 'false signals'. All other occasions proved to be brief downturns that were soon reversed. Using the PMI survey data to analyse these periods of decline, sustained downturns have in fact only ever been recorded when the PMI's Output Index has fallen below 50.0 for more than one month. All other occasions have proven to be brief contractions in official data. At 51.4, the January output index remained above 50.0, but has clearly moved towards levels commensurate with a potentially significant downturn.