Global manufacturing continued to show signs of recovery at the start of 2020, according to PMI survey data, notching up its best performance for nine months. Although the overall expansion was again only marginal, encouragement comes from a marked rise in the number of countries reporting improved PMIs, which has reached one of the highest seen over the past decade.

The brighter trend in manufacturing was led by further signs of the global trade downturn easing and was accompanied by a firming of price pressures.

Business confidence in the outlook meanwhile also improved to the most optimistic for nearly one-and-a-half years, suggesting growth could pick up as we move into 2020, barring any renewed set-backs such as disruptions due to the Wuhan coronavirus or escalating trade tensions.

The JPMorgan Global Manufacturing PMI, compiled by IHS Markit from its surveys in 31 markets (now including Kazakhstan), rose from 50.1 in December to 50.4 in January, running above the 50.0 no-change mark for a third month and contrasting with sub-50 readings in the prior six months. The latest PMI was the highest since last April.

Signs of tentative improvements in the manufacturing economy at the start of 2020 come after a year in which the PMI indicated the goods-producing sector's worst performance for seven years.

The overall picture, although brightening, nevertheless remains worryingly subdued. While output rose at the second-fastest rate seen for over a year, the rate of increase was only modest, and factory employment continued to fall marginally in January as cost-conscious firms sought to boost productivity. 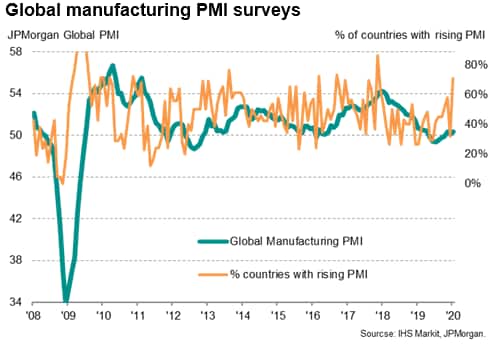 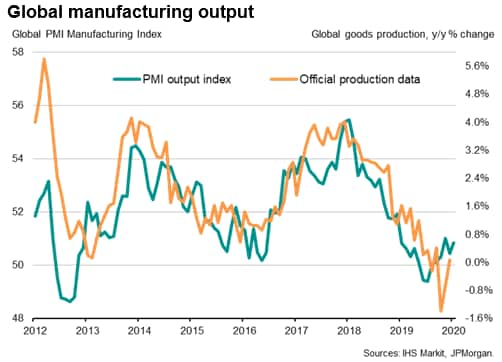 Backlogs of work also continued to decline, hinting at excess capacity, due to only a very modest improvement in new order inflows. The latter nevertheless showed the strongest gain since December 2018, helped in part by the easing trade downturn.

New export orders fell only marginally in January to show the smallest monthly drop for a year. Companies reported that trade had been boosted in part due to an alleviation of trade war tensions. Our index of trade and tariff worries, based on analysis of anecdotal evidence provided by worldwide PMI respondents, shows concerns moderated during January to one of the lowest degrees since early-2018, having appeared to have peaked last June.

It was the alleviating trade concerns that likewise helped push business expectations for output in the year ahead to their highest for 17 months in January. January also saw a reduction in concerns over recession fears, which fell to the lowest since last May.

Cost pressures have meanwhile increased alongside the tentative manufacturing improvement. Average input prices rose globally at the fastest rate since last June, thanks in part to suppliers enjoying stronger demand. New orders for intermediate goods (products sold to other manufacturers) rose globally in January for the first time in over a year. 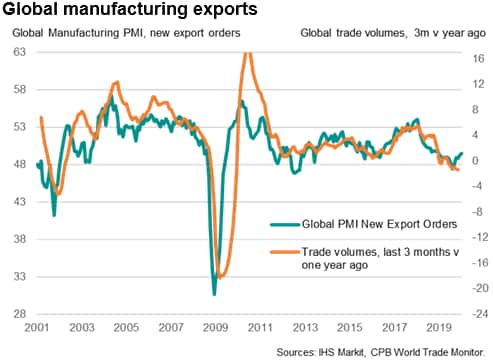 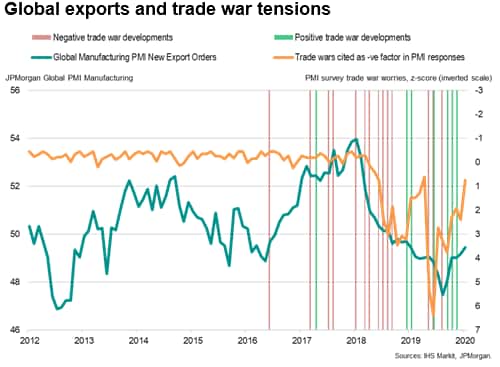 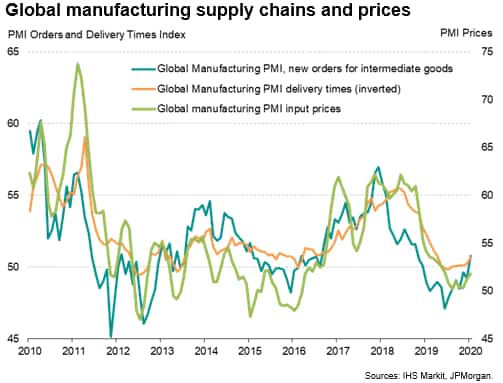 Nearly half of all countries surveyed reported PMIs above the 50.0 no change level in January, but more importantly some 71% saw their PMIs rise compared with December's readings, up from a low of 27% at the beginning of last year.

Looking in more detail at country trends, emerging markets as a whole outperformed the developed world for the twelfth successive month, contrasting with the trend seen in prior years, though the developed world recorded the smallest drop in activity since last April.

The emerging markets were led by India, which pushed Greece from the top spot in the overall PMI rankings in January, the latter having led the manufacturing growth table throughout the prior six months.

Some ten of the 15 markets reporting expansions in January were so-called emerging markets, and notably included China, Vietnam, the Philippines and Brazil.

Note that Asia excluding Japan and China has seen especially encouraging growth in recent months, the PMI reaching a 19-month high in January.

Looking at the world's largest developed economies, the United States recorded the strongest PMI, with signs of rising demand from US customers also helping keep Canada in expansion territory.

The UK's manufacturing sector meanwhile stabilised, bringing an end to eight months of continual decline, while the eurozone's factories reported the smallest drop in activity since last April.

Japan also remained in decline, registering the seventh-steepest contraction. However, the fastest-deteriorating manufacturing sector was once again found in the Czech Republic, followed by Germany, Kazakhstan, Poland and Russia, highlighting an ongoing clustering of production weakness in northern, central and eastern Europe. 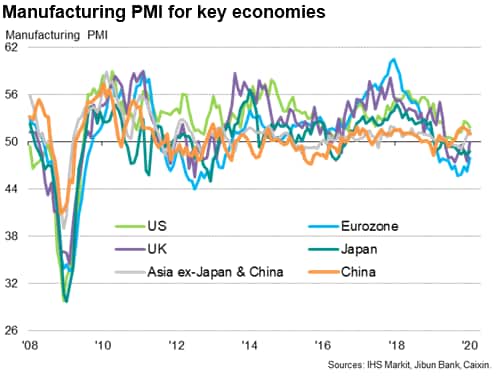 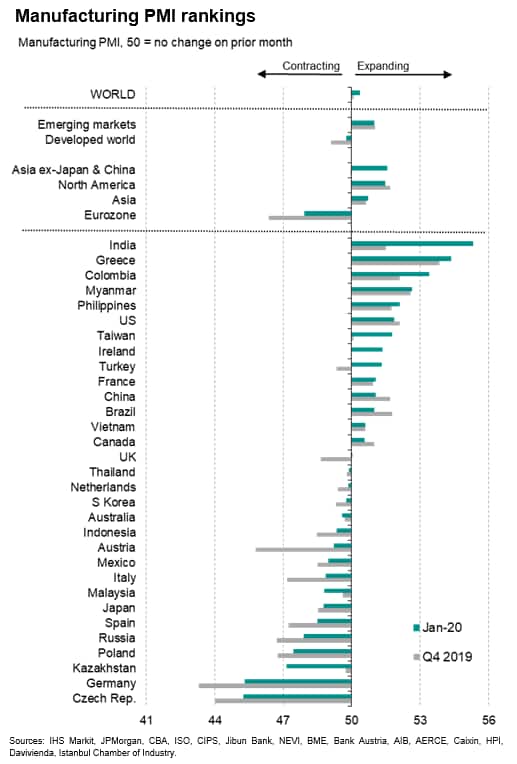 Risks to the upturn

The easing in the rate of loss of exports, as well as a rise in future expectations, tallies with improved news-flow regarding the US-China trade spat, and notably the signing of the phase-one trade deal. However, this suggests that any flare-up in tensions, and in particular an escalation of tensions between the US and Europe, could cause a relapse. Similarly, the vast bulk of the January PMI data were collected before the nCoV outbreak, and any disruptions to business from the Wuhan virus also poses a threat to the nascent manufacturing recovery evident in January. 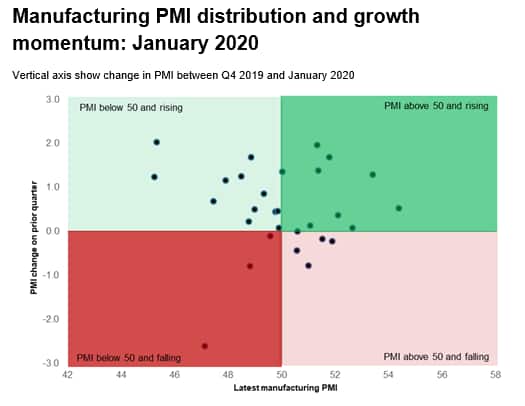 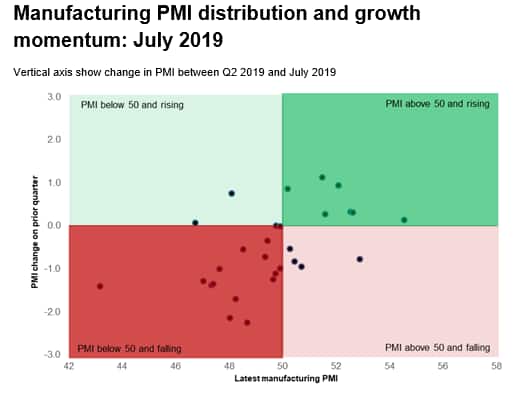 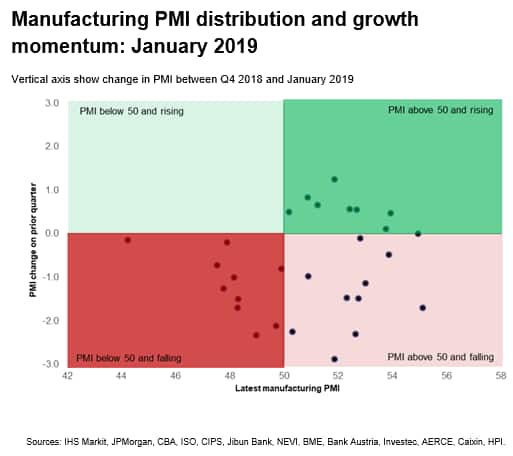