The Philippines manufacturing PMI indicated that the rebound in operating conditions seen at the start of the year extended into February. The continued resumption of factory operations brought another rise in production, putting the Filipino economy on course for a solid first quarter expansion and a positive year ahead. In fact, the prospect of a vaccine rollout supported an increase in business confidence among manufacturers to the highest since the pandemic hit.

The headline IHS Markit Philippines Manufacturing PMI™ posted 52.5 in February, matching the reading seen in January and indicative of another improvement in the overall health of the sector. This extended the current period of growth to two months, with the pace of expansion the joint-fastest since December 2018.

Survey data suggested that production rose again in February, with more firms re-opening their factories or expanding capacity. The output index readings indicate that official manufacturing production may soon start to move closer to stabilisation when compared to a year ago, following a severe contraction at the onset of the coronavirus disease 2019 (COVID-19) pandemic.

An improved overall demand picture contributed to the latest uptick in output, with growing domestic demand leading the expansion. Exports on the other hand remained subdued during the month, as restrictions in international markets weighed on foreign sales. The decline in export orders was the fastest since last July.

With overall workloads showing further signs of improvement, firms eased off on job cuts. In fact, the PMI's employment index hit a one-year high and signalled a near-stabilisation of staffing levels. 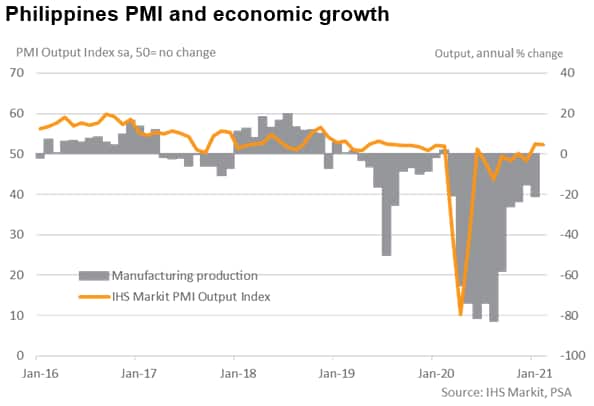 One area of concern was a tighter squeeze on profit margins, as inflationary pressures continued to build in February. The rate of input cost inflation was the strongest since October 2018, with firms continuing to blame greater costs on rising freight costs and prices amid global disruption to supply chains (suppliers' delivery times in the Philippines continued to lengthen markedly). Higher global commodity prices were also cited.

A sharp increase in cost burdens pushed Filipino manufacturers to raise their selling prices again in February. However, the rate of charge inflation was far softer than that for input prices, suggesting that firms absorbed a large proportion of higher expenses during the month. Manufacturers will be hoping that recent improvements in customer demand are sustained, enabling them to relieve some pressure on margins. 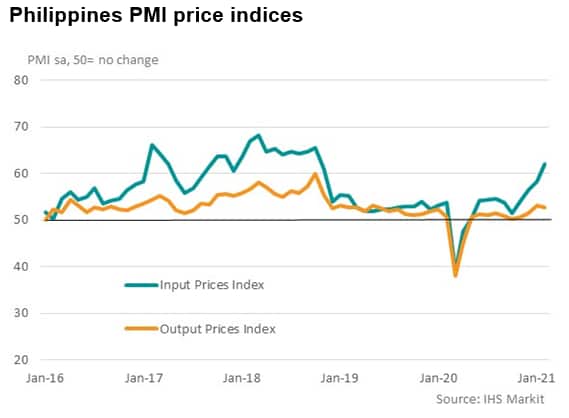 More encouragingly, business optimism regarding output levels in the year ahead reached the strongest since last February. The brighter outlook often reflected the news of vaccination approvals and rollout plans. Firms also noted expectations of a return to normality and stronger demand from both domestic and international markets. 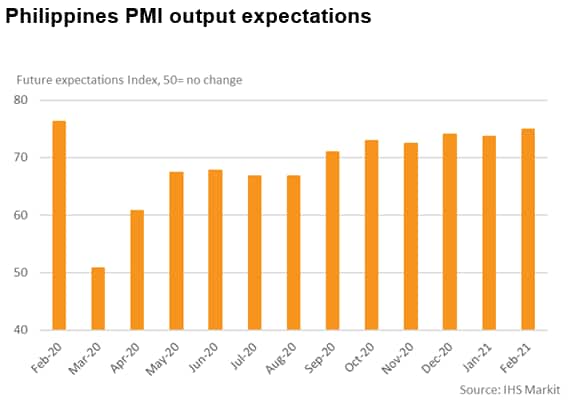 Return to growth expected in 2021

IHS Markit forecasts an increase in GDP of 7.4% in 2021, with the country among the fastest growing economies in Asia. Firms will now await the further easing of restrictions which will bring a much-awaited return of tourist activity. In the meantime, the mass vaccination programme will put the nation in good stead and help bring about a return to normality. The country aims to inoculate around 60% of its population to achieve herd immunity.

The next release of the Philippines Manufacturing PMI is on Monday 5th April.