Japan's economy expanded more than expected in the opening quarter of 2019, but growth looks set to weaken in the second quarter.

A 0.5% rise in GDP in the first quarter comes after mixed data late last year. Official data showed GDP falling sharply in the third quarter of 2018 but regained most of the lost ground in the fourth quarter. However, despite the fourth quarter improvement, by the end of last year the annual rate of GDP growth was still a lacklustre 0.2%. The sluggish expansion raised concerns that the economy was heading into 2019 on a soft footing ahead of a planned sales tax rise later in the year. The better than anticipated start to 2019 therefore goes some way to ease these concerns, but demand and underlying economic conditions still seem worrying weak. 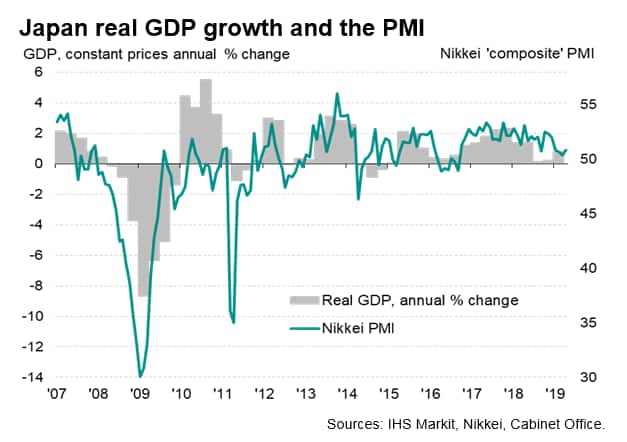 While the 0.5% real GDP rise during the first quarter of the year surpassed market expectations, the year-on-year growth rate was just 0.8%, and broadly in line with the Nikkei PMI survey signal (compiled by IHS Markit). Worryingly, the survey data indicate that underlying weakness likely extended into the second quarter. The composite PMI, which tracks output at both manufacturing and service sector companies, registered 50.8 in April, up from an average of 50.6 in the first quarter but considerably below the average of 52.1 seen over the course of 2018.

Like the official data, the PMI survey highlights the drag on the economy from manufacturing and trade. Alongside the latest GDP statistics, final industrial output data for March was released, revealing a 4.3% reduction compared to last year, the steepest in almost four years, corroborating the signal seen in the PMI survey from March. Japan's manufacturing sector woes have, to a large extent, reflected slowing global economic growth. Goods exports fell 2.4% in the first three months of the year compared to the final quarter of 2018, matching similar weakness in the PMI data, which had signalled successive monthly declines from January through to March. The survey's anecdotal evidence highlights how weak sales to China and other parts of Asia reflected rising global trade frictions.

Although latest PMI data up to April showed a slight easing in the strength of Japan's manufacturing downturn, signs of underlying weakness remained apparent, as export orders fell at a sharper rate. Trade frictions between the US and China have also escalated once more, which will likely act as a further dampener on trade flows in coming months.

Sub-sector data indicate that there is particular weakness within the investment goods category. According to PMI survey data, capital goods producers have faced especially tough demand conditions, with new orders falling sharply during April, declining at the quickest rate in over six years. These PMI numbers therefore suggest that the downturn in Japan's machinery orders - a key indicator of business capex - will have intensified in April.

The global PMI survey data also highlight the ongoing downturn of the autos sector, which accounts for an especially high proportion of manufacturing production in Japan. New orders for autos and related parts fell globally in April at the steepest rate since data were first available in 2009.

Support to the economy has come from the service sector. While the PMI has shown manufacturing output falling in the first four months of 2019, the service sector has continued to expand, with the average rate of growth exceeding that seen during 2018, albeit by only a small margin.

Of greater concern, however, were signs from the GDP data of weak domestic private consumption, which fell 0.1%, contributing in turn to a 4.6% drop in imports.

While the stronger than anticipated rise in GDP will embolden Prime Minister Shinzo Abe in hiking the country's sales tax in the autumn, any persistent weakness of consumption in the second quarter will be a concern, especially as one would expect consumers to be buying ahead of the tax rise.

Our flash Japan manufacturing PMI data will be updated on Thursday 23rd May, providing the first insights in production trends in May. Given recent escalations of trade frictions between the US and China, as well as underlying fragility within the global economy and a continued deterioration in global auto sector demand in recent months, Japanese manufacturers are struggling against many headwinds.