The Sri Lankan Government (PRDS) is conducting a limited tender for offshore block M2, Mannar Basin. Applications are due by 29 September 2017 for the block that contains:

A look at the Geology and Exploration History of the Basin

To date only four wells have been drilled in the Sri Lankan Mannar Basin, all of which were in the M2 block area. Of these, two were gas discoveries, one was dry and the Wallago well did not reach the lowest Albian target horizon. Most of the block is covered by two 3D seismic surveys and these surveys have been merged to cover 2,250 km2 in total. There is also 2D seismic data over the M2 block, a part of the 5,700 km of 2D seismic data in the basin as a whole.

Previous operator, Cairn Lanka Pvt. Limited, estimated that the two discoveries in M2 block contain mid-case recoverable resources of 839 Bcf gas and 5.88 MMb condensate. In the upside case they contain 1.8 Tcf plus 16.23 MMb. A number of other prospects and leads have been identified on the block including Albian beds not penetrated by the Wallago well.

The Mannar basin is a Late Jurassic - Early Cretaceous failed rift basin close to the triple junction of India, Africa and Antarctica. When palinspastically restored in the mid Jurassic, Sri Lanka is located near south-eastern Africa on trend of such giant discoveries as those in the Falklands, the Inhassoro, Tsimiroro and Bemolanga oil fields in Mozambique and Madagascar and the Properidade, Mamba, Zafarani, Golfinho, Coral, Mzia, Tangawizi, Orca and Agulha gas fields of Tanzania/Mozambique - all discovered between 2012-2013 with a P50 total of 186 Tcf in place. 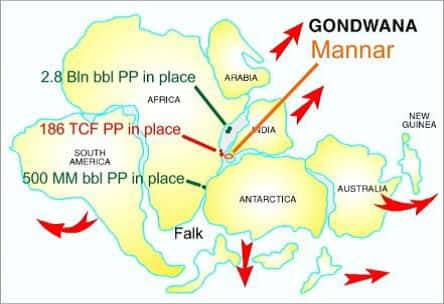 In Sri Lanka the Late Jurassic-Barremian Tabbowa lacustrine dark shales have source rock potential and the Albian shales with 6% TOC and 300mgHC/g HI values have been encountered in Sri Lankan wells outside the license block to the north. The Campanian-Maastrichtian sediments have up to 3% TOC. In the Barracuda well, Palaeocene TOC values reach 0.87-1.34% between 3245-3540m, and geothermal studies suggests that Cretaceous sediments at depths of up to 4700m have reached maturity. The presence of a working petroleum system is not in doubt from the gas discovered in the two Mannar block fields,and with the presence of gas chimneys and shallow gas hydrates. Fluid inclusion studies indicate the presence of liquid hydrocarbons even in water wet reservoirs.

The reservoirs are in good quality late Cretaceous deep water sands. There is one gas sand with 58 m net reservoir sand and 26% average porosity at Dorado. The Dorado discovery is a fold with four-way structural closure and is discernible by bright spots, an AVO anomaly and a well-defined gas-water contact at the 3037m depth. Recoverable Dorado Mid case reserves are estimated to be 314 Bcf and 1.24 MMb condensate. The Barracuda discovery has 3 intra-basaltic sand layers with gross thicknesses of 4.7, 14.35 and 4.42 m. Porosities vary from 10.1 -18.9 % in the gas bearing sands and up to 28% in the water bearing sand. Recoverable mid-case gas reserves (P50) are 525 Bcf and 4.64 MMb of condensate.

Sri Lanka is keen to encourage the use of domestic produced gas and is currently formulating a gas policy with the aim to create a gas market for power, industrial and domestic use and in tandem explore opportunities for LNG imports. The government also favors use of gas in the Downstream and Industrial Sectors and future gas monetization options may include taking advantage of a proposed power connection to India and fertilizer plants for the exploitation of phosphate deposits.

In the first instance, it is expected that a new operator will at least drill an appraisal well on the Dorado prospect, with the aim to move ahead to early production and delivery to an onshore power plant.

This is therefore an opportunity for a company or consortium to play a part in the development of the first offshore gas production from the basin and obtain a key position in the country's upstream sector.

With the authority of the PRDS, IHS Markit is offering an evaluation data package over the M2 block including:

Additionally other data is available including; field tapes, near and far angle stacks, and 2D seismic in the rest of the basin. Note these data are not provided within the M2 evaluation package. 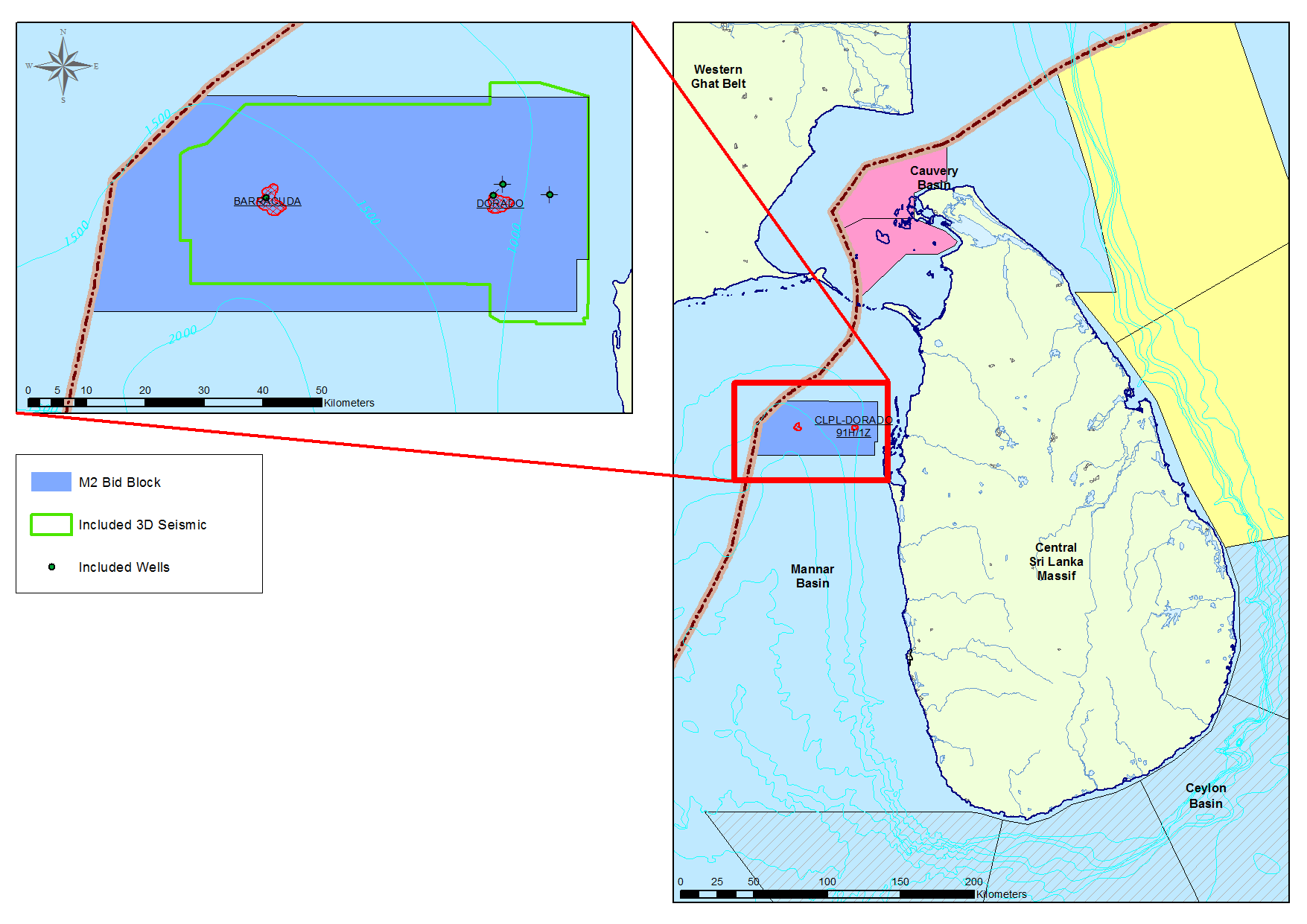 For more information on the IHS Markit data evaluation package for the M2 block please contact Adrian Heafford at adrian.heafford@ihsmarkit.com or Tim Hemsted at tim.hemsted@ihsmarkit.com.