Between 2018-2019, utilization rates at the Malaysia LNG (MLNG) complex have fallen to between 80-90%, a decrease from the high utilization rate, typically above 95%, which the liquefaction facility has historically maintained. This downward trend is expected to continue into 2020 as the COVID-19 pandemic and the attendant travel restrictions and physical distancing guidelines implemented to contain the spread of the virus led to a slowdown in LNG demand and decreased nominations.

While near term lack of demand is expected to drive down utilization rates, this should not obscure the tricky near-to-medium term gas supply situation the MLNG complex confronts.

In this report, we examine the various challenges that the MLNG liquefaction complex faces from a feedstock gas supply perspective as well as the potential impact of the Sarawak state government which is looking to take a greater role in the state's upstream oil and gas sector.

Gas feedstock availability challenges have come to the forefront in recent years as the existing gas supply sources mature. The Sabah-Sarawak Gas Pipeline (SSGP) was commissioned in January 2014, to provide breathing room for PETRONAS by delivering feedstock gas from the Kebabangan Cluster, offshore Sabah, to the MLNG complex located in Bintulu, Sarawak. However, since being brought online, the troubled 750 million standard cubic feet per day (mmscf/d) capacity gas pipeline has been non-operational or operating at a reduced capacity for much of the time. Explosions and gas leaks have repeatedly taken the pipeline offline, the latest of which being an explosion on a remote section of the pipeline reported in January 2020. With the expected feedstock supply from SSGP largely never materializing, greater pressure has been placed on existing supplies to fill the shortfall. 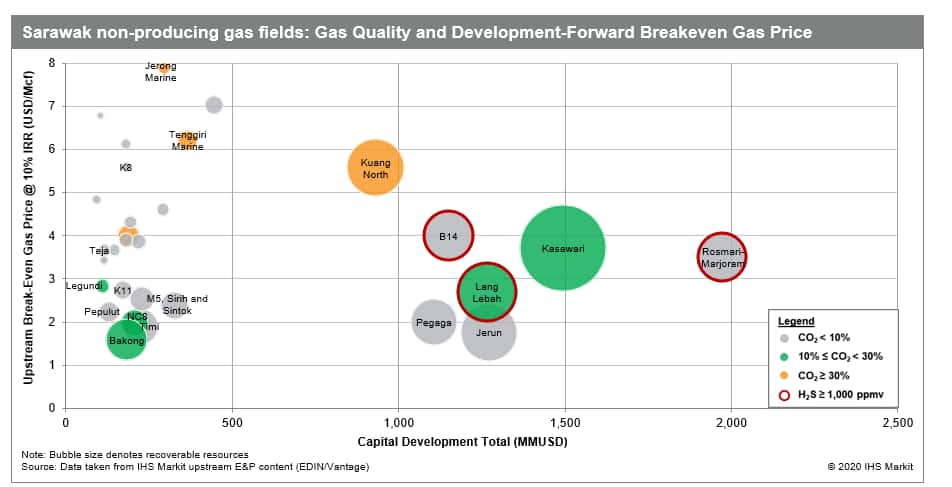 Closer to the MLNG liquefaction complex in Bintulu, gas fields that could serve as feedstock supply presents their own set of challenges. While significant gas discoveries continue to be made in Sarawak within the last decade with multi-Tcf discoveries including Kasawari (2011), B14 (2013), Rosmari-Marjoram (2014) and Lang Lebah (2019), commercialization of these discoveries has been complicated by the presence of acid gas contaminants.

Sizeable fields with sub-$2/mcf breakeven - Bakong, Pegaga, and Jerun have either been sanctioned or are in the process of being sanctioned. Bakong (~10% CO2) and Pegaga are planned to come onstream in 2020 and 2021, respectively. Similarly, Jerun is currently expected to be sanctioned by the end of 2020. Despite the Kasawari field containing higher levels of CO2 contaminants and a higher breakeven, the significant resource size of the Kasawari field makes it hard to ignore and a development decision was made by PETRONAS in Q3:2019. The future of MLNG feedstock lies in the development of a handful of large, acid gas fields or smaller, sweet gas fields which are likely to be insufficient on their own to provide backfill.

High CO2 gas development though is not a new challenge for PETRONAS in this region. Some acid gas fields such as B11 is blended with sweet gas to meet gas entry specification for MLNG Dua. Furthermore, the 3.6 million metric tonne per annum (mmtpa) MLNG Train 9 which began commercial operations in 2017 is equipped to handle feedstock gas of up to 20% CO2 and a few hundred parts per million (ppm) of H2S. The PETRONAS-operated NC3 gas field in SK-316 supplies feedstock gas to MLNG Train 9 and is reported to contain CO2 of between 17-20% and H2S of 70-150 ppm.

The challenge here is threefold:

Setting aside the challenges with feedstock availability, PETRONAS is also facing increasing above-ground pressures. The regional state government of Sarawak which plays host to the MLNG complex has in recent years taken a more assertive stance. In November 2018, the Sarawak state government imposed a 5% sales tax on petroleum products which came into effect on 1st January 2019. The state government launched a suit against PETRONAS in November 2019 following the NOC's refusal to comply and pay the state's sales tax.

In May 2020, PETRONAS and the Sarawak state government reached an initial agreement which sets out a potential pathway for resolution between the NOC and Sarawak (see Malaysia: 14 May 2020: PETRONAS-Sarawak sales tax agreement does not resolve broader upstream uncertainty). By August 2020, both sides have withdrawn their respective legal challenges and appeals in the Kuching High Court with PETRONAS largely agreeing to pay what is owed. It is worth noting here that the state government's unilateral imposition of a sales tax as well as ongoing negotiations with the federal government on issues surrounding territorial rights and regulatory authority over Sarawak's oil and gas resources is likely to cast a cloud of uncertainty for investors and could deter investments.

The introduction of the sales tax is likely to erode project economics of any future gas developments and the push by the state government for a petrochemical hub could threaten the availability of future feedstock gas supplies to the MLNG complex. These challenges should also not overshadow the real pressures that a more muscular Sarawak state government represents to PETRONAS if the situation impedes the ability of the NOC to restock its domestic portfolio of opportunities.

The resource potential of Sarawak which has been amply demonstrated by the past decade in which the state continues to rack up most of the discovered volumes in the country, contributing ~80% of discovered volumes over the past decade with 93% of these volumes comprised of gas resources. This highlights the centrality of Sarawak and the region's importance to the future of PETRONAS' portfolio and underscores the uphill challenges the NOC faces. Any further diminution of its role resulting in a loss of control or access to Sarawak resources would have important implications for the future of PETRONAS.

Where do we go from here?

There is a pressing need to upgrade and expand the existing acid gas removal facilities to process gas with higher levels of CO2 and H2S. Such investments could unlock over 10 Tcf of gas resources, that can serve as feedstock gas. Shell (Rosmari-Marjoram), PTTEP (Lang Lebah), PETRONAS (SK-316 fields, K5), SapuraOMV (B14) would benefit in the establishment of an acid gas production hub. However, considering the downturn in oil prices precipitated by the COVID-19 pandemic, there is a fear that the necessary investments are not made as companies seek to conserve cash and reprioritize capital expenditure.

Whether the state government will succeed in its petrochemical ambitions remains uncertain. What is clear though, is that as potential sources of low-cost gas dries up, the next slate of gas feedstock supply whether supplying a petrochemical hub or the MLNG complex are likely to be developed at higher upstream breakeven price points and consequently cost more for gas purchasers.

David Ooi is a principal research analyst at IHS Markit.