For suppliers, the next five years are critical.

The past 18 months have been a head-shaker for those of us observing the industry. A pandemic spreads, semiconductors vanish, and now a headlong charge by virtually every OEM and major Tier 1 into electric propulsion. Make that battery-electric propulsion. Sure, hybrids - a far more complex architecture, still with tailpipe emissions - will play a role in the short-to-mid-term. But anyone who is still doubting the industry's intent and long-term commitment to BEVs need look no further than President Biden's comment as he viewed the Ford F-150 Lightning BEV (top) in May: "The future is electric."

Given the level of BEV-focused investment by OEMs, suppliers and policymakers in the major markets of North America, Europe and Asia, it certainly points in that direction. The old saying, "When it comes to breakfast, the chicken is involved, but the pig is committed" comes to mind. Well, the auto industry is now the pig.

The last 25 years have seen the industry increasingly focus attention on BEVs, albeit measured. Efforts such as GM's EV-1, the Ford Focus EV and Nissan Leaf showed that OEMs understood the promise of BEVs, though with mitigated risk. Low-capacity production facilities (usually less than 50,000 units per year), utilizing shunt lines spurred off their primary ICE vehicle lines, showed that OEMs and their suppliers wanted to prioritize the hydrocarbon-fueled products that supported their bottom line. And while the industry and consumers treated the early BEVs as grand experiments, Toyota became synonymous with Prius and put electrified mobility on the map.

Then came Tesla, proving that there is a market to support sustained mass-production of BEVs. Traditional OEMs watched Elon Musk capture more and more luxury market share, prompting them to commit significant (more than 200,000 units per year) capacity to an EV future. Witness the transformation of GM's Detroit-Hamtramck, Spring Hill, CAMI and Ramos Arizpe plants, and Ford designating its Oakville facility for BEV output later this decade. OEMs have determined that in most cases, it is time to commit to the BEV future - altering operations, development, the supply base, dealers and in the end, trusting their loyal customers to a BEV future. While in some respects this risk is calculated - prodded by regulatory pressures in China and the European Union - the shift in North America still is bold.

The heads of many of my supplier contacts continue to spin. How broadly and deeply should we commit, they wonder? The investment decisions are tougher for companies whose product portfolios are geared toward combustion engines and traditional drivelines. This column has stressed the need for the supply base to pivot to accommodate the BEV future. IHS Markit's recent BEV production forecast (below) outlines a quadrupling of BEV output from 2019 to 2025, and a doubling from 2025 to 2030 as products move beyond the performance and luxury segments. The next five years are critical, particularly in building a robust supply chain and support infrastructure, and in convincing consumers that EVs are real. Because for the industry, they are. 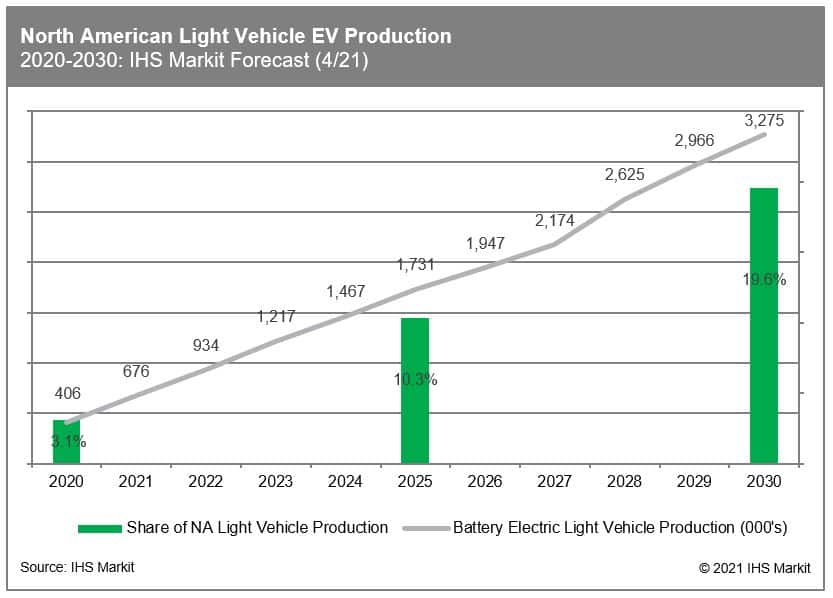 Our S&P Global Mobility expert shares the Chart of the Week on the Transition from the traditional transmission to… https://t.co/21iTBsYiNE

Please join our experts in-person in Paris to gather insight around critical subject matters of enablers for the co… https://t.co/sO58Q1ZsAk