Majority of UK firms step up preparations for Brexit, but big variation in planning seen across Europe

The latest IHS Markit Business Outlook survey asked manufacturers and services providers across Europe about their preparations or plans to address the impact of Brexit. In addition to UK private sector firms, a high proportion of companies in Ireland and Germany have either a written plan in place or started to assess the impact of Brexit on their operations. In France, Italy and Spain, the majority of firms considered Brexit preparations as not applicable to their business operations.

Comments from goods producers exposed widespread frustration at the difficulty of formulating plans given the uncertain outcome of Brexit negotiations. A broad range of views were cited in relation to the likelihood of 'no-deal' disruption to business operations, with some noting that price volatility is the main concern and a sizeable minority expressing hopes that any supply chain issues would only prove temporary. However, several firms cited plans to mitigate against transport delays by building safety stocks and bringing forward purchases where possible.

Manufacturers in Ireland (77%) and Germany (68%) also scored highly with regard to Brexit preparedness. Some Irish producers reported that European alternatives had been sourced to replace British suppliers, while others noted worries about the impact on the domestic economy. A number of Irish manufacturers showed concerns about the unknown costs of transportation, additional administrative burdens and tariffs, highlighting complications in planning for the unknown. In Germany, producers indicated the stockpiling of UK goods and efforts to search for new suppliers.

Brexit impact assessments were lowest among Italian goods producers (14%), followed by those in Greece (16%) and Poland (18%).

The highest proportion of manufacturers considering Brexit preparations as not applicable to their business operations was seen in Poland (66%), with some firms indicating that low trade volumes with the UK meant that detailed plans were not needed. The lowest figures for Brexit planning being 'not applicable' were registered in the UK manufacturing sector (4%), Ireland (5%) and Germany (28%).

Around 18% of UK services firms reported that they had written a formal plan for Brexit and a further 49% had started some investigation, meaning a total of two-thirds of UK service providers (67%) have evaluated the impact of Brexit on their business operations.

There were reports of negotiations with vendors to ensure a steady supply of materials and plans to mitigate regulatory obstacles. Some firms hope to benefit from expected sterling weakness, while others displayed concerns regarding skill shortages. A large number of panellists highlighted difficulties in making formal plans due to a lack of clarity regarding the UK-EU relationship.

The overall proportion for Brexit preparedness in the UK service sector (67%) was similar to that seen in Ireland (65%) and well in excess of the figures registered elsewhere in Europe, with Germany in third place at 37% of survey respondents. While some German service providers reported low trade with the UK, others noted difficulties in planning for the different potential Brexit scenarios.

A majority of service sector firms in each of the big-four euro area nations reported that preparing for Brexit was not applicable to their business operations. The highest 'not applicable' figures were recorded in France (77%) and Spain (74%). Among the latter, there were reports of no direct impacts expected despite concerns about unforeseeable indirect impacts. 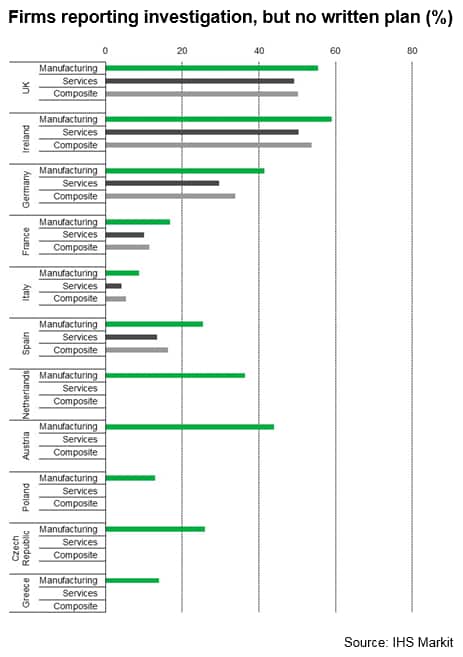 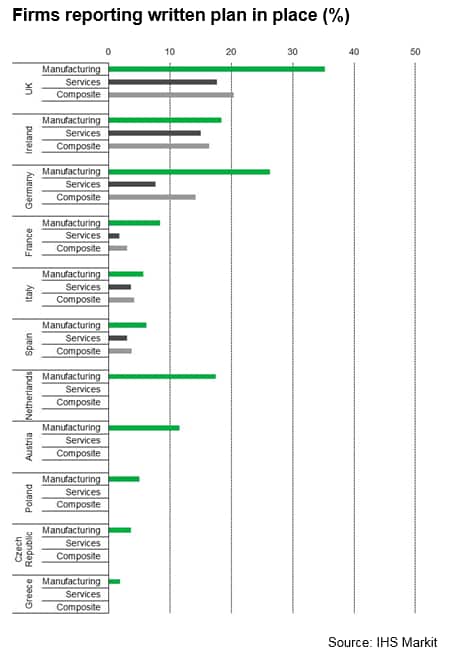 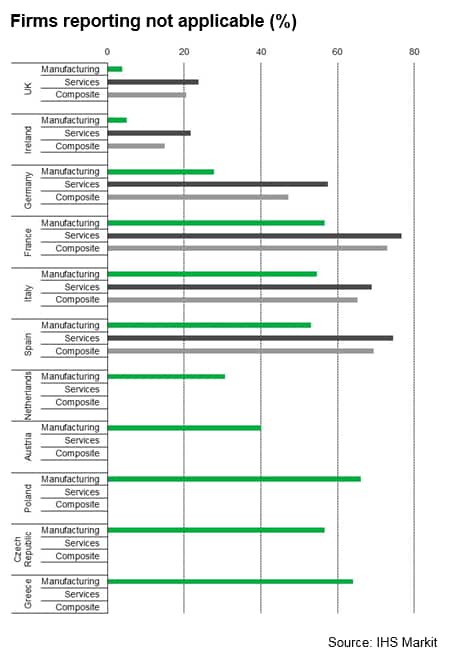