This is the largest single adjustment to the outlook in what has been a turbulent past nine months.

We estimate that 1.44 million units of production were lost in Q1 and a further 2.60 million units in Q2; currently Q3 losses are running at 3.1 million units and rising. The outlook for Q4 now reflects heightened risk as challenges to the supply chain - primarily semiconductors - remain entrenched. Recently Toyota communicated that it will be reducing build targets in October, following the announcement of a 40% cut to the September plan and this is symptomatic of the ongoing volatility in the sector and the continued lack of visibility beyond the very short term.

Why are we making such a sizeable downgrade?

In the first half of the year the primary cause of disruption was the shortage of front-end wafer fabrication for microcontrollers (MCU). This was the particular supply chain that was dented by the ice storm in Texas and the fire at the Renesas Naka 3 facility in Japan.

In addition to these events that compounded difficulties in an already constrained supply chain, we began to recognize an issue emerging in early June, which was affecting what are described as back-end processes (packaging and testing) within the semiconductor sector. The back-end issue is focused on operations located in Malaysia and is in direct response to the government's rolling program of lockdown measures. First scheduled to expire by the end of June, the measures were extended through the middle of August and the return to full operational capacity is now not expected until late October.

It is this back-end disruption that we see as most influential to what we now expect in the remainder of 2021. The two-and-a-half-month backlog that has built up since June will take time to clear and is anticipated to extend well into 2022. So, our interpretation of the situation in Malaysia, which is responsible for 13% of the global supply of semiconductors for the automotive industry, has become more pessimistic. In addition to the extended cycle of lockdowns, which in turn have reduced the possibility of any improvement in this calendar year, the back-end situation has also impacted a wider range of semiconductor applications beyond just MCUs.

If the first half of the year was defined by front end issues disrupting automotive MCUs, then the second half of the year and the coming months is increasingly defined by back-end issues affecting all semiconductor applications and not just automotive. This wider disruption beyond automotive is contributing to the reduced expectations for both 2021 and 2022, signalling that even without further external shocks, levels of capacity dedicated to automotive will remain below those required to meet ongoing demand and well below what would be required to allow stock levels to be rebuilt. Ongoing imbalances between supply and demand of semiconductors are now expected. 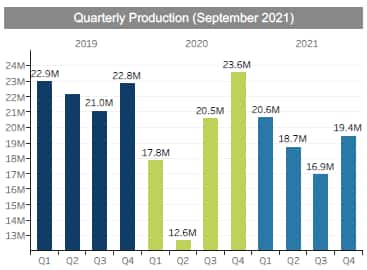