Europe's largest cities are underperforming relative to the rest of their nations amid the coronavirus disease 2019 (COVID-19) pandemic, according to IHS Markit's PMI data. This note looks at the specific performance of some of the main metropolitan areas in different countries across western Europe.

Cities usually perform better than rest of the country

To assess the impact that COVID-19 and the related "lockdown" measures have on cities, IHS Markit has delved into its PMI numbers for a special look into how business activity in these urban areas compares to broader country level data.

In this analysis we look at PMI™ Composite Output Index data across manufacturing and private sector services firms in a range of cities. To select these, we looked at the largest population centres and city economies in the western European countries for which we produce PMI data and were guided by the sample sizes we have available on our panels to ensure reliable results.

For the purposes of this note, we cover Madrid, Milan, London (produced in association with Natwest), Paris, Dublin (produced in association with Dublin City Council) and an amalgamation of five of Germany's largest cities (Berlin, Munich, Hamburg, Cologne and Frankfurt). The inclusion of multiple cities in Germany is due to a relatively even spread of companies in each big city across our German PMI panels. We hope to add more cities to the analysis in coming months.

These data show that cities have generally performed slightly better than the rest of the country with respect to output growth over the last five years, the only exceptions being Paris and Milan.

Paris was the main exception, with the trend for output just slightly below the rest of France on average (since January 2015). The average output index reading in Milan matched that for the rest of Italy.

With the possible exception of tourism-focused areas, which are likely to have seen an especially severe impact from the drop in travel associated with the pandemic, urban areas and large cities are expected to have been more heavily impacted by the pandemic than rural areas and smaller conurbations such as towns.

Many shoppers have been deterred by concerns over the possibility of infection in heavily populated areas, and lockdowns have meant high streets, restaurants and bars have at times been closed or opening times limited. Even when non-essential businesses have been opened, mandatory mask-wearing is likely to have deterred many shoppers. A surge in homeworking has also pushed footfall out of major cities.

Services firms particularly have suffered from the lack of commuters and imposition of social distancing measures.

Our PMI-based City Performance Scores* highlight this changing trend, with cities struggling to remain the powerhouses of national economies. Instead they have often become relative underperformers, acting as drags on the national economies since the start of the COVID-19 pandemic in March. Data also show that the underperformance became broad-based and much starker at the height of lockdown measures in the spring.

A score above 0 indicates relative overperformance of the city vs the rest of the country, whilst a reading below 0 signals underperformance. 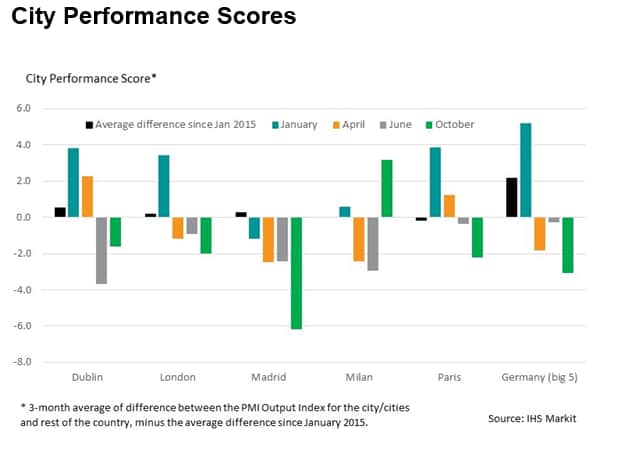 Germany's big five cities ranked second-to-bottom during the latest period, with a score of -3.1 points in October. This was a notable contrast to the sharp overperformance against the rest of Germany seen at the start of the year.

Elsewhere, Paris, London and Dublin also saw negative performance scores, signalling relative underperformance in those cities compared to the rest of France, the UK and Ireland respectively, albeit much less severe than that seen in Madrid.

Milan excels, thanks to manufacturing recovery

Milan was the only city monitored to outperform the rest of the country in October. The respective city performance score rose from +0.8 in September to +3.2 and signalled a notable outperformance of the city's output compared to that across the rest of Italy. This was likely a result of the ongoing recovery in the goods producing sector - with the Italian Manufacturing PMI posting a 31-month high in October - as Milan is home to a large number of Italy's manufacturers and is relatively less services oriented than other major cities.

With new measures being imposed across Europe to control the spread of the pandemic amid "second waves" of virus infections, lockdowns will continue to hit cities hard, and with some countries specifying stricter measures in large cities due to the increased risk of infection, it is unlikely that the overperformance of cities will return in the short term at least.

We intend to build on this analysis in the coming months, expanding out to include other parts of the world and other measures of performance such as employment and business expectations.

The PMI data will therefore help to track the impacts of COVID-19 on the world's major cities.