Business activity in China fell for a second successive month in March, but the rate of contraction eased markedly as fewer companies reported an initial hit from the Coronavirus Disease 2019 (COVID-19) outbreak and some companies returned to work after virus-related shutdowns. However, while manufacturing showed some signs of stabilising after February's steep decline, the service sector continued to contract at a rate only exceeded once in the survey's history by Februarys' record downturn. Consumer services providers in particular continued to report reduced demand as a result of social distancing measures.

The Caixin China Composite Output Index, compiled by IHS Markit and covering the Chinese mainland, rose from an all-time low of 27.5 in February to 46.7 in March. Despite the record rise in points terms, the index remained below the neutral level of 50.0 to signal a second successive monthly decline in output across the combined manufacturing and service sectors, with the rate of contraction running at the second-quickest recorded since early-2009. 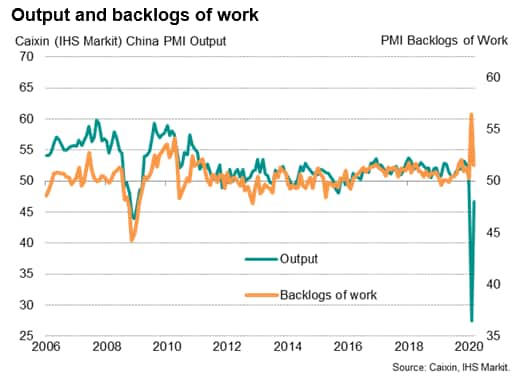 Some comfort can be drawn from the March survey showing a further marked rise in backlogs of work, as constraints such as supply chain delays and shortages of workers due to the COVID-19 outbreak continued to limit activity in the short-run, hinting that output could rise when these constraints ease. However, the concern is that global demand will weaken as increasingly draconian methods to limit the pandemic hit spending in coming months, causing a renewed dip in activity. 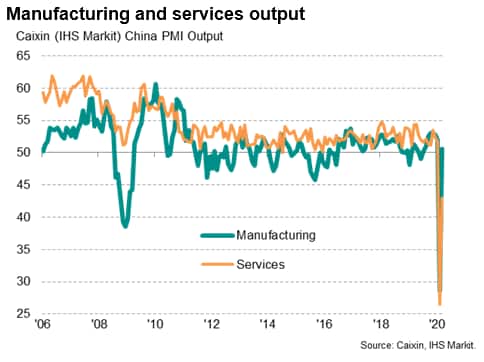 Worse affected in March was the service sector, where business activity continued to contract at a rate not previously seen in the services PMI survey's 15-year history with the exception of February's all-time record slump. The activity index rose from 26.5 in February to 43.0, but by remaining below the 50.0 no change level continued to indicate shrinking activity.

Levels of incoming new business in the service sector continued to fall, linked in part by a further slump in exports of services, in turn causing job shedding to accelerate to the quickest on record. Business expectations in the sector meanwhile rose only modestly from February's record low.

Looking in more detail within the services economy, all main sub-sectors saw rates of decline moderate compared to February, though hotels and restaurants remained mired in an especially steep downturn as footfall and bookings continued to decline amid widespread measures implemented to contain the spread of COVID-19. Job losses were also widespread, with only the financial services and the communications sector reporting net job gains, and even here the increases were only marginal.

More encouragingly, while February had seen the height of the COVID-19 outbreak so far in terms of factory closures, March saw the reopening of some production facilities push the survey's manufacturing output index back into marginal growth territory, up from 28.6 to 50.6 (its biggest one-month jump ever). However, the index merely points to a very mild month-on-month improvement in output from a low base after the record month-on-month slump in output in February. Worryingly, total new orders for factory goods continued to fall, with export orders down for a third successive month, albeit the rates of loss easing substantially in both cases.

Factory employment also fell for a third successive month, though likewise saw the rate of decline ease considerably from the record drop signalled in February.

Supplier delivery times meanwhile continued to lengthen at a rate only exceeded twice in the survey's 17-year history as constraints such as factory closures and reduced operating capacity continued to lead to widespread shortages of inputs, in turn often limiting output at manufacturers.

Looking ahead, manufacturers expectations of output growth in the year ahead slipped compared to February but remained higher than at the start of the year, reflecting widespread views that in many cases output cannot fall further simply because factories have been closed. The concern is, however, that by the time more production facilities come back online and up to full capacity, demand for many products will have fallen sharply amid slumping global economic growth.

Prices fall at fastest rate since 2015

Collapsing demand for many goods and services led to increased discounting, with average prices charged dropping for a second successive month in March, falling at the fastest rate since December 2015. Service providers reported the steepest drop in charges since 2009, with prices having now fallen for four consecutive months. In manufacturing, prices charged at the factory gate also fell, albeit the rate of decline merely the steepest since last August. 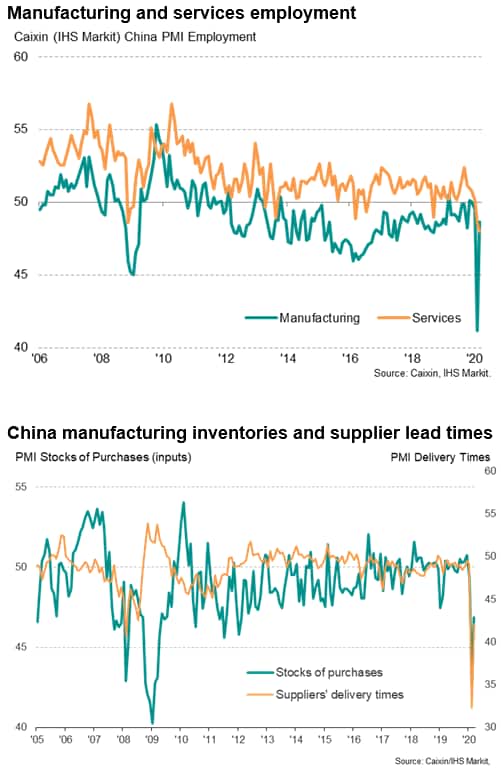