The transition toward a lower-carbon energy world has created new challenges for upstream oil and gas companies. In addition to existing pressures, including commodity price volatility and geopolitical risks, these companies also face growing pressure from shareholders, governments, and the general public to reposition their business models to compete in a new energy landscape. For now, the majority of the upstream industry remains focused on the core oil and gas business. A growing array of companies - spanning international oil companies (IOCs), national oil companies (NOCs), and the service sector - has begun to incorporate the low-carbon segment into their strategies while taking steps to build integrated business models across the energy value chain, diversify existing corporate portfolios, and reduce portfolio concentration risk.

Spending in this area remains small on a relative basis. IHS Markit forecasts the low-carbon segment to account for only 3% of overall corporate capex, in aggregate, for the largest IOCs and NOCs in 2020. Nevertheless, absolute low-carbon spending has surged and is expected to approach $14 billion for the overall industry this year, per IHS Markit estimates. We expect this trend to continue: for example, aggregate low-carbon spending among the Global Integrateds peer group is forecast to surpass $10 billion by 2025, up from $6 billion in 2018.

Some IOCs and NOCs are taking multiple approaches to incorporating low-carbon businesses into their portfolios. These range from internal research and development of low-carbon technologies (e.g., Eni's development of polymer-based solar panels at its Novara R&D facility) to strategic partnerships (e.g., a 50:50 joint venture between Bunge and BP to create a bioenergy company in Brazil) to external investments in standalone low-carbon companies (e.g., Suncor Energy's investment in Enerkem). Each approach has strengths and drawbacks. For example, internal development of low-carbon energy solutions requires a trade-off between extended time to build the technical and commercial capabilities in the organization and the benefits of strategic differentiation achieved by developing a proprietary solution.

Given the urgency for oil and gas companies to demonstrate their commitment to incorporating low-carbon initiatives into their portfolios, investments are an attractive option. Companies can quickly access business segments beyond traditional oil and gas operations, such as new parts of the energy value chain or geographies outside of oil- and gas-producing areas. Two classes of investment of particular interest are M&A and corporate venture investing. The M&A market allows companies to establish a new or growing presence within the low-carbon segment, via acquisitions, direct investments, and joint ventures. Corporate venturing is another option, in which E&P organizations incubate new technology at arm's length from the parent company. Through in-house venture capital groups, companies take small equity stakes, typically $1 to $5 million, in startup technology companies. Unlike traditional venture capital, which seeks to maximize its financial returns through investment exits, corporate venture capital groups also have strategic goals - such as developing technologies to enhance operations, commercializing internally developed intellectual property, or gaining market insights into emerging technology trends - in addition to financial ones. In many cases, the benefits of the strategic objectives outweigh the value of the financial goal.

Low-carbon M&A and venture capital activity by oil and gas companies reached record levels in 2019, pointing to the rising interest in this segment. In the M&A market, oil and gas companies were involved in 33 low-carbon transactions during the year (up from 20 in 2018); meanwhile, this group of companies participated in 45 low-carbon venture capital deals during the year (compared with 39 in 2018), per IHS Markit data (see Figure 1). The number of large-scale transactions has also increased, with eight M&A deals of at least $250 million occurring since 2017 (including Total's $510 million solar joint venture with Adani Group and Galp Energia's €450 million acquisition of a solar portfolio in Spain, both in 2020). 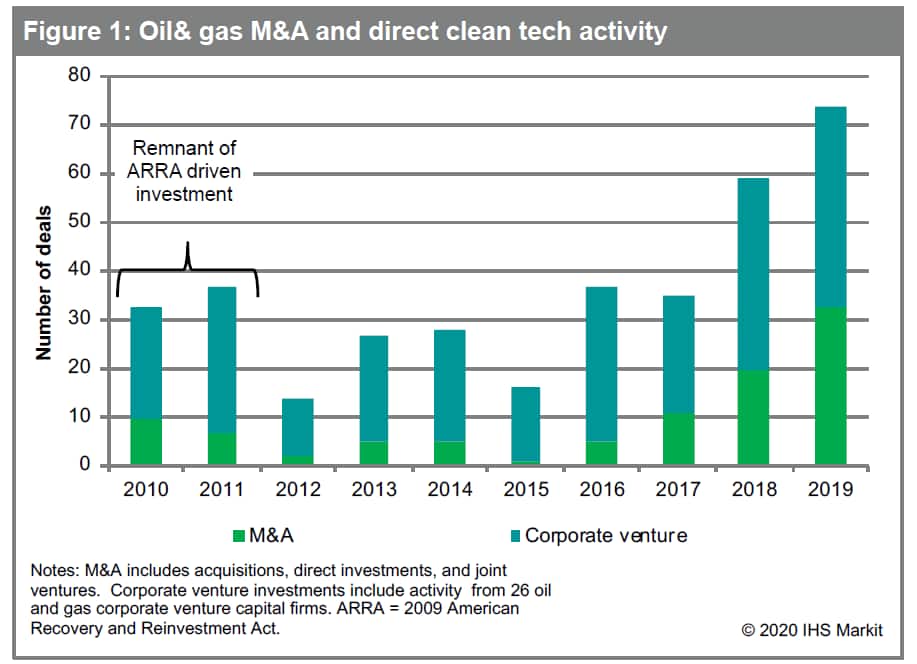 Despite this trend, individual responses by oil and gas companies vary significantly. While full-fledged transitions away from fossil fuels toward low-carbon energy have thus far been rare, several companies within this sector have earmarked a growing share of capex for low-carbon energy opportunities. Spending in this sector has been driven by the Europe-based Global Integrateds, for whom IHS Markit projects an 8% allocation of corporate capex in 2020 to the low-carbon segment.

Oil and gas companies have also pursued varying low-carbon investment strategies. For example, while some companies have opted to develop complementary low-carbon business lines from existing capabilities (e.g., Equinor with its Hywind floating offshore wind technology), others have pursued a more diversified approach, with an array of smaller-scale investments but across a broader range of sectors (see Figure 2). 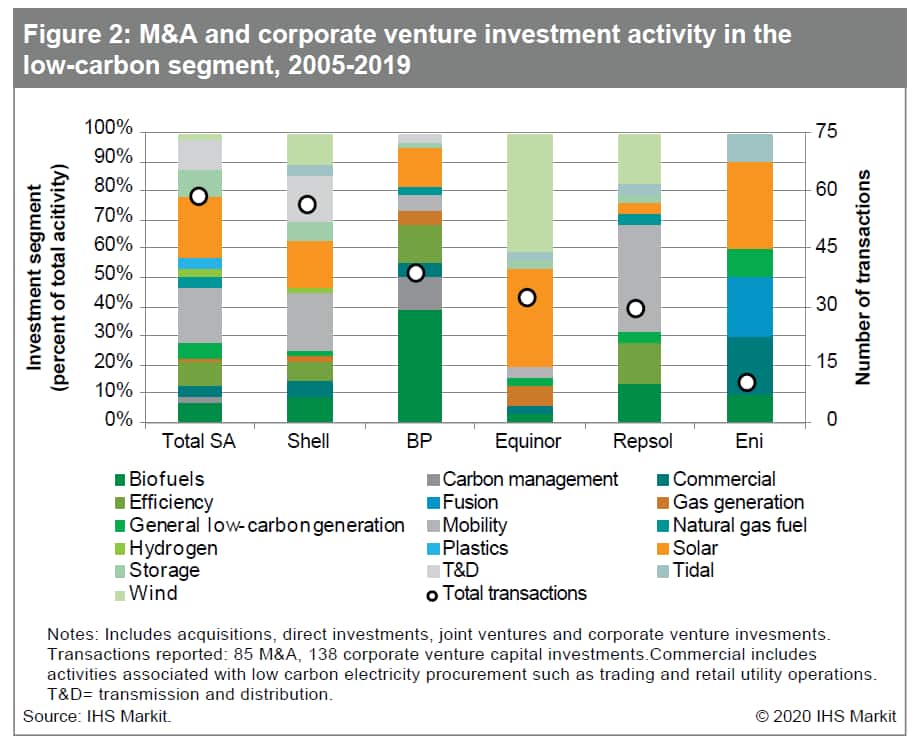 Each investment approach presents its own set of risks. Companies opting to maintain a focus on existing core oil and gas operations aim to benefit from the fact that the oil and gas sector is generally considered a mature business, with understood risks and returns. However, a traditional pure-play, upstream-oriented portfolio may not deliver on stakeholder expectations for returns alongside reduced carbon intensity, as would be consistent with a low-carbon world.

Companies that specialize in a small number of low-carbon segments may be able to achieve synergies with existing upstream operations and benefit from long-held expertise. The challenge for this strategy, however, is to make the right bets on low-carbon technologies. The rapidly transforming low-carbon sector creates new innovations which could quickly render other technologies obsolete, potentially resulting in some unproductive investments.

Companies pursuing a diversified strategy with smaller-scale investments benefit from broad-based exposure amid an uncertain outlook for winners and losers in the low-carbon segment. However, this approach may increase the cost and difficulty of achieving material scale in desired areas at a later time. Furthermore, this approach also generally involves venturing into unfamiliar, often early-stage technologies with uncertain prospects for profitability.

Nevertheless, the emergence of these diversified approaches offers companies a chance to differentiate themselves amid an increasingly challenging upstream landscape. It also provides investors with the opportunity to target companies whose views are in line with their own longer-term outlooks on the energy landscape.

Concerns about climate and sustainability have reached the top of the agenda for corporate leaders. What uncertainties face the energy transition in 2020?