An early production system (EPS) via the PetroSA operated gas processing facility in Block 9 is a unique opportunity for TotalEnergies to accelerate first production from its deepwater Luiperd discovery and for South Africa to support and further progress its energy transition plans. A start-up by 2027 is still feasible considering the minimal infrastructure upgrade required which is further supported by healthy economics and break-even prices estimated at less than 1.9 USD/bbl. The project can play a key role in the country's plan for energy transition and moving out of coal produced energy. In 2020, the main gas source for the country was the declining gas imports from Mozambique and the remaining domestic gas production. With the majority of the oil and gas fields being at a very mature stage and the domestic gas production all but suspended, LNG imports as well as the Luiperd and Brulpadda reserves will be critical for meeting the increased future energy demand as well as the country's energy transition plan.

TotalEnergies' recent exploration campaign in South Africa has yielded significant discoveries and has renewed interest in the region. Luiperd and Brulpadda fields are estimated to hold recoverable resources in excess of 5 Tscf of gas, some of which could be brought into production within the next few years. The Luiperd field can be developed through an early production system possibly via the existing F-A platform with a minimal number of wells, while no further details about the full field development have been announced. IHS Markit believes that a viable development approach would be to first focus on the low-risk volumes as a proof of concept in terms of field deliverability and associated volumes before additional processing capacity is added downstream. The suggested development plan involves the drilling of two production wells, the installation of a subsea production system tied into the North Tie-in Facility (NTIF), 38km to the northwest of the F-O (Ikhwezi) facility. 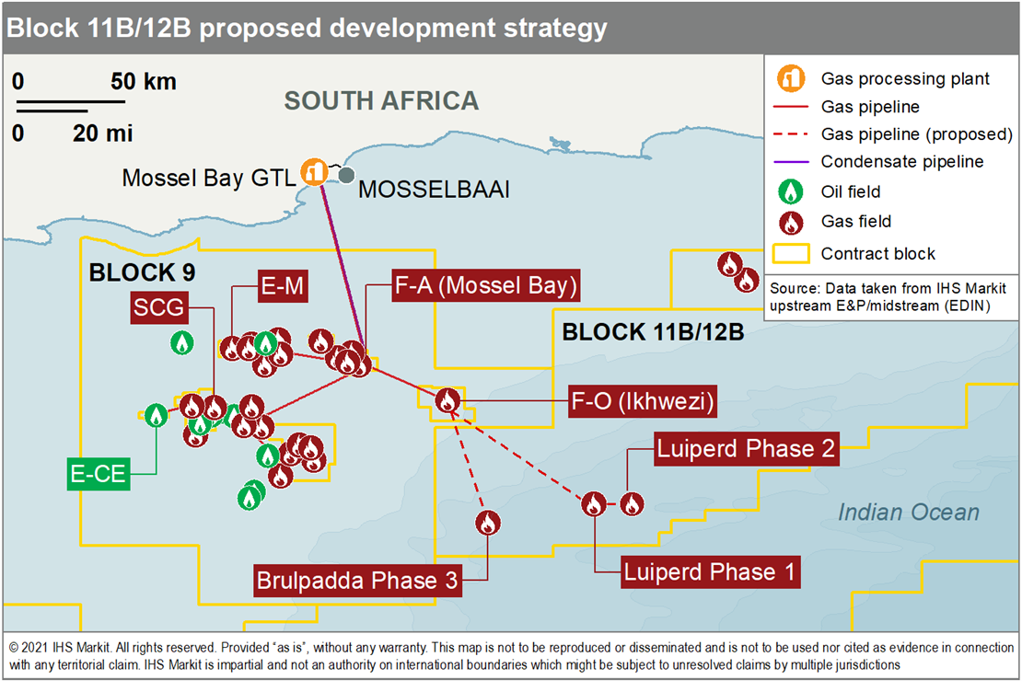 By utilizing the existing infrastructure, TotalEnergies and partners can minimize development costs and fast track production. The minimal additional infrastructure required is: the suggested well cluster, a 70 km pipeline to the F-O NTIF and an additional pipeline from the NTIF to the F-A Platform. This is expected to cost around 900 MM USD based on IHS Markit Que$tor.

The possible synergy between TotalEnergies and partners with PetroSA, holds the benefit that a downstream market for 200 MMscf/d has already been established in the GTL facility, and the F-A Platform facility design caters for sufficient capacity to process the forecasted gas and condensate from the Luiperd fields - hence deferring abandonment of the Block 9 infrastructure. The F-A Platform and GTL plant, which has been under care and maintenance since 2020, can be restarted even though the maximum available Block 9 production is below the current equipment minimum turndown.

Development concept for remainder of Luiperd and Brulpadda's recoverable resources

The Luiperd Phase 1 development leads to the monetization of the asset and facilitates further development, including exploration and appraisal drilling. Phase 1 also serves as proof of the potential from the Luiperd reservoir, after which the remaining 60% of recoverable resources from Luiperd can be utilized in a second phase, with additional wells being drilled to increase the plateau rate and an investment to increase in downstream processing up to 350 MMscf/d. The Luiperd Phase 2 development maintains the 350 MMscf/d production plateau until 2054, after which the Brulpadda field development could sustain the plateau for an additional 12 years until 2066. This is to be utilized in the GTL facility as well as additional gas power plants.

South Africa is going through an energy transition out of coal power dependence, where gas is seen as a transition fuel, but developing gas infrastructure and supply will play a key role in ensuring a smooth transition while meeting the future energy needs of the country. (For further information, please see earlier blog post: Prospects for gas in South Africa and Nigeria Power Sectors). With a successful Phase 1 development, local industry investment and policy changes could be fast-tracked to aid in the power transition. Phase 2 and 3 could also potentially be moved to an earlier date and an increased plateau, based on the availability of additional gas-to-power infrastructure.

Although the petroleum agreement for Block 11B/12B is not publicly available there is little uncertainty around the fiscal terms which are well understood from national legislation. The fiscal regime consists of royalty and corporate income tax. Royalty is due at a rate between 0.5% and 5% of gross production linked to earnings before interest and tax (EBIT) and corporate income tax is levied at a rate of 28% of gross revenue less deductions and depreciation. Further to this, IHS Markit has assumed 10% state participation in the project carried to commercial discovery without repayment, and a nominal fee of USD 50,000 per year for the training of personnel. 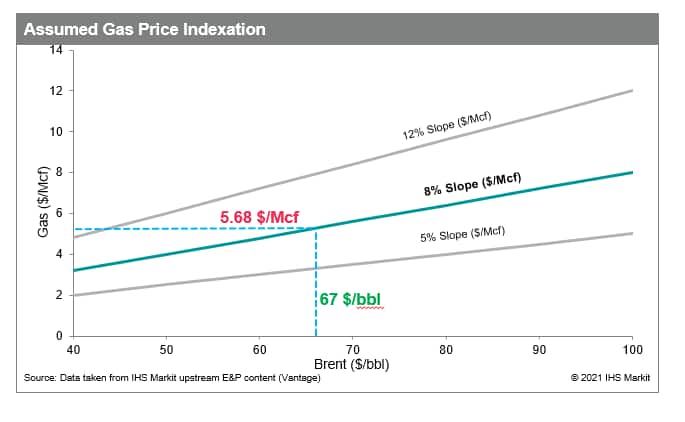 With offtake agreements yet to be negotiated there remains significant uncertainty around the product pricing. IHS Markit assumes that gas price agreements will be indexed to Brent directly or through refined products and so has chosen to link the gas price via a percentage slope to oil for an economic evaluation. An 8% slope has been used which gives a realized gas price of USD 5.68/Mcf in a USD 67/bbl oil scenario.

The economic evaluation metrics for the phase 1 Luiperd project describe an attractive investment opportunity with a healthy Net present value (NPV) of USDMM 2775, an eye-catching Internal Rate of Return(IRR) of 34%, and a payback period of six years. The economics of the recovery project benefits from a globally competitive fiscal regime with a government take of 31%; including an assumed 10% state back in takes place, the overall state take would be 38%. Breakeven analysis shows the project breaks even in a 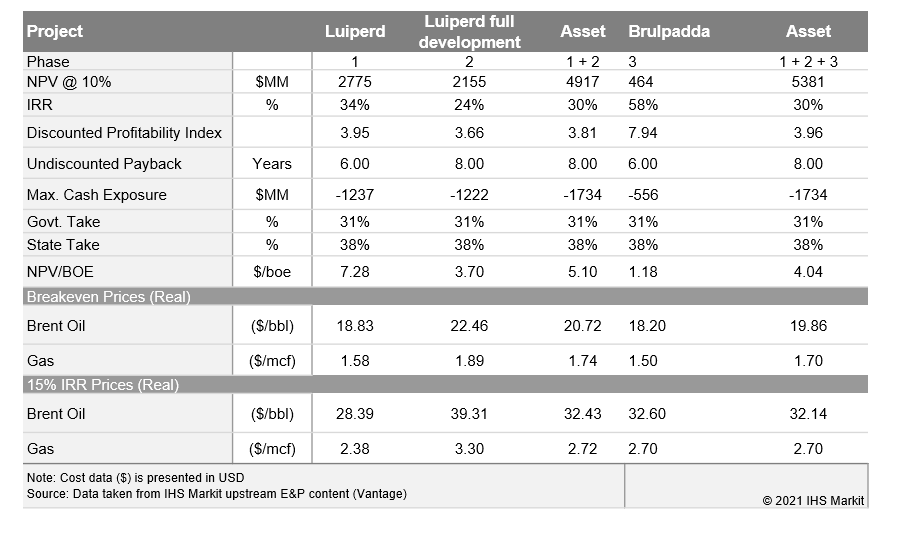 Sensitivity analysis focusing on Luiperd phase 1 shows the project is resilient to changes in project costs aided by a fiscal regime that collects the majority of economic rent through income-based taxation post cost. Price and production seem particularly important drivers of value which underlines the risk surrounding the key uncertainties present in this evaluation and which must be de-risked to progress this project toward a commercial investment decision.