The Luiperd discovery in October 2020 has led to a two-fold increase in South African gas reserves and is likely to be the second largest global discovery of 2020. To date, South African gas consumption has been predominantly limited to PetroSA's gasto-liquids (GTL) refinery and Sasol's chemical plants and today only accounts for 1% of the power generation mix. However, pervasive power outages and an aging coal fleet have created a need for new base-load power. The detection of the large gas volumes, so close to the recent Brulpadda discovery, has the potential to ease the country's security of supply concerns, but discovery is only the start of the gas monetization process. A challenging technical operating environment and an unclear domestic monetization route could delay the near-term development of these reserves and maintain the country's expected reliance on pipeline and likely LNG imports into the 2020's and beyond.

On 28 October 2020, Total announced that the Block 11B/12B Luiperd-1X exploratory well had been drilled to about 3,400 m and resulted in a significant Lower Cretaceous gas condensate discovery. Expected resource levels have yet to be made public, but IHS Markit expects reserves in excess of the 1 billion barrels of oil equivalent (Bboe), double the prospective reserve reference by Africa Energy prior to the official discovery. Luiperd is believed to dwarf the nearby recently discovered Brulpadda field, with potentially twice the gas reserves, but the liquids gas mix is thought to be similar. With discovered resources already estimated to be in excess of 1Bboe and numerous prospects and leads, the upside potential within the block is significant.

The development of the Luiperd and Brulpadda fields is currently in the early stages, with reserves and field development concepts yet to be formally announced. The most likely development concept would be a tieback of Brulpadda and Luiperd to a new shallow-water platform for collection and processing and onward supply, via a subsea system, to a new platform adjacent to the existing F-A platform. An additional two-phase pipeline to shore is also likely to be required. The largest capital cost element is expected to be the subsea facilities, with relatively large semi-submersibles required due to the challenging operating environment given the strong deep-water currents. Operating in such a difficult environment is likely to lead to significant cost uncertainties.

While the expected production rate from the joint development is currently uncertain, any gas monetization will need to be underpinned by robust offtake contracts in excess of 450 million cubic feet per day (MMcf/d). Assuming a two-field development and an assumed gas production rate of about 475 MMcf/d, the development is likely to incur costs in excess of USD 5 billion but given the large volumes a gas breakeven of around $3-$3.50 could be achieved, according to our in-house asset valuation modelling tool Vantage.

The discovery of gas condensate is in line with Total's general strategy of increasing natural gas production and promoting its use for both power and mobility. The project's carbon intensity and the domestic monetization of the gas will be factors in a final investment decision and development of the discovered reserves. A tightening of upstream capex is likely to mean that the joint field development will be competing against other global projects, so ensuring a clear route to monetization and minimizing any regulatory concerns are key.

Of significant concern is the country's petroleum framework, which is in the process of being revised. A draft Petroleum Resources Development Bill, which would separate the petroleum and mining regimes and update upstream investment terms and regulations, was published at the end of 2019 but is still awaiting further progress. A Gas Amendment Bill is also considered currently stalled. It is unclear whether either of these bills will be altered considering the Luiperd discovery and changes to the global oil and gas industry outlook. Additionally, the state's lack of experience developing deep water discoveries may also complicate speedy development. A driving force is likely to be the fact the expiration of the exploration contract for Block 11B/12B is in 2022, to be ideally converted into a production contract, which would require gas sales agreements to be in place.

The next stage in the joint field development is the undertaking of development studies as well as working with the South African authorities to secure gas monetization options. Supply is most likely to be sent to shore to the underutilized Mossel Bay GTL facility, serve industrial users in the Port Elizabeth area, displace diesel open-cycle gas turbines (OCGTs), and support power demand growth. Given the timeline for development of the gas discoveries there is an increasing risk that the GTL section of the Mossel Bay facility could be decommissioned and run solely for liquid fuel processing. In such a case, supply from Block 11B/12B would be focused mainly on supporting industrial and power demand.

Gas-to- power monetization challenges may be more political than technical

There are about 3.5 GW of OCGTs in South Africa, running on expensive diesel during shortages. According to South Africa's latest Integrated Resource Plan (IRP), another 3 GW of natural gas or diesel capacity, will be added by 2030, about half of the amount in the IHS Markit's outlook, which foresees a greater need to ease supply constraints. However, whether South Africa utilizes domestic gas resources to power this capacity, rather than LNG imports that carry fuel supply and foreign exchange risk, will depend on its ability to structure sufficient and transparent revenue streams in the short-term. 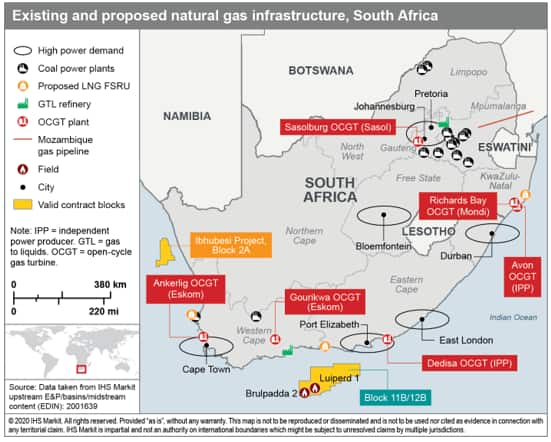 Given that South Africa is facing chronic load shedding and two-thirds of its coal fleet is over 30 years old, with some of the largest units, including Camden, Komati, Grootvlei, Hendrina, Kriel and Arnot expected to retire in the next decade, there is room for natural gas to enter the market at scale. However, if the government takes an adhoc approach to procurement, issuing small-scale requests for proposals (RFPs) for power supply, it may undercut the 450 MMcf/d necessary to monetize the discovery in the next decade. IHS Markit estimates approximately 2.5 GW of gas capacity, serving 11TWh of demand in 2025, an amount that can be supplied by 240 MMcf/d under 50% plant utilization. If the Ankerlig, Avon, Gourikwa, and Dedisa OCGT plants are converted to run on gas, then 571 MMcf/d may be absorbed, including Sasol's current gas demand. If development of domestic resources is not prioritized and the timeline for development is pushed beyond 2025, a build-out of LNG or gas import pipeline infrastructure is likely to meet power demand in the mid-2020s, further undercutting the value proposition for domestic gas.

If South Africa can ensure revenue streams on the supply side by guaranteeing offtake for power plants under a sufficient load factor, then domestic resources may supply an increasing portion over time. IHS Markit estimates 40 TWh of gas generation in 2030. The source of supply will depend on the resource size and the strategy the government employs today.

For detailed E&P activity coverage and context by country/territory, please refer to GEPS

For more information regarding our power service, please refer to Global Power and Renewables

Anna Shpitsberg is a director of global power and renewables at IHS Markit.
Rebekah Bostan is research manager for supply and demand fundamentals at IHS Markit.