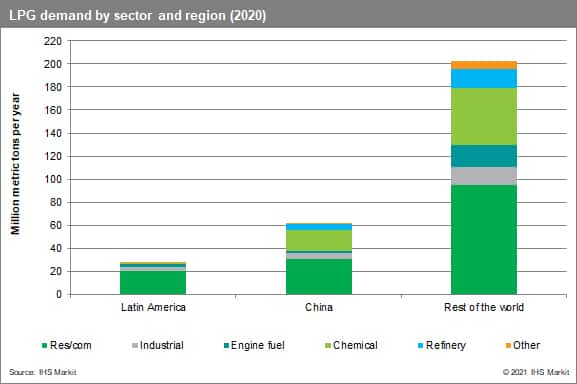 America is self-sufficient on butane, but short on propane. The residential and commercial sector consumes almost 75% of the region's total propane demand, and the LPG sold in the region is mostly a propane-heavy mix. As a result, the region as a whole is susceptible to global propane market movements. 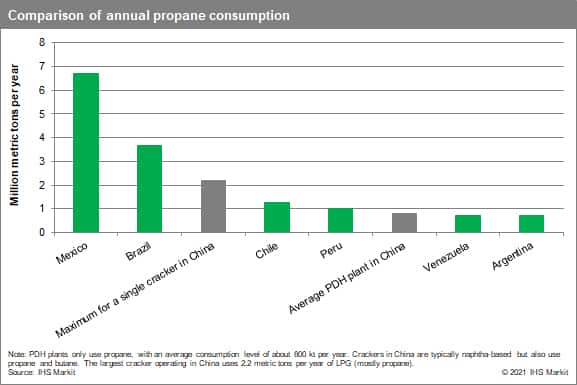 The important role of petrochemicals in the LPG market (and propane, more specifically) has a ripple effect on global supply and demand. As discussed above, petrochemical plants consume large amounts of LPG, so when new plants come online, or existing ones increase their use of LPG as a feedstock, global demand rises significantly (see Figure 3). In other words, chemical demand rises in "chunks" and can impact global pricing for LPG that could be destined for residential and commercial use. The impact of petrochemical consumption in China on global propane and butane markets—and its spectacular growth over the past five years—is critical to understanding Latin America's position as a price--taker (see Figure 4). With all Latin American countries using Mont Belvieu as a reference price, the correlation of local prices with the global trend is undeniable.

LPG prices are primarily tied to crude oil prices. With the recent upheaval in energy markets, global pricing has experienced volatility, reflecting a combination of factors, such as reduced supply in the United States and other parts of the world, weak demand that increased faster than supply growth (largely owing to cracker demand), and low inventories (see Figure 4). In the United States, more specifically, upstream producers have been exercising capital discipline to meet the demands of the investor community. This means that money that would otherwise be reinvested in the business (i.e., by drilling more wells and increasing production), is instead being used to provide investor returns. Consequently, demand has gone up, but supply has not, leading to higher oil prices (and therefore higher propane and butane prices). Other compounding factors have also been at play, specifically within the LPG market. Propane production has remained flat, while demand is growing for both domestic US consumption and international exports. China, for example, is expected to require an additional 4-5 million metric tons of propane, mostly sourced from the United States. This is slightly more than Brazil's propane consumption in 2020 (3.7 million metric tons). These supply and demand issues have led to lower inventory levels (well below the five-year average), putting further upward pressure on prices. Propane prices dropped from a seasonal high in first quarter 2021, but low inventory and strong exports will support higher prices through the summer. Price volatility and higher prices are expected through the rest of 2020, as markets will grapple with inventory build and exports to Asia. We expect Asian demand for propane to remain strong, particularly from China. Butane has experienced a similar rally. Normal butane prices dropped with a decrease in blending demand in the first quarter of 2021. However, blending demand is expected to increase early next year, supporting higher butane prices. 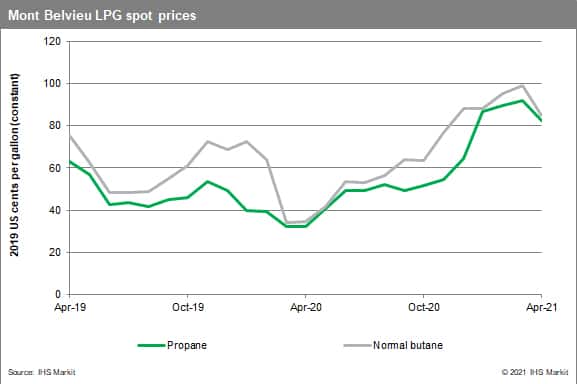 As a result, owing to the supply and demand dynamics highlighted above, during the past few months delivered prices for propane and butane have increased in every country in Latin America along with Mont Belvieu (see Figure 5). Because propane and butane are increasingly global commodities, pricing fluctuations resonate across the world, and Latin America is no exception. Compounding the issue, some Latin American countries have experienced an additional increase (or decrease) in prices owing to currency exchange rates. A stronger Chilean peso, for example, has helped reduce the impact of global propane price increases, increasing border prices by 50% relative to 149% increases in Mont Belvieu. On the other hand, countries like Brazil and Argentina, where the national currency has weakened against the US dollar, have seen a higher increase in LPG prices (72% and 77%, respectively). Prices are expected to decrease by less than 5% over the next year, but they will settle higher than the average for 2019 and 2020. Since most of the region—and most of the distributors—sources LPG from the United States, the effects of global pricing increases and decreases will similarly affect all countries and sectors. It certainly does not help that the average Latin American household's utility costs (LPG in this case) increase significantly in the middle of a pandemic and of broad economic challenges. A comparison of Mont Belvieu propane prices shows the close relationship with inflation rates in key Latin American markets. 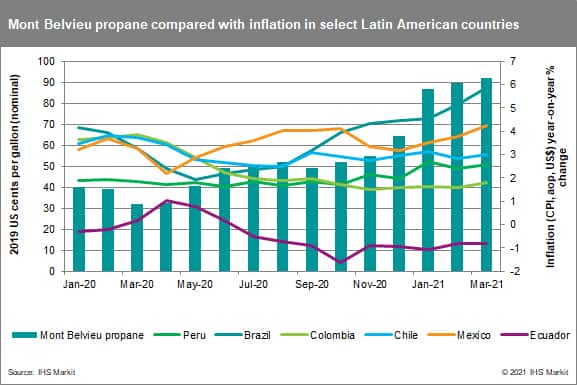 For a variety of reasons, public perception is often disconnected from the realities of the market. As LPG prices have increased in Latin America, so has the speculation around potential irregularities or structural problems with the LPG market. Chile, Brazil, and Colombia, for example, are all discussing potential investigations of collusion and regulatory actions that are meant to address these issues. In the case of Chile, the National Congress ordered an investigation on possible collusion between the three main LPG distributors that might have caused the increase in prices. In Brazil and Colombia, regulators are mulling price regulation or stabilization. In Mexico, a senator has proposed for the regulatory body to establish a maximum price for LPG.

The threat of intervention on the LPG market by political actors in the region is quite real. Regulatory involvement in the shape of a cap on retail prices, a stabilization fund, and tweaks to the price-setting formula are all possible. In a region in severe need of further infrastructure, any modification to the actual price of what is a world commodity will deter further investment in logistics and infrastructure and could lower the overall quality of service. Most importantly, price interventions have been tried before with less- than- stellar results. To name a few, Peru recently abandoned its stabilization fund owing to negative effects on public finances, Ecuador continues with a heavily subsidized price that costs the government billions of US dollars a year, and Argentina's LPG distributors demand a raise in the country's fixed price because the margins currently do not allow for appropriate distribution, let alone investment.

The pandemic escalated the visibility of LPG pricing for many governments in Latin America. The recent high prices are tempting politicians to intervene. It is important that market fundamentals remain and that any proposed regulations enacted align available supplies with demand sinks in Latin America economically, commercially, and operationally.