Amid the current market environment, a key question has emerged around how existing conditions could alter low-carbon spending plans of upstream oil and gas companies. On the one hand, the surge in commodity prices could entice these companies to reallocate capital away from the low-carbon segment toward oil and gas; meanwhile, rising energy security concerns could lead to greater support from policymakers, capital markets, and the general public for increased investment in traditional energies. Alternatively, companies could view current concerns around energy security as leading to an acceleration of the energy transition; furthermore, rising cash flow as a result of higher oil and gas price realizations and improved refining margins could also accelerate low-carbon spending.

This question is especially pertinent for the global and European integrated oil companies peer group, given elevated absolute and relative spending levels on the low-carbon segment. Thus far, current low-carbon spending plans for these companies remain intact, and IHS Markit is forecasting over $15 billion in aggregate organic low-carbon spending from this peer group in 2022, up from an estimated $11 billion in 2021. Spending at these levels in 2022 would equate to 12.6% of total projected organic investment from the peer group, compared with 10.9% in 2021 (and up from less than 7% in 2020). Over the longer term, IHS Markit is forecasting sustained growth in spending on new energies and decarbonization, with aggregate organic low-carbon investment from the peer group rising to $30 billion in 2025 and to $44 billion by 2030. 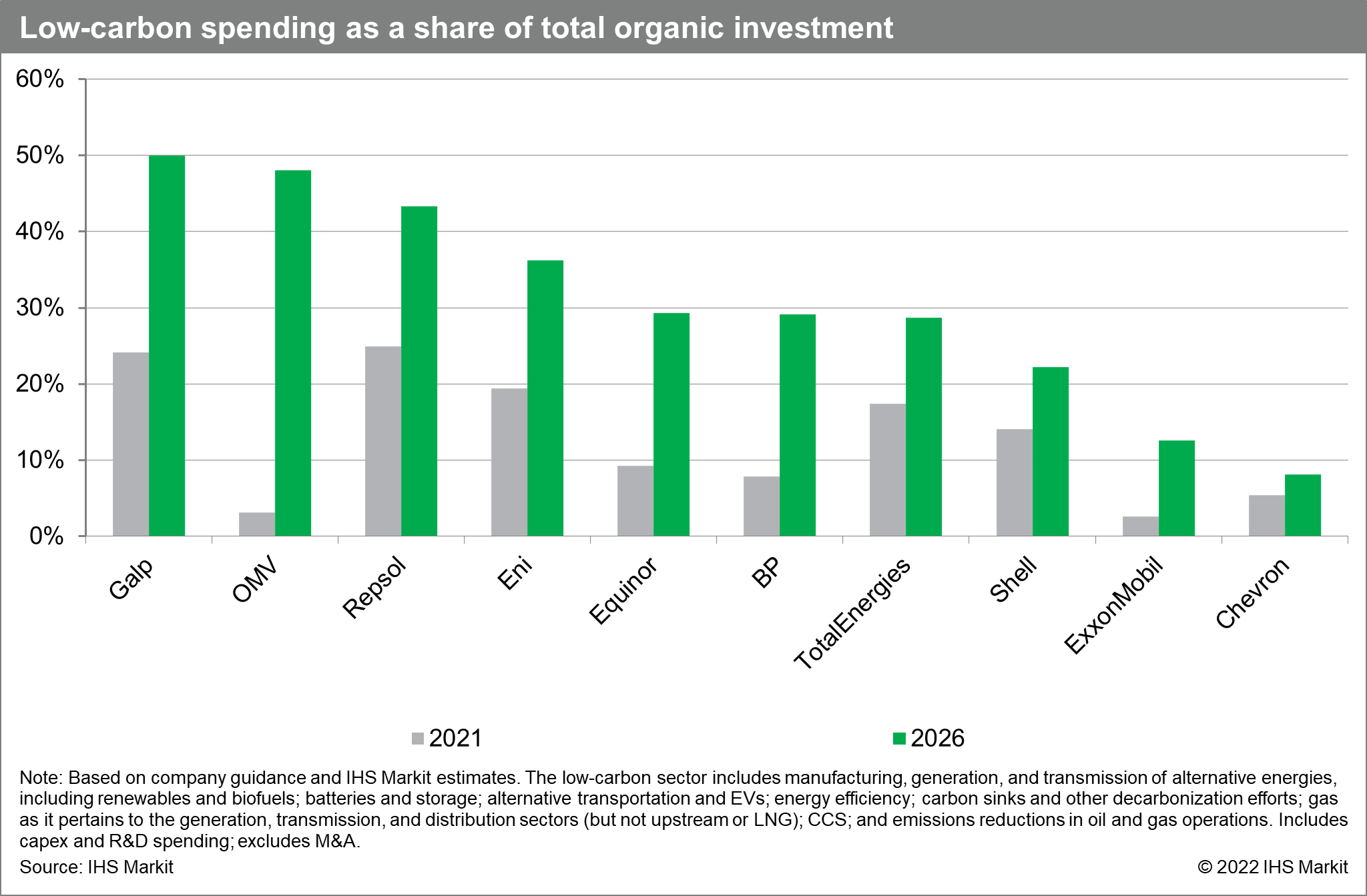 IHS Markit believes that these current low-carbon spending estimates for several members of the peer group are likely to be further revised upward—both on an absolute basis, as well as relative to total investment—in the coming years. However, with current low-carbon spending guidance already at elevated levels relative to total capex budgets, the scope for further upward revisions is more limited than what has been seen in recent years. In addition, an alternative scenario could involve a sustained period of high commodity prices incentivizing a reallocation of investment by these companies toward oil and (especially) gas—particularly if such a trend coincides with renewed support from capital markets toward investment in traditional energies. As a result, while the expected direction of travel for low-carbon spending from this group of companies remains upward, current market conditions have increased the uncertainty around this outlook.