On 3 January 2018, Mehmet Hakan Atilla, former deputy general manager for International Banking at Turkey's Halkbank, was found guilty in a US court of conspiring with others to evade US sanctions, use the US financial system to conduct barred transactions on behalf of the Iranian government and other Iranian entities, and defraud US financial institutions by concealing the true nature of these transactions. In light of the guilty verdict and the evidence presented at trial, it is nearly certain that the US Treasury and Department of Justice (DOJ) will fine Halkbank after Atilla is sentenced on 7 May (pushed back from 11 April, originally). Although Halkbank's role in alleged sanctions violations has been the most prominently discussed in the media, several large Turkish banks were mentioned during the course of testimony and could also be subject to fines in the future.

Given the myriad factors and the political considerations, it is nearly impossible to predict what size of penalty the US Treasury and DOJ will assess on Halkbank and/or any other Turkish banks that have been implicated in the alleged sanctions violation. The fines are highly likely to be significant based on the evidence presented at trial and the amount of funds positively identified as having violated US sanctions. However, this can still range from a size that hurts Halkbank temporarily, but ultimately does not force the bank into bankruptcy, up to a severe fine that could force the liquidation of the bank, alongside fines that also heavily penalize several other key Turkish banks.

A manageable fine would inflict limited negative ramifications on the Turkish banking system and economy as a whole. Banks would likely see a temporary increase in funding costs on international debt, delaying new bond issuances in lieu of drawing down liquid reserves held at the central bank and temporarily slowing credit growth. The economic contagion would be modest. The exchange rate would face a period of depreciation, but not one that is particularly more substantial than many of the modest runs we have witnessed since mid-2016. Ultimately, this slide would be arrested within a couple of weeks, potentially at a modest further cost to foreign exchange reserve levels. Net portfolio investment flows could turn outward, but such a switch would likely be a short blip, perhaps just a month or two. The slowing of inflation could be delayed, but a spike to price growth would not be expected. The impact on the real economy would be limited, with household consumption and fixed investment growth hardly slowing faster than already anticipated. 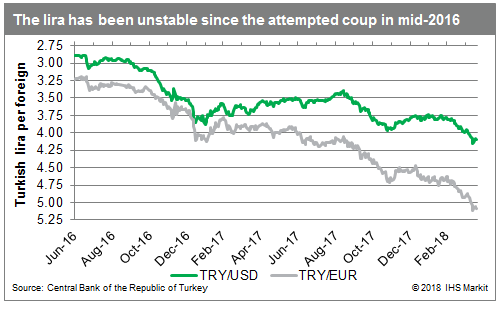 A more crippling penalty that extends beyond Halkbank would have a more substantial impact. A sharp, sustained rise in funding costs on banks' international debt or a significant outflow of foreign capital that reduces roll-over rates on existing debt well below 100% would significantly curtail credit extension as banks would be unable to replace foreign funding with domestic sources. 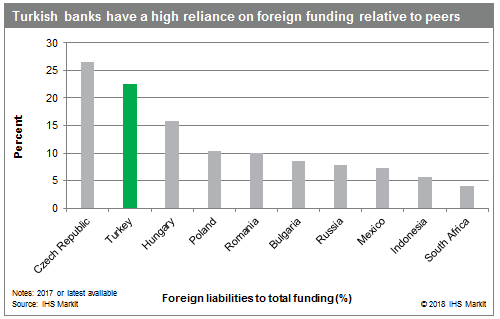 A financial system crisis would have a more significant impact on the economy in general. The evaporation of credit would bring household consumption and fixed capital formation growth downward significantly, subsequently bringing headline GDP growth down by about 1 percentage point compared with current projections. Depreciation of the lira would be more prolonged, the stabilization of which would deplete foreign currency reserves to dangerously low levels. The sharp weakening of the lira and concurrent drop in reserves would severely undermine the country's ability to meet external debt obligations. Net portfolio capital flows could be outward for several months, raising the likelihood of a current-account crisis. With markets unstable, inflation would spike. 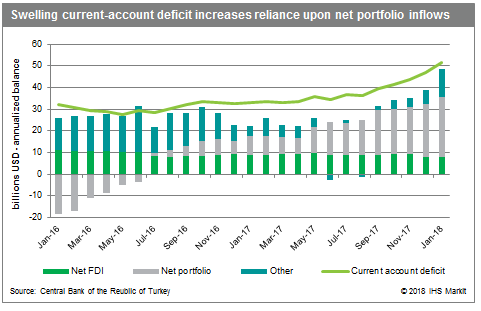 Despite these threats, the country's previous ability to avoid economic destabilization following the attempted coup and aggressive government crackdown afterwards reflects the resiliency of the Turkish economy. This resiliency could be further buoyed if Russia or Turkey's gulf ally, Qatar, offers financial and economic support, potentially as a way to counter the impact of US-originating sanctions. A heavy penalty would noticeably hurt the economy and stability, but it would not likely lead to a full-scale crisis or a drawn-out economic downturn.

The tide appears to be turning in commodity markets with more signs that the year-long rally has run its course. In… https://t.co/uSoJ5bkxOE