Since the Russian invasion of Ukraine there have been increasing questions about the ability of Canada, the world's fourth largest oil producer-and specifically the oil sands—to contribute more oil to the United States and the global market. Although the current crisis, including substantially higher oil prices, is incentivizing the Canadian sector to increase production in the short-term, increased pressure to strengthen returns and decarbonize the industry are weighting on longer-term growth. IHS Markit, now part of S&P Global, continues to expect growth, but our long-term forecast has been somewhat reduced as operators are expected to prioritize value over volume and advancing large scale decarbonization projects.

Expected growth is still substantial. Over the next decade (from 2021 to 2032), oil sands production is expected to increase by about a half a million b/d. In 2030 Canadian oil sands production would be over 3.5 mmb/d. Over four-fifths of anticipated production additions are expected over the next few years indicating a sharp deceleration in growth is on the horizon. More than four-fifths of the growth is expected to come from the ramp-up, optimization and completion of projects where some capital has already been invested. Nearly half of the growth alone is expected to come from just the ramp-up of existing operations. 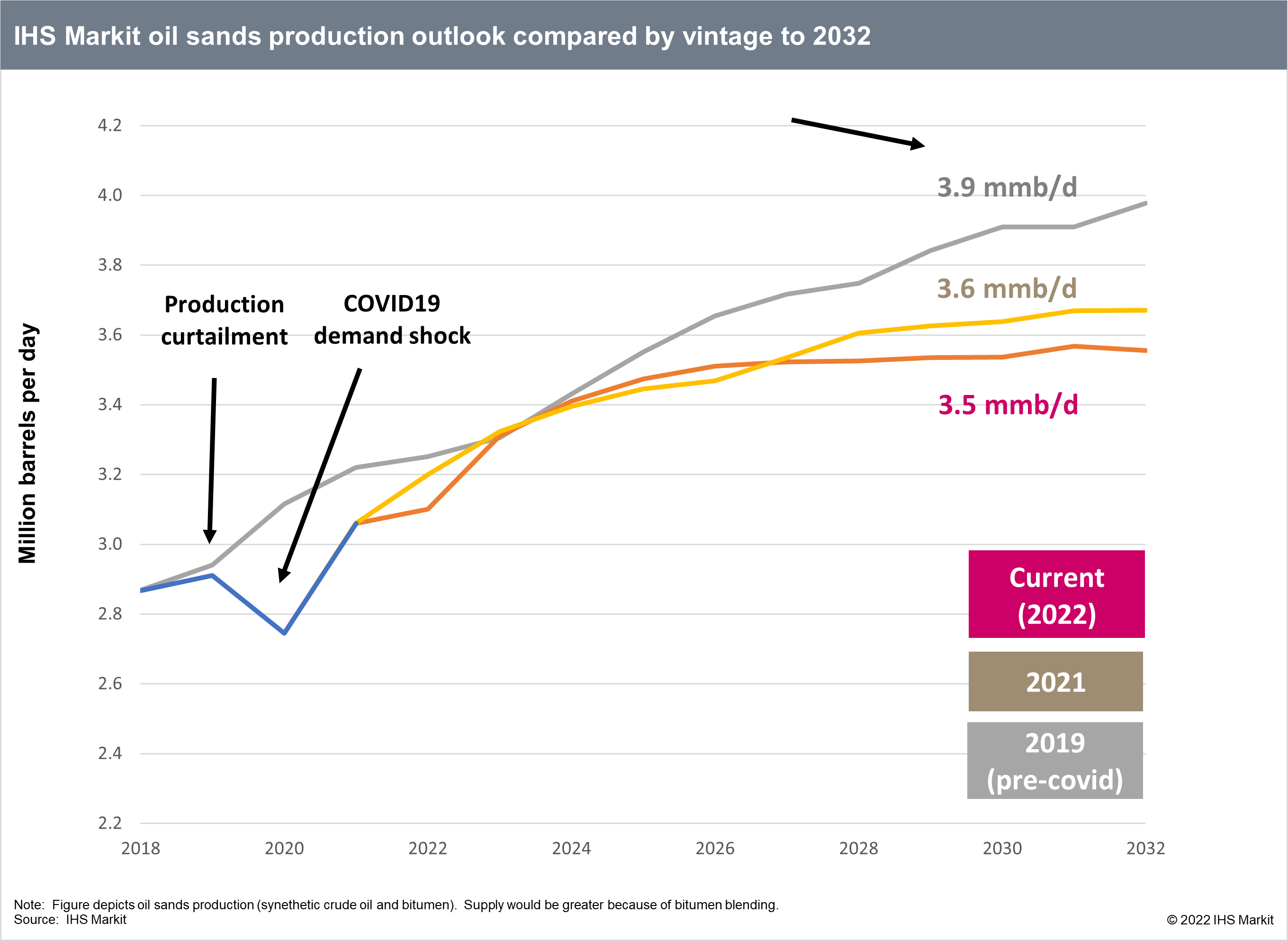 Market instabilities of the past—both regional and global—delayed and pushed-out the timing of future projects, reducing our prior growth expectations. More recently, investor priorities have shifted to toward greater returns of capital today (e.g. dividends and share buybacks), discounting the potential from future growth and contributing to our latest revisions. Compounding our current view are the ambitious GHG reductions expectations announced by the Government of Canada.

Compared to last year's release IHS Markit long-term expectation is 100,000 b/d lower by 2030. Nearly all the reduction in growth has come out of output associated with new projects that would have been expected online later in the outlook. Most of the growth in IHS Markit outlook comes from installed capacity as producers focus on the ramp-up and optimizing of existing assets.

From an investor's perspective the value proposition for the Canadian oil sands was never really about production growth. The value of the oil sands was always about the promise of long-term cashflow generation potential due to its long-life, low-decline production profile that came a relatively low maintenance cost. The key challenge associated with the oil sands was the large upfront out of pocket expenditure required over multiple years to bring online new operations. Today, investors' interest in future large-scale investments has fallen, but investments that have been made and projects that are now online are in a position to realize oil sands free cashflow potential. Last year, was the single most profitable year in the history of the oil sands with the core four operators generating, on average, over CDN $6 billion in pre-dividend organic free cashflow. This year, 2022, could set even higher records with the potential to generate on average over CDN $10 billion in organic free cash flow each (excluding base dividends; based on US$95/bbl WTI)—revenue that investors are seeking.
There is a possibility that our current production outlook may be too conservative. Sustained higher prices and heighted energy security considerations are creating new pressures to increase oil sands output in the near term. If current price levels are sustained, it is possible upstream operators may be able to satisfy shareholders with sufficient returns, advance larger scale decarbonization efforts, and at the same time invest into growing production. Any upward revisions to our outlook would most likely come from greater than anticipated optimization as opposed to larger scale projects. The potential for additional gains from optimization are significant. A 1% per annum improvement of a system of over 3 mmb/d could result in 250,000 b/d more output by 2030.

The story about the Canadian oil sands today is one that is looking to be increasingly less about growth, and more about returns, output optimization and maintenance, and accelerating technologies to lower emissions to put the industry in a position to compete on carbon.