Back in 2008 there were news stories that read, "The SUV is Dead." This proclamation was partially true as it marked a dramatic decline in fullsize SUV consumption, but the fact is the stylish, slightly smaller, more fuel efficient SUV segment not only survived but was the overall volume leader in 2010 and continues to dominate the light vehicle market based on February 2011 year-to-date personal registrations. On second thought, "dominate" may be an understatement as the the SUV segment share of 21% is 45% greater than both the basic economy segment (Corolla, Civic, Focus and competitors) and the upper middle segment (Camry, Accord, Altima and competitors), the respective number two and three volume leading segments. 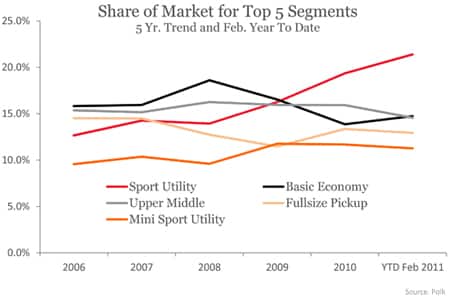 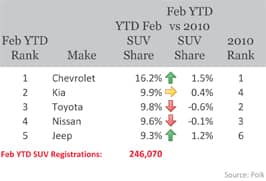 So who is the the reigning "King" of SUVs? That would be Chevrolet with a 16% segment share which is nearly double the segment share of its closest competitor. Two brands making waves in the segment are Kia and Jeep. Kia finished 2010 ranked fourth in the segment but gained an additional .4 percentage points in the first two months to move into the number two spot. Jeep has gained major lift from the redesigned Jeep Grand Cherokee also known as "2011 Truck of the Year." Rounding out the top five segment leaders at the three and four spots are Toyota and Nissan respectively with approximately a 9.8% segment share each.

What are the top models for the growing SUV segment? With Chevrolet being the "King" of the segment, it's fitting that the Chevrolet Equinox leads the way at the number one spot with a 10% segment share. Equinox was the segment leader in 2010 with 8.4% share but gained an additional 1.6 percentage points through February 2011 to retain the top spot. 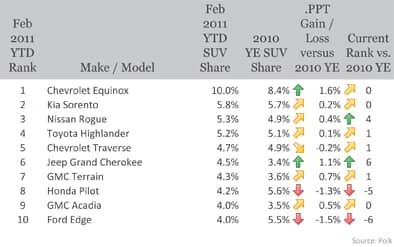 The Kia Sorrento gained an additional .2 PPT to remain the number two model. Two vehicles that made significant vertical moves in the segment top ten were the number three Nissan Rogue (up four spots from number seven)and the Jeep Grand Cherokee which vaulted up six spots to join the top ten at the number six spot.

Based on this information, I will close this blog by going on record as follows, "The SUV SEGMENT is not dead but very much alive and leading the entire light vehicle industry."

These are my findings supported by Polk data. I would love to hear your thoughts or comments on the SUV segment growth or the blog in general.

How will commitments to #carbonneutral economies affect the #electrification trend and what transformations of the… https://t.co/mad0Dg0tgE

New Podcast! Automotive R&D is at a pivotal moment as we enter a new age of vehicles, with #electrification,… https://t.co/EzIw2Y657k