An extraordinary counter-cyclical build is under way in the world's liquefied natural gas (LNG) industry. Over the last year, a surplus has emerged and global spot prices for both gas and LNG have more than halved. Aside from the usual disclaimers about market uncertainties, the current market weakness is widely expected to continue in 2020 and possibly beyond.

Yet producers are not deterred. On the contrary, they are showing a willingness, indeed a determination, to look beyond the present cycle and invest for the future in the belief that the long-term demand for their product is growing and robust. The year 2019 set a new high-water mark for the volume of global LNG capacity reaching final investment decision (FID). A further substantial tranche is expected in 2020.

For those who decry short-termism in business decisions, this should be welcomed. It is unusual and striking to see companies able to allocate big capital expenditure budgets at a time when current earnings are under pressure and there is a focus on capital discipline and returning money to shareholders. However, it takes approximately four to six years to build a new LNG train from the point of FID to the point of commercial start-up, so it is unquestionably correct that today's market environment is of little relevance for future projects and their returns.

Success will depend on the ability to read and ride the cycles—both the cost cycle during construction and the price cycle during operation. LNG is a high-capex business. Historically LNG has been able to avoid or moderate excessive price cycles because of a reliance on rigid long-term contracts. Investments in LNG were only made after demand was committed through a 15- or 20-year purchasing contract. Customer demand effectively rationed supply. This is changing as the industry commoditizes, companies make speculative investments, and short-term trading grows. Therefore, LNG is likely to see many of the cyclical features of other high-capex businesses, such as refining, petrochemicals, and oil.

The question comes to the fore: Is the counter-cyclical build a wise strategic move to position for the future? Or is it simply setting up the next boom and bust?

In early 2018, the LNG industry was at an investment impasse. IHS Markit put forward three pathways:

In the last 12 months, the investment impasse has been broken dramatically. Buyers have partially returned. We have seen projects move forward with traditional long-term contract backing by buyers, most notably in Mozambique and the US (Calcasieu Pass LNG and Cheniere Energy). Perhaps more striking is that the three largest FIDs of the last year or so (LNG Canada, Golden Pass, and Arctic LNG 2) have been made largely in the absence of long-term contracts. IHS Markit has revised our supply and demand outlooks - both upwards. However, based upon the investment boom of 2019 - which is forecast to continue in 2020 with impending Qatari expansion - we continue to anticipate supply outpacing demand.

Based on our expectations for FIDs until the end of 2020, our analysis suggests that no further FIDs would be required for the following three years in order for demand to catch up with supply. This halt to new project investment will not happen. The momentum and strategic drivers behind many of the world's LNG projects mean that there will be continued investment, although at a much slower pace. (see Figure 1). 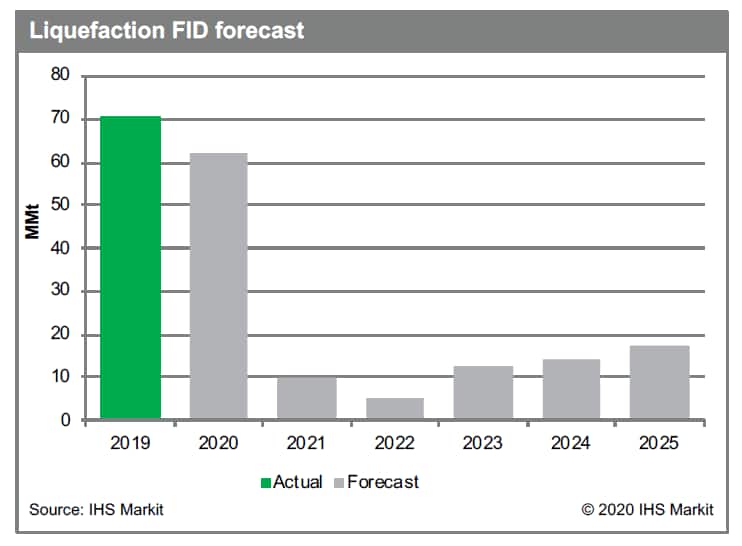 The risk of future oversupply increased in late November 2019 following a major announcement in Qatar. Qatar currently supplies about 77 metric tons (mt) of LNG, about 20% of global LNG. Qatar Petroleum (QP) announced that the country will increase—again—its LNG output target. In 2017, QP stated that it would raise capacity from 77mt to 100mt. The following year it raised that target to 110mt. In the November 2019 statement, the target was further raised to 126mt, an increase of 64% by 2027 over today. As the low-cost producer, the Qataris are apparently undeterred by risk of cycles and oversupply; indeed, they may see a strategic imperative to pre-empt and choke off higher-cost competitors. It is important to recall that a self-imposed moratorium on expansion by Qatar in 2005 was what partly enabled Australian and US LNG to become major players.

The headline announcement of an increase in LNG capacity investment was accompanied by a second far-reaching development. QP announced an effective doubling of their gas resources from just under 900 trillion cubic feet (Tcf) to 1,760 Tcf. It is mportant to emphasize that the degree of appraisal of these reserves is unclear, and it is not known to what extent they have been externally certified. They may not reach the standard of certainty to be classified as "proven reserves." Nevertheless, the reality is that Qatar is signaling a newfound confidence and desire to expand on a huge scale. The new target of 126mt may be just the first step in a new drive upward. One consequence is that the cyclical global investment is happening in reverse - in the sense that the higher-cost projects have gone forward first, and the lower-cost projects (including the Russian Arctic) are piling in later.

One possible positive scenario is that the producers will use the time that they have between project FID and project start-up to "build demand," by which we mean investments downstream including regasification, bunkering, and power generation. However, the experience to date of forward integration has produced limited and disappointing results, despite efforts by leading international oil companies. The large growth in LNG demand in recent years was a policy-driven demand shift in China, which led to exceptional buying from Chinese importers. This unexpected or exogenous factor was much more significant than the results of downstream investments by the industry across Southeast Asia, for example. On the assumption that demand cannot be firmed up more quickly, it appears that the industry could be set for a second cycle, with surplus capacity emerging around 2025.

This second cycle of surplus capacity will be different from the current one. In the first oversupply period of 2019-20, it is primarily the off-takers/buyers who are exposed. In the second cycle, increasingly it will be the producers who face any exposure. This shift in exposure should be seen as normal in the transition to a commoditized market.

How will the market balance?

As traditional long-term contracts play a less important role and as buyers assume less volume risk, the LNG market will need to find a new mechanism for balancing supply and demand.

With most commodities, storage plays a fundamental role in matching supply and demand. For LNG and gas more generally, storage post-liquefaction is in relatively short supply and at high cost.

In practice, the global LNG market is balancing seasonality in Europe, using European gas storage and coal-to-gas switching in the power sector. However, surplus LNG capacity will be difficult to place fully in the European market. IHS Markit continues to believe that during periods of trough demand, the highest cost or most flexible supply may be forced to ramp down. We have already seen several sell-side tenders cancelled because of low prices. A large proportion of this swing capacity is likely to be located in the United States, because of its ability to arbitrage sales between the large US gas market and the international LNG market. But other plants around the world may also have a swing role, such as the coal-seam gas projects in Eastern Australia and aging depreciated plants with declining upstream gas reserves such as those in Indonesia.

Therefore IHS Markit is expecting swing supply to become a new feature of the market. It is the logical outcome of the shift away from relatively rigid long-term contracts with high take-or-pay obligations to projects without any underlying long-term commitments. And cycles look set to be a structural feature of the industry.

Michael Stoppard is a Chief Strategist for Global Gas at IHS Markit and vice chairman for CERAWeek.

Get information, analytics, and expertise on the LNG value chain, including short- and long-term supply, demand, and price forecasts as well as insight on LNG assets, pricing, and contracts.
Find out more
Subscribe to RSS Feed