Lithium-ion batteries (LIBs) began to impact the rechargeable or secondary battery market for portable electronic devices at the turn of this century. Nickel metal hydride (NiMH) rare earth-containing batteries, the main competitor two decades ago, quickly lost share to LIBs due to the combination of superior rechargeabil- ity, higher energy density, and lower size and weight.

All LIBs have one element in common, lithium. Yet the combination of cathode materials, the beating heart of the battery cell, is in constant flux. Lithium cobalt oxide (LCO) cathodes, which have a 60% cobalt content and are installed in the bulk of smart phones and laptops, are steadily losing market share to higher energy density lithium nickel manganese cobalt oxide (NMC) cathodes. NMC cathodes have a lower cobalt content, less than 20%, and they power high-performance long-range electric vehicles (EVs).

NMC technology is experiencing a noticeable shift from cobalt-rich to nickel-rich cathodes, as seen in the Figure below. 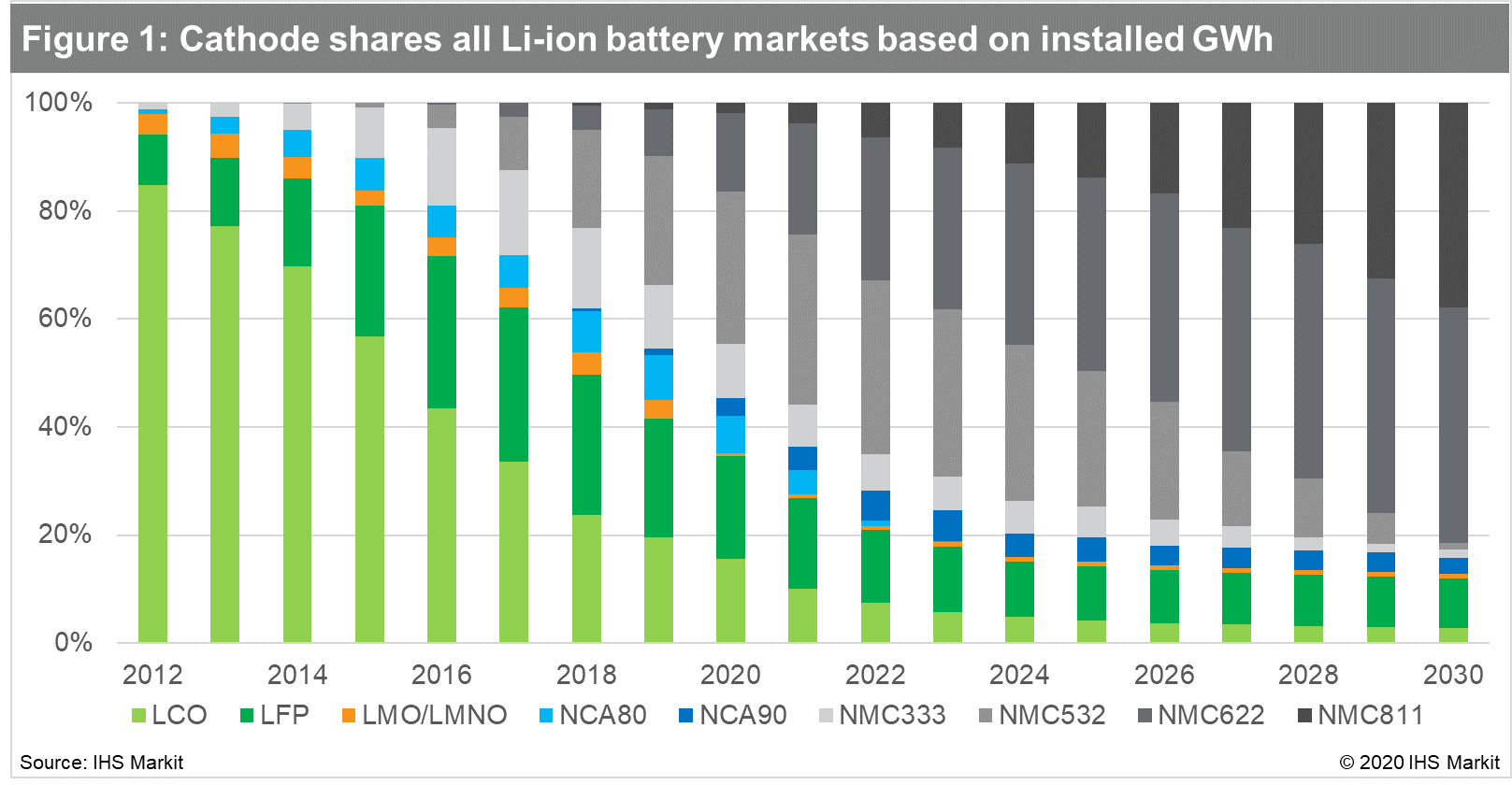 In general, a higher cobalt content correlates with a more expensive battery, and higher nickel content equals greater energy density. Energy density is proportional to the range that the EV can drive on a single charging cycle. Lithium iron phosphate (LFP) and lithium manganese oxide (LMO) began to be phased out of the market because of low energy density. LFP, however, remains in the running thanks to its inherent safety, low cost, and independence of the cobalt and nickel supply chain. IHS Markit is forecasting a resurgence in LFP in EV's, whilst also continuing to gain market share in e-buses, and grid storage applications. Lithium nickel cobalt aluminum oxide (NCA) cathodes, used by Tesla, are forecast to lose share over the next five years.

Will nickel challenge cobalt's crown?
Probably yes, but not so fast. Today, LIBs count for over
half of global cobalt consumption. Despite the migration towards high-nickel cathodes, total cobalt demand is expected to double by 2025, with demand driven by EVs. Cobalt is necessary for the structural stability of the battery. Lack of structural stability results in decreasing cycle life and a sharp loss in storage capacity.

Is cobalt the blood diamonds of batteries?
The sources of cobalt include: large-scale mines (78%), artisanal and small-scale mining (12%), and recycling (10%). The use of cobalt is associated with considerable reputational risk for the automotive and electronics industries. Large-scale mines frequently rely on dubious practices around acquiring and maintaining mining licenses. Artisanal and small-scale mines are sometimes illegal. They often use irresponsible practices and inadequate equipment, putting the health of workers at risk. About 2% of the total cobalt supply is mined by child labor.
The supply of mined raw materials is highly concen- trated in the Democratic Republic of Congo, which poses a risk to the robustness of the entire supply chain. Approximately 99% of cobalt is extracted as a byproduct of copper and nickel mining, which makes it greatly dependent on future supply and demand developments of those materials. The processing of raw materials into cathodes, cells, and batteries is concentrated in Asia, particularly mainland China - which also poses a risk to the security of the supply chain.

By 2030, over 80% of lithium will be mined for EVs
In 2000, about 9% of lithium produced was used for batteries. By 2020, this share rose to 66% and it is forecast to reach over 90% by 2030. Other lithium applications - including ceramics, glass, and lubricants - still play an important role, but they tend to grow along with GDP. Lithium raw materials and chemicals suppliers had to respond quickly to produce different high-specification materials and production quantities. While demand for lithium and cobalt is already dependent on the battery market, less than 5% of nickel is consumed in LIB manufacturing. Most nickel is consumed in the manufacture of stainless steel. As shown in Figure below, the growth of cobalt in LIBs will begin to slow, whereas nickel consumption will increase significantly. 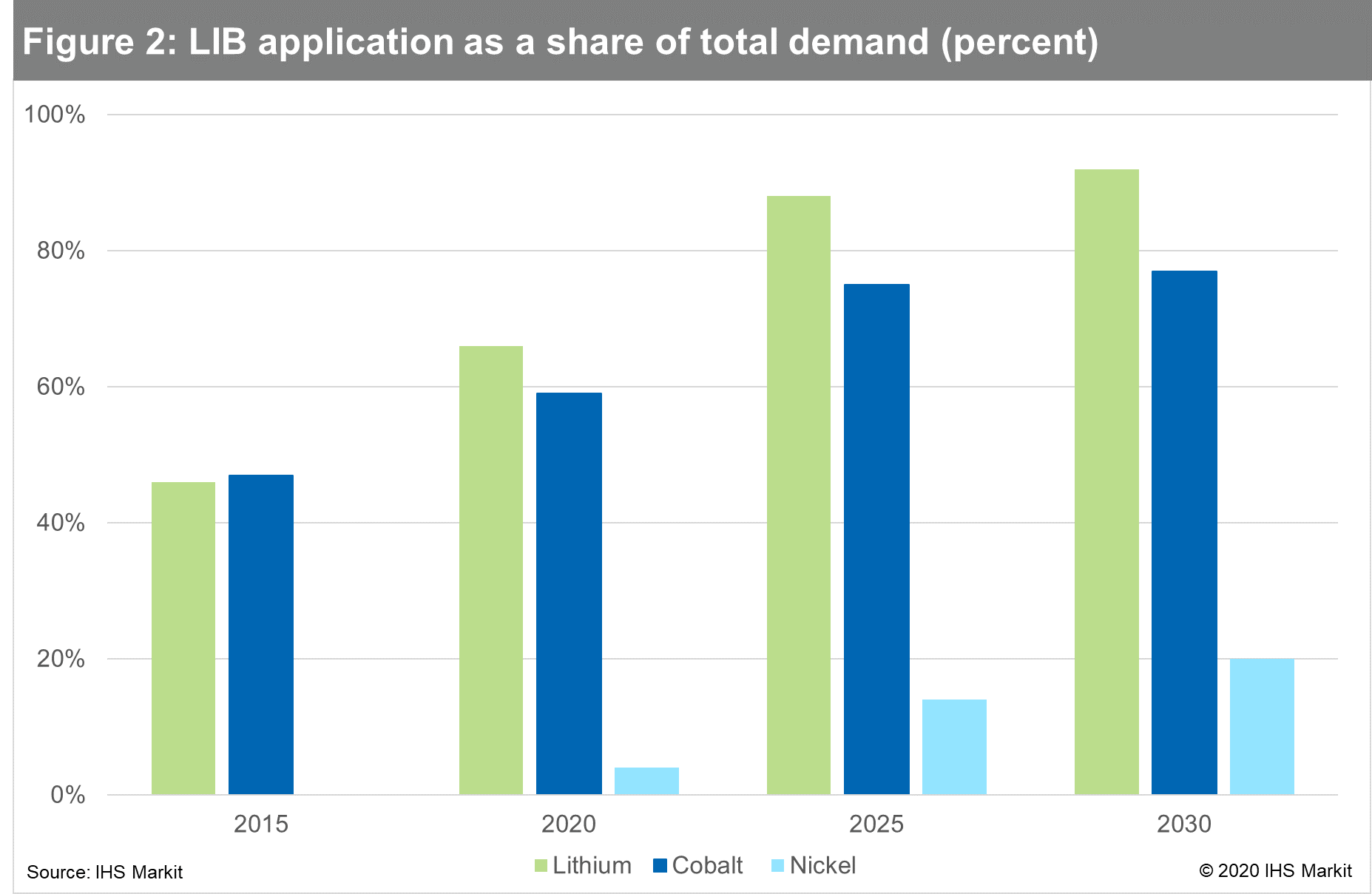 Sourcing of lithium raw materials and chemicals is changing
Lithium is mined from both hard rock and underground brine deposits. Lithium containing spodu- mene ore is mined from open pits and typically concentrated by flotation methods on site. Australia is the largest producer and exporter of spodumene concentrate. Spodumene concentrate is converted into lithium carbonate or lithium hydroxide, primarily in China. Most brine-based lithium mining capacity is located in Chile and Argentina. Brine is extracted from salars (salt-encrusted depressions in the earth) and pumped into evaporation ponds, where the power of the sun concentrates the brine. Lithium carbonate is precipitated using soda ash or lime and can be further processed into lithium hydroxide, which is required in new high-nickel battery cathode chemistries.
The US was the biggest producer of lithium until 1997, utilizing Nevada's brines and North Carolina's spodumene belt. For two decades, brine-based production from Chile and Argentina dominated the supply landscape, due to lower production costs. Emergence of several Australian spodumene produc- ers over recent years has changed this situation, and spodumene capacity now accounts for more than two-thirds of lithium supply.

Other chemicals, electrolytes, and anodes play a role
Electrolytes serve as a medium to transport lithium ions between the cathode and anode in a battery cell. Typical liquid electrolytes are mixtures of solvent (80%) and lithium salts and additives (20%). The most widely electrolytes are used in the majority of LIBs, and work is under way to develop ceramic (solid), gel, and polymer electrolytes with even better electrochemical performance. Electrolytes are currently produced in China, Japan, and the US, but the development of Europe's own battery supply chain has led to major investments in local producers, who could commence production within the next five years.
LIB anodes are produced from spherical graphite. Graphite mining and processing is linked to environ- mental pollution, so there is less interest in expanding graphite-producing capacities globally. China has large capacities in both the mining and processing stages. Mozambique and Madagascar have ramped up capacity at new mines over the last five years, with most output destined for China for processing. Silicon, a more environmentally sustainable anode material, could replace graphite in the future. Graphite and silicon-blended anodes are already being used in combination with some high-nickel NMC and NCA cathodes.

Supply should meet demand, but type and quality are constantly evolving
Lithium, cobalt, and nickel production capacity should meet the surge in demand. Established players are incrementally increasing capacity, and many new producers are eager to gain their slice of the electro- mobility cake. Cathode raw material suppliers will have to remain flexible in their choice and quality of chemicals offered so they can effectively supply this dynamic lithium-ion battery revolution.

Stay informed with our Insights publication a unique perspective of the key issues shaping the global energy, chemical and agribusiness markets.