Lipitor Patent Expiration - The End of an Era for Atorvastatin Sales

Today, 30 November 2011, will go down in the pages of history as one of the most symbolic and important days for the global pharmaceutical industry, as Lipitor - commonly known as atorvastatin - loses patent exclusivity in the US. Lipitor's patent expiration closes the chapter on one of the most remarkable commercial stories in the industry's history.

At its peak, Lipitor clocked approximately $13 Bn in annual sales for Pfizer - making it the best-selling product ever, and turning the pharma player into the world's largest pharmaceutical company. In the current climate it's hard to imagine a recurrence of this pharmaceutical blockbuster dream.

So how did Pfizer achieve this?

A Very Brief History of Statins
It all started long before the development of the first statin, with the publication of the lipid hypothesis in the 1850s. This was followed by the first landmark study named the Framingham Heart Study - ongoing since 1948 - which highlighted to the world the major heart attack risk factors, such as smoking, hypertension, obesity, and high cholesterol. It marked the beginning of research in deciphering the role of cholesterol and overall lipids in cardio-metabolic disorders.

However, it would take another 40 years from the publication of the Framingham Heart Study for the first statin to make it to the market, and the credit goes primarily to the work of biochemist Akira Endo, who isolated the first statin, mevastatin, from fermentation broths while at Sankyo, a Japanese pharmaceutical company. Ironically, Sankyo never developed statins commercially.

Merck in 1987 was the first company to develop and commercialize the first two statins (Mevacor and Zocor).

With statins already on the market, how did Pfizer enter the game and turn what could have been a poorly differentiated "me-too" drug into a pharma phenomenon?

Pfizer's Entry into the Statin Matrix
Parke Davis' entry into the statin world was quite dramatic, as Bruce Roth (the lead chemist at that time) and Roger Newton (head biologist for the program) battled with the Parke-Davis management, which believed that, given their statin would be the fifth to enter the market, it would face difficulty in gaining traction against existing agents.

In 1970, Warner-Lambert acquired Park Davis and felt that a marketing partner would help them compete more effectively. So in 1997, Warner-Lambert signed a co-marketing deal with Pfizer to market Lipitor. The two companies finally merged in 2000, forming the present-day Pfizer. However, it would take a co-ordinated strategic approach on Pfizer's management to push Lipitor to the market.

The Journey of Lipitor: The Quintessential Formula For Success
Lipitor was first launched in the US on 17 December 1996 and by the end of 2010 had garnered cumulative sales of $118 Billion for Pfizer.

Much of its success is attributed to a unified strategy consisting of hyper-aggressive marketing, deft timing, financial power, and plain simple luck. A secret ingredient of this successful formula is the co-ordinated use of outcomes data to market and position clinical assets. In fact this success led to the development of a more outcome-driven business model across the entire industry.

While Pfizer was renowned for its world-class sales force, simple marketing was not enough to push the product. To create momentum, Pfizer invested $800 million in various studies to highlight the importance of driving LDL cholesterol as low as possible. Pfizer pushed the boundaries of advertising budgets in promoting the potency of Lipitor over already available statins. 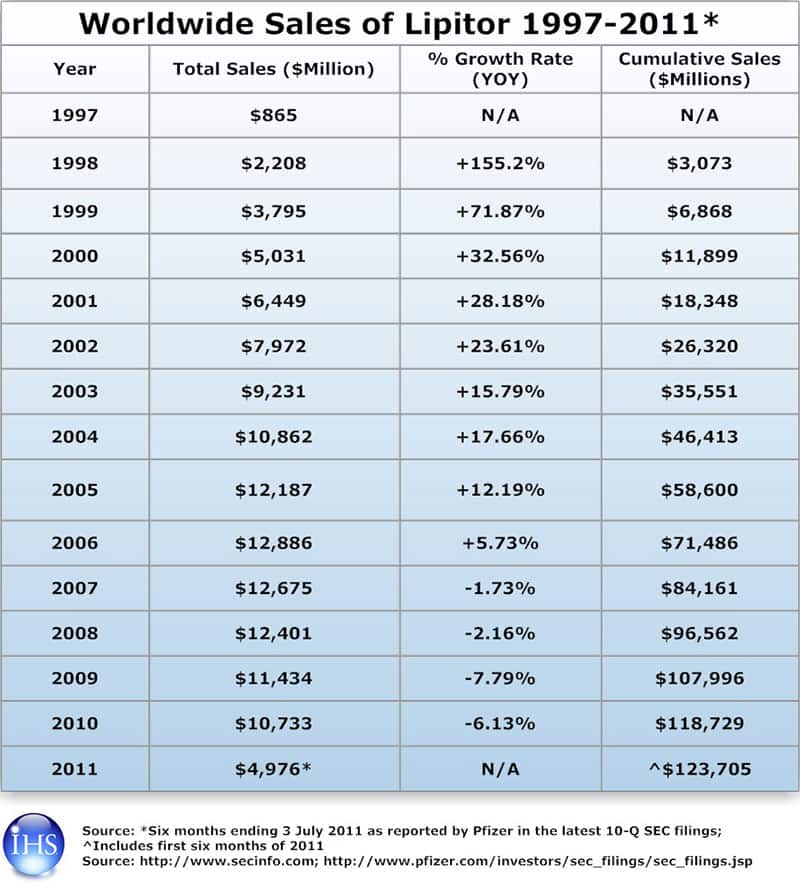 Lipitor Drives a New Clinical Paradigm
Much of the evidence gathered from these studies changed the way clinical practice viewed the importance of lowering LDL cholesterol, and LDL became an acceptable surrogate endpoint for the majority of clinical trials in lipid management, diabetes therapy and cardiovascular disorders. In addition, it expanded the patient population who could benefit from Lipitor therapy.

The effect of this change in clinical ideology was exemplified by the revision of the NIH guidelines in 2004 to support high-potency statins, suggesting more aggressive treatment options for patients at high or moderately high risk of a heart attack. The revised guidelines were based on a comprehensive review of five clinical trials, including HPS, PROSPER, ALLHAT-LLT, ASCOT-LLA, and PROVE IT, all have LDL as an important clinical endpoint to derive conclusions and recommendations.

What Next for Pfizer Now Lipitor's Patent has Expired?
One key lesson to be learned from Lipitor's success is the clear benefit of using modular approaches in portfolio management. Pfizer's perception of the market for Lipitor has evolved internally, and the management's actions have changed proactively with time. Initial years were more dedicated towards aggressive capture of market share, while later years focused more on defending the turf on jurisprudicial grounds

But what next for Pfizer after Lipitor's patent expiration? As the business climate evolves and the life cycle of Lipitor comes to an end, it seems the company is trying to go beyond the traditional supply chain model in the pharma industry. Recently, the company announced that it is examining strategies to extend the life cycle of the drug and retain a large portion of revenues. This may involve tactics such as implementing an OTC switch, or selling Lipitor at generic prices directly to patients. If these moves are approved by regulators, especially the latter, it will create a new set-point for the pharmaceutical industry.

We do not know for certain what the future holds for Lipitor and Pfizer - with a loss in market share definitely on the cards. However one thing is certain: the legacy of Lipitor will continue to shape the therapeutic world of CVDs and this day will certainly mark the end of an era.