Lincoln MKZ is step in right direction, but more is needed

If the new 2013 Lincoln MKZ does as well after its launch as it has beforehand, it will be a huge success. At both the North American International Auto Show in Detroit in January (concept vehicle) and the New York International Auto Show just a couple of weeks ago (final production version), the media raved about the car. Two compliments were mentioned repeatedly: the car's styling is modern, clean and elegant, and there is virtually no similarity visually between the MKZ and its sister vehicle, the new Ford Fusion. This differentiation from the Fusion is important and a new development; past entry-level Lincolns have had more than a passing resemblance to both Ford and Mercury counterparts.

Recently the MKZ has gotten more praise. Adam Jonas, a Morgan Stanley automotive analyst, commented, "The car is stunning...it shows Ford's commitment to the brand…you have to hand it to them; they're really going for it." The head of a design firm in San Francisco, Mr. Gadi Amit, recently said of the new MKZ's front grill, "Everything flows together very nicely. It's very elegant, very refined."†

If there is one part of the premium space Lincoln needs to get right, it is the luxury compact car segment in which the MKZ competes. This is the largest premium segment and accounts for almost 30% of all premium registrations. Because of the low prices of the models in this segment, these cars often appeal to owners of non-luxury products such as the Fusion, Avalon, Camry, Altima, and LaCrosse who want to move up to a more prestigious nameplate. And if Lincoln can get someone into an MKZ, hopefully down the road that buyer will step up to the more profitable MKS, MKX or MKT.

But Lincoln can only do so much with the MKZ. As the nearby table illustrates, Lincoln currently offers only five cars and light trucks, tied with Infiniti and Cadillac for the lowest number of entries among the high-volume luxury makes. And Lincoln's products cover less than 80% of the luxury market based on volume. It's as if a basketball team is trying to compete with just four players. In contrast, Audi and Mercedes-Benz both offer 14 models, almost three times Lincoln's product slate. Two glaring holes that Lincoln needs to fill are the luxury compact CUV and luxury sport categories; together these account for more than 12% of the luxury space. The Polk U.S. Forecasting Practice believes a small Lincoln crossover built on the Escape architecture is in the pipeline, and Lincoln dealers could use that product as soon as possible. 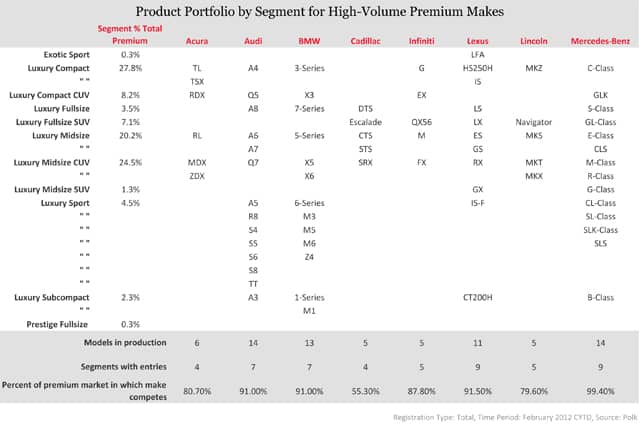