Mexico has been liquifying some of its oil assets, but instead of deep-water blocks, it has mainly been oil fields closer to shore. This has been quite disappointing for companies interested in the country. Shell, Petronas, Total and Repsol have been some of the first companies to bid, but President López Obrador has been making it clear that there will be no new auctions for at least three years. The potential is big for this Latin American producer, but progress remains small as the country seems to keep most paths of expansion closed. State-controlled Pemex is estimated to only control marginally less than a third of the deep-water acreage auctioned in the country since 2015. The first deep-water project of Mexico to start producing will probably be the Trion, a joint venture between Pemex and BHP, with the first barrels anticipated in late 2024.

Meanwhile, Mexico has been increasingly relying on US imports of oil products. Crude oil input of domestic petroleum refineries has been declining only reaching to around 600 thousand b/d in 2018. The country's refinery capacity has mainly been absorbing domestically produced light crude oil. The capacity of all six refineries in the country, owned and operated by Pemex, stands at about 1.6 million b/d. Mexico has been importing much more motor gasoline and other oil products, primarily from the US.

US refineries' appetite for heavy Mexican crude oil blends has been quite strong, especially after the collapse of Venezuelan production and exports due to the US sanctions.

The "National Refining Plan", an initiative announced by the Mexican government in September 2018, targets to make the country's energy independent by 2022. All Pemex's six refineries will be upgraded and reconfigured, with a seventh to be constructed in Dos Bocas with a design capacity of 340 thousand b/d.

President López Obrador recently presented the Business Plan of Pemex by 2023. His government plans to support the company for the first three years with a budget and tax reduction which will provide the required capital to Pemex to invest. This will allow the company to increase its production and become profitable, contributing to the development of the Mexican economy. Over the next three years, support of around 141 billion pesos (7.4 billion USD) will strengthen the finances of Pemex until 2022. The global market's response has been very positive, with the peso falling further and indices based on Mexican stocks reporting losses. Bankers have already been commenting that ratings both for the company and for Mexico's sovereign debt will be downgraded any time soon. 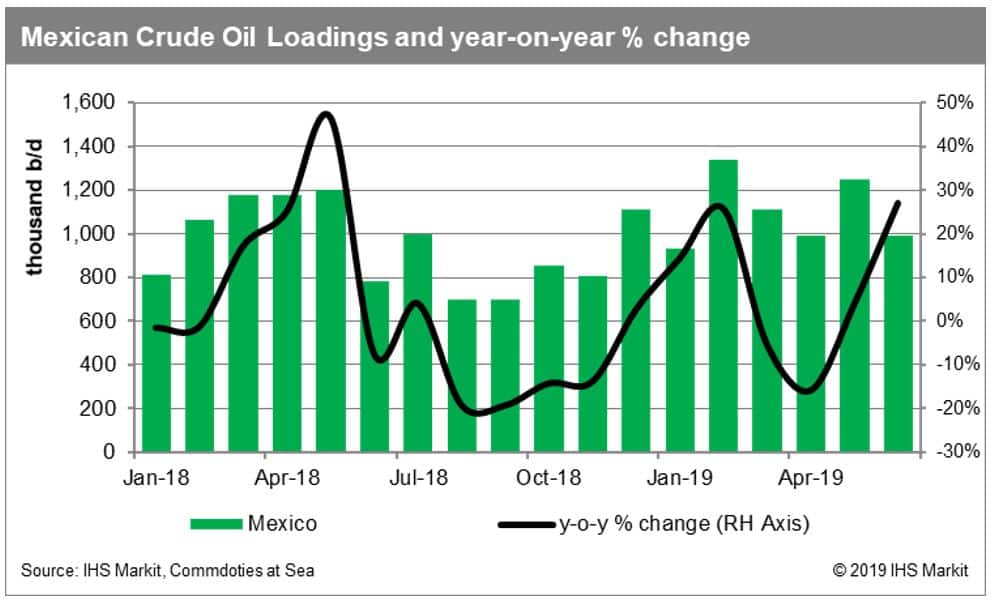 In terms of international shipments, Mexico has been loading around 1,100 thousand b/d on ships with the majority of them heading to the US according to data by IHS Markit's Commodities at Sea. The North American country has been absorbing almost half of the Mexican barrels exported on ships with its market share standing at 48% in H1 2019. Overall, seaborne exports increased by 8% between January and June 2019, year-on-year. However, volatility has been dramatically high. 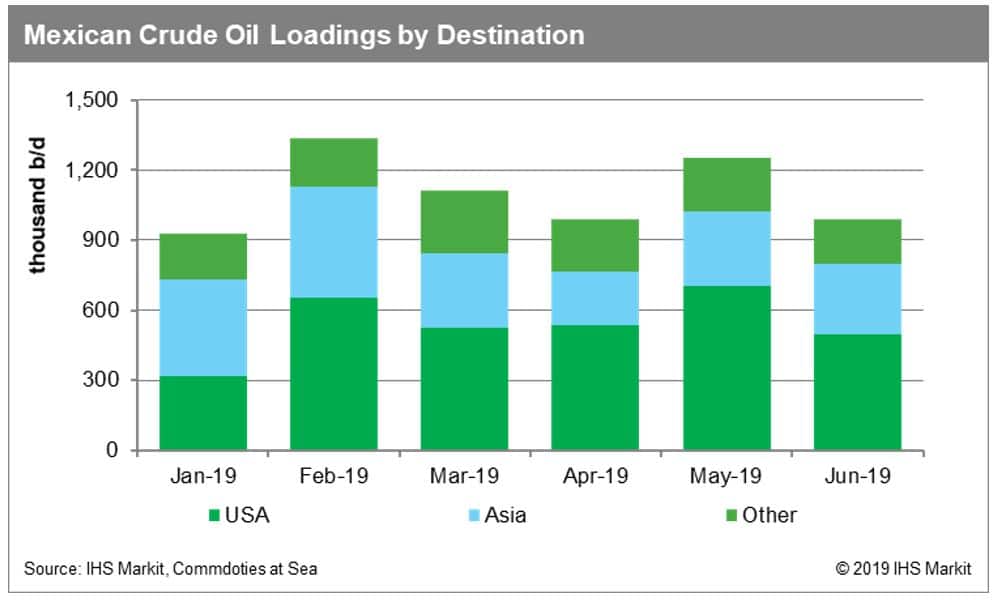