In January, protests resurged in Lebanon with a focus on the banking sector, reportedly leading to hundreds of injuries during the month as security forces fought back against protesters vandalising bank branches, cashpoints, and the central bank's headquarters. The recent re-escalation of protests and continued deposit flight led the central bank to place formal limits on capital movements with additional measures under consideration to solidify and regularise controls implemented on a bank-by-bank basis. The resurgence of protests and escalation of sovereign risks have led IHS Markit to consider the banking sector effects of potential scenarios, including the formal devaluation of the Lebanese pound and sovereign default 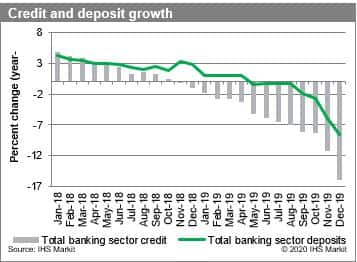 A Lebanese pound devaluation will lead to banking sector racpialization needs of at least 19% of nominal GDP. This estimate considers historical emerging market currency devaluations, the current parallel rate (LBP2450/1USD) and high levels of foreign currency lending (68.7% of total bank lending) in Lebanon to project an estimated 60% fall in the value of the Lebanese pound, followed by a 31-percentage-point increase in the sector-level gross NPL ratio. The devaluation will affect banks' capital buffers through three significant risk channels. Firstly, as the foreign currency portion of banks' risk-assets increases in value in terms of local currency, their risk-weighted assets will increase, putting downward pressure on capital adequacy ratios. Secondly, there will be an increase in NPLs owing to indirect foreign exchange risks, as borrowers will be less able to repay their foreign currency-denominated loans, which have increased in value in local currency terms. Finally, capital buffers will face further downward pressure as banks write off newly accumulated NPLs. Following the devaluation, banks will remain solvent but severely undercapitalised, requiring recapitalisation of 19-38% of nominal GDP to meet the Tier 1 capital adequacy ratio minimum of 8.5%. Of note when considering the impact of a Lebanese pound devaluation on the banking sector is the fact that banks' loan portfolios make up less than 23% of total banking sector assets. As such, even under a high-stress scenario such as a devaluation, banks' capital buffers are likely substantial to absorb related loan losses.

A haircut of at least 18% on deposits held at the central bank and banks' holdings of sovereign debt would force banks into insolvency, requiring recapitalisation of at least 25% of GDP. If the same 18% haircut is preceded by a devaluation, recapitalisation costs to reach the required Tier 1 capital adequacy ratio of 8.5% could be as high as 55% of nominal GDP. Although banks' overall exposure to the sovereign and central bank is high (68% of total assets), the share of the banks' sovereign debt holdings (13% of total assets) is relatively moderate. As such, commercial bank reserves held at the central bank - which are then on-lent to the government through the BDL's financial engineering system - make up the bulk (55% of total assets) of banks' exposure. It is important to note that although a currency devaluation or a sovereign default will reduce pressure on the Lebanese government's stock of official foreign exchange reserves, as long as it continues relying on banking sector inflows as its key source of foreign currency funding, risk is likely to resurge in the medium term.

The most feasible bank bailout scenario-barring foreign aid- following default or devaluation is large depositor bail-in. This would force depositors to convert their assets in commercial banks into equity stakes as a capital injection. The bail-in strategy is particularly viable in Lebanon, because of the enormity of deposits (around 300% of GDP) and the significant deposit concentration (in 2017, the IMF reported that the largest 1% of depositor accounts held 50% of banking sector deposits). Owing to this concentration, if 38% of large depositors' funds were converted into equity stakes, banks would have enough fresh capital to cover even the most severe scenario discussed in this report. This would deplete depositor confidence, limiting future capital inflows especially from non-resident depositors, but it may be a palatable option for political protestors, as large many depositors are likely members of the class of ruling elites against whom they are protesting. Lebanon does not currently have a bank resolution framework in place, however, so any measures to forcibly convert large depositors' funding will likely be met with drawn-out legal action.