The Lebanese government announced on 30 April that it reached an agreement on a financial recovery plan that spells out extreme losses for the banking sector. The plan includes the restructuring of several state-owned enterprises, the devaluation of the currency in the "foreseeable future", the restructuring of the BDL, the restructuring and recapitalisation of the banking sector, and efforts to reduce the government's debt burden. The banking sector's losses amount to at least 200% of forecast 2019 GDP- the largest banking-sector recapitalisation plan in modern history. On 1 May, Prime Minister Hassan Diab and Minister of Finance Ghazi Wazni signed a request for funding from the International Monetary Fund (IMF).

Firstly, the devaluation of the Lebanese pound will drastically alter the value of banks' foreign-currency balance sheet positions. Although the plan notably omits the exact timing of a currency devaluation, it states an expected exchange rate of LBP3,500:USD1 in 2020- a devaluation of around 57%. The plan states that the government will shift towards a more flexible exchange rate going forward and that the Lebanese pound will depreciate to LBP4,297:USD1 by 2024.

Secondly, the restructuring of the BDL will lead to losses worth LBP121 trillion for the banking sector. This amounts to USD34.6 billion (a 36% haircut) at the proposed exchange rate. This will be the result of a bail-in of banking-sector reserves held at the central bank to restructure the BDL. Despite this bail-in, the BDL will still hold a net negative capital position amounting to 17.3% of 2019 GDP.

Next, a banking-sector asset-quality review will reveal impairments of around 30% of banks' private-sector-loan portfolios- 6.5% of total banking-sector assets. Losses are likely to stem from the accumulation of non-performing loans (NPLs) since the outbreak of protests in October 2019 in Lebanon, losses resulting from the devaluation, and impairments associated with the spread of the coronavirus disease 2019 (COVID-19) virus. If additional loan-forbearance measures are announced or the currency is not devalued in the short term, additional losses may fail to accumulate until the medium term. 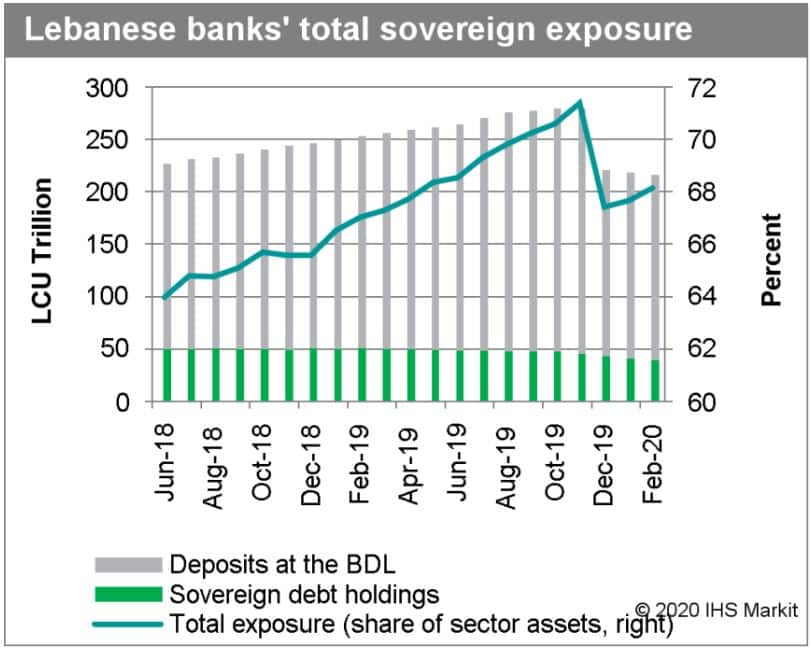 Extrapolating the sovereign-debt loss amount from the expected losses on banks' loan portfolios and exposures to the BDL leaves a sovereign-debt haircut of 48%, or LBP30 trillion based on the new exchange rate. IHS Markit has previously warned that a haircut of 18% or above on sovereign debt would result in the banking sector's insolvency. Losses from the haircut on commercial banks' reserves held at the BDL, the impairment of banks' loan books, and the sovereign-debt restructuring will lead to total banking-sector losses of LBP186 trillion (231% of forecast end-2019 GDP). This signals recapitalisation needs far beyond our expectations because of prior assumptions that the banking sector would not be made to bear the brunt of the central bank restructuring.

The plan first aims to recapitalise the banking sector with shareholders' equity and the retrieval of 'ill-gotten' funds. The government's plan for banking-sector recapitalisation calls for the complete bail-in of shareholders. To bridge the remaining funding gap (LBP154 trillion), the government will seize funds that were transferred from the banking sector since the implementation of capital controls in October 2019, particularly funds of 'politically exposed persons'. Additionally, the plan calls for bank owners to reinject any dividends distributed from 2016 to 2020 into their banks if they wish to remain owners after the restructuring. It is highly uncertain how many of these funds can be recouped. Finally, the most viable recapitalisation strategy outlined in the plan suggests that the banks should recapitalise using funds from those who benefited from the BDL's financial engineering system. This statement could be extended to most, if not all depositors, resulting in a de-facto depositor bail-in. 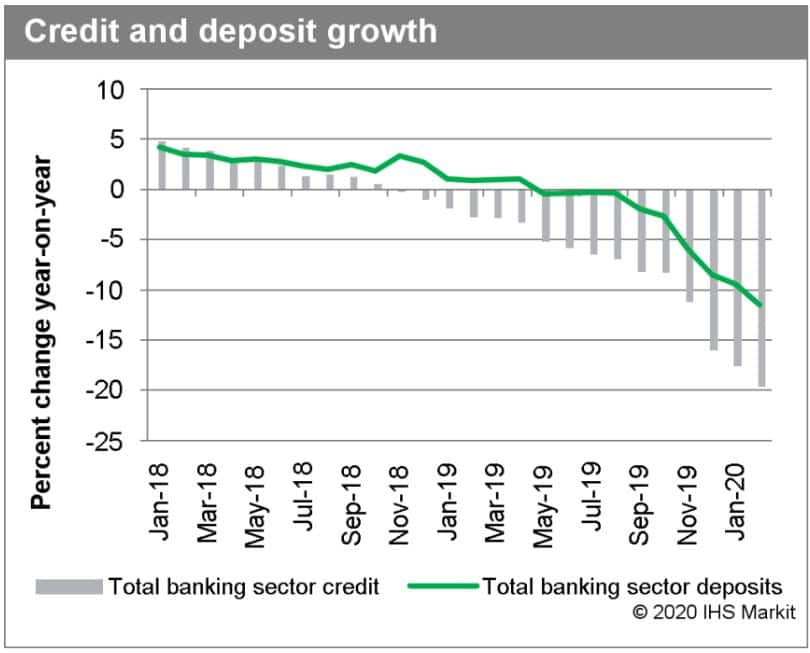 If sufficient funds are not recovered through initial strategies, the plan ultimately calls for the voluntary conversion of large depositors' funds to equity stakes. We have previously suggested large depositor bail-in as the government's most viable recapitalisation strategy. Depositors will also be able to choose to have funds converted to subordinated debt at their banks or equity stakes in the 'recovery fund'. The plan notably lacks an alternative source of recapitalisation should banks fail to convince depositors to agree to one of these 'voluntary' options.