Launch in the time of cost containment: How are European countries positioned to fund emerging breakthroughs in oncology?

French President François Hollande pledged in March to raise the issue of high medicines prices at the upcoming meeting of the G7 nations in Japan; the European Medicines Agency published an article in May asking how regulators can influence medicines pricing; the Dutch government announced in June that Austria will join Belgium, the Netherlands and Luxembourg in the joint procurement of certain rare-disease and orphan medicines: recent developments indicate a growing emphasis on greater co-operation among governments in seeking to manage pharmaceutical costs.

That we have seen this trend begin to snowball reflects the profound shift that has occurred across the healthcare landscape, as the "patent cliff" has given way to an era of next-generation therapies holding the potential to revolutionize treatment for relatively large numbers of patients. Against this backdrop, question marks over the sustainability of industry pipelines have been replaced by question marks over the sustainability of healthcare systems.

What is, without question, an immense wave of progress for patients is also posing challenging questions for policymakers, payers and healthcare stakeholders more broadly. Accentuated by the global financial crisis, and driven by secular trends such as ageing populations and a slowing pace of economic growth, many countries are in the midst of, or embarking upon, major cost-saving drives. This reality means that the next wave of treatment breakthroughs coincides with a period when cost containment is firmly on the agenda.

Although much has been said regarding the sustainability of pharmaceutical spending, and debate has centred in particular on list prices of emerging therapies, what has been absent so far is an analysis which helps to frame the discussion in terms of broader healthcare financing trends, both recent and forecast. In order to explore this topic more fully, we here in the IHS Life Sciences team recently authored a special report offering a reflection on healthcare access and financing trends in Europe.

A comparative discussion looking at France, Germany, the Netherlands, Poland, Spain and the United Kingdom, our report is available for download. It considers the structure of the healthcare market in each country with regards to public and private contributions, how expenditure is distributed across different categories of care, and the evolution of pharmaceutical spending both in general and with a particular focus on oncology.

As part of our analysis, we complemented top-line forecasts of oncology pharmaceutical expenditure with a "bottom up" approach modelling the budget impact of emerging therapy classes. To this end, we chose the programmed death 1 (PD-1) and programmed death 1 ligand (PD-L1) monoclonal antibodies in second-line metastatic or stage IIIb non-small cell lung cancer (NSCLC), and the cyclin-dependent kinase 4/6 (CDK4/6) inhibitors in first-line treatment in combination with endocrine therapy in oestrogen receptor-positive, HER2-negative advanced breast cancer.

Figure 1 highlights results from this budget-impact analysis through 2020, which relied on certain assumptions concerning clinical outcomes, pricing, discounting, and market uptake, the particulars of which are outlined in detail in the appendix of our report. 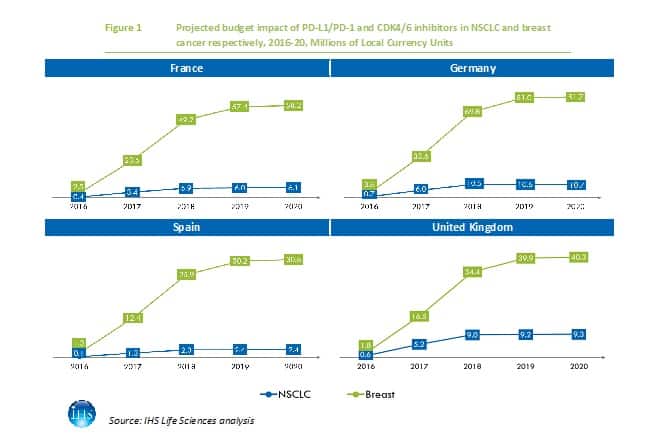 While any forecast inevitably relies on a core set of assumptions, and it should be underlined that actual pricing and reimbursement outcomes are subject to many variables, this finding suggests that anxieties over the budget impact of certain emerging therapy classes may be overstated.

Of course, certain countries are predicted to face more pronounced budgetary pressures than others, and additional research could shed light on the potential impact of other therapy classes as well as other therapeutic areas. Still, it seems worthwhile to pose the question as to whether the funding requirements of many emerging therapies may be broadly achievable, assuming ongoing cost-containment efforts targeting other parts of the healthcare system or other areas of government spending.

A broad-based discussion around existing policy arrangements and cost containment is warranted to ensure that European countries do not see deterioration in health outcomes relative to the advances made possible by emerging treatments.