The impact of COVID-19 is being felt across all sectors: in obvious ways for sectors like tourism and retail, and less direct but no less material ways for sectors like mining. When we ran an interim update factoring in the effects of COVID-19 through our Country Risk Investment Model, which looks at the impact of country risk on energy and commodity sectors in financial terms, a few interesting trends came to light.

The impact of COVID-19

It is no surprise that almost all sectors saw greater projected losses due to country risk. This is particularly true due to the expectation of recessions globally, and the rise in risk of strikes and protests. However, the sectors seeing the largest increase in average Country Risk Premiums (CRP) globally were the Hydro Power, Automotive, and Gas Onshore sectors - 0.24%, 0.19% and 0.10% average rise in the CRP, as compared to an overall average of 0.08% across the ten sectors in our model. These sectors also saw the largest average increase in NPV loss as compared to the base case excluding country risk - 1.58%, 1.84%, and 1.42% as compared to a 1.05% average. This means that these sectors are the most likely to see an increase in costs due the country risk ripples of COVID-19. 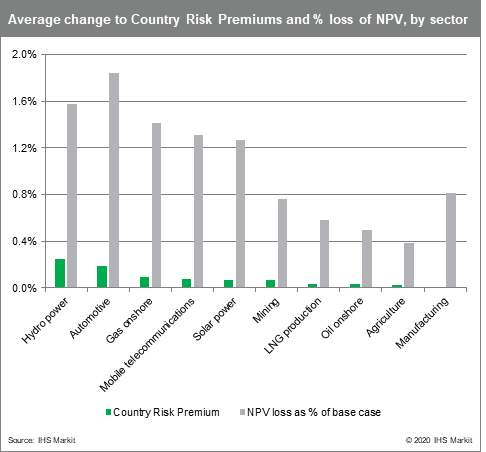 Despite larger rises in other sectors, the sector that continues to have the overall highest average CRP and NPV loss figures is the mining sector. Mining has an average CRP of 4.76% globally, compared to an average of 3.06% across all sectors, and a 72.76% average NPV loss, compared to an overall average of 49.60%. This suggests that mining is the most heavily impacted across all sectors in our Country Risk Investment Model by losses associated with country risk. 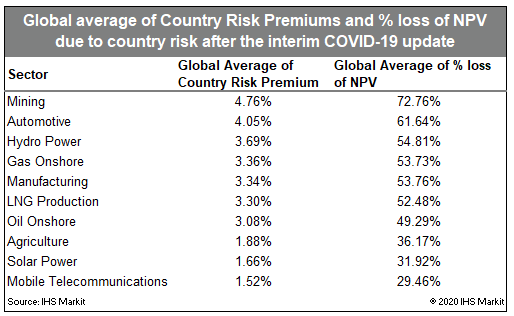 With the country risks driving losses in mining - contract risks, strikes and protests, and expropriation - all rising due to COVID-19, we're likely to see these losses play out globally - perhaps nowhere as clearly as in Latin America.

In Latin America, the risks to mining are clear

Learn more about our Country Risk Investment Model and how our sector-specific model can improve your investment choices.