The mix of new vehicle powertrains varies as much among the different regions of the United States as does the mix of makes and models, if not more so. The 15 Designated Market Areas (DMAs) with the highest percentage of hybrid powertrains together account for almost 30% of all hybrid registrations nationally, yet these same 15 markets include just 12.5% of all new vehicle registrations. Nine of these 15 hybrid-rich areas have a hybrid penetration greater than 6%, while the national penetration is 2.97%. In San Francisco, the market area with the highest hybrid mix, almost one of every 10 new vehicles sold is a hybrid.

Looking at the electric vehicle market, these same 15 metropolitan areas have accounted for 41% of all US electric vehicle registrations through the first 10 months of 2012. Two of these 15 areas, Los Angeles and San Francisco, by themselves captured a quarter of all electric vehicle sales nationally during the same time period. The 15 areas with such high concentrations of hybrid and electric vehicles are all located on the West Coast.

At the other end of the spectrum, the 15 market areas with the lowest hybrid concentration delivered just 5,422 hybrids through 10 months. This equates to a hybrid penetration of 1.53%, about one twentieth the hybrid penetration of the top 15 markets. These markets at the bottom of the hybrid list also fared poorly with electric vehicles, selling just 98 or less than 1% of all electrics. Yet these 15 markets sell 6.6% of all new vehicles nationally. These 15 geographical areas are generally in the central region of the country.

These data provide one illustration of why generalizing about the US new vehicle landscape based on one market area can be risky. 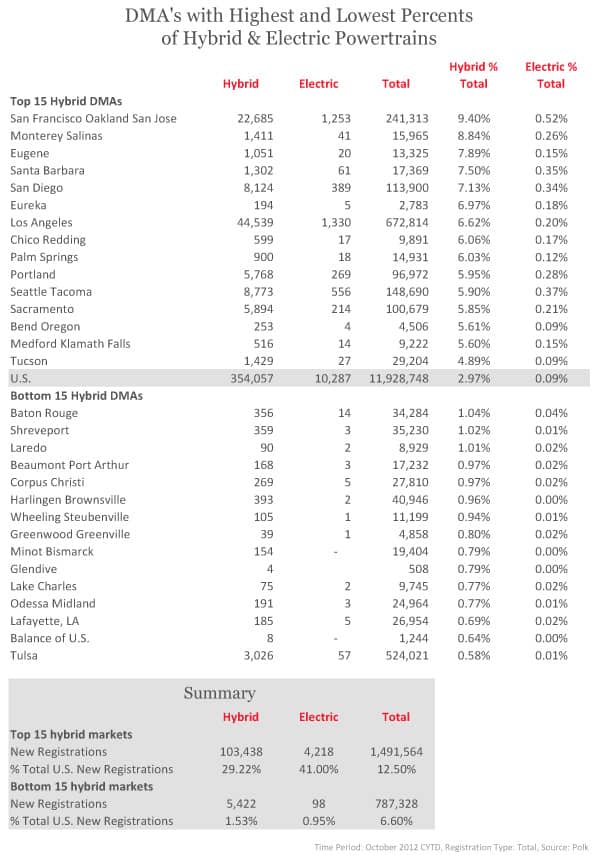