Land Rover and Dodge appeal to the young automotive buyer

Today's new vehicle buyer is just under 52 years old, up slightly from two years ago and about a year from 2009. Among luxury (non-exotic) makes, Land Rover has the youngest buyers, followed by Infiniti. The typical buyer of every Land Rover model is under 50, with the LR4 lowest at 46. Infiniti's average age has dropped by more than a year since 2011, due in part to the popularity of the Infiniti JX crossover (47.1 years). The Infiniti QX56 and QX80 are the largest Infinitis available, but they attract the youngest buyers, at 45 and 46, respectively. Tesla has also seen a drop of more than a year in its average age.

At the other end of the spectrum in the luxury space, Lincoln, Cadillac and Lexus appeal to the oldest buyers. The typical Lincoln customer is 61, oldest in the industry and virtually unchanged from three years ago. While the Town Car, with an average customer age of 67, has been discontinued, the typical MKS buyer is now 63, up from 61 three years ago.

In the non-luxury sector, Dodge now attracts the youngest buyers at 48.6 years, followed by Scion, Mazda, and Mitsubishi. The mix of 25-34 year olds at Dodge - 14.48% - is the highest in the industry. Durango and Charger buyers are the youngest at Dodge, at 45.6 and 46.8 years, respectively. The mainstream makes with the highest average age are Buick, Smartcar and Chrysler. Buick is the only non-luxury make with an average age of 60 or higher in both 2013 and 2011, and its mix of 75+ buyers in 2013 (19.2%) was the highest in the industry. Buick has been making a concerted effort to bring in young customers, but these data suggest more time is needed.

The industry-wide range of ages, from 47.9 to 61, is smaller than one might expect. One reason for this is that these data are based on the ages of the people who register the vehicles, and they are not always the same as the principal drivers. A father buying a car for his son will register the vehicle in the father's name, for example. The data used to compute the customer ages are personal registration data, so all fleet registrations are excluded. 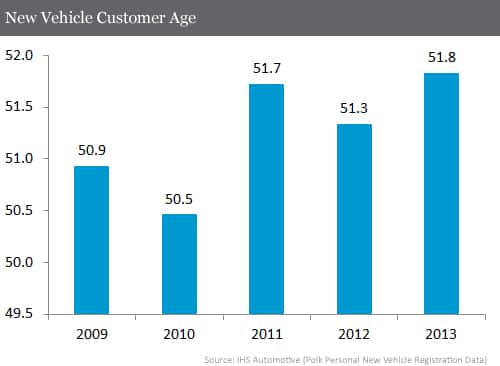 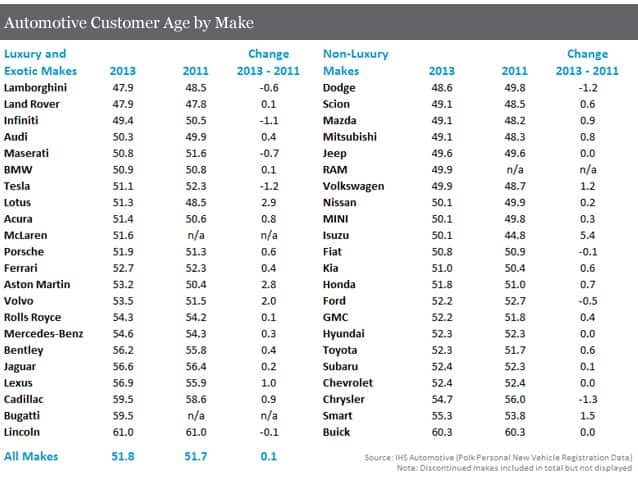