When the UK first faced the real possibility of leaving the EU, back in March 2019, the country's manufacturers were building up their safety stocks. Inventories were being amassed to ensure continuity of production in case of potential supply shortages, given that foreign trade flows could dry up without a trade deal in place. Brexit was eventually postponed. But in 2020, as the UK is once again set to leave the EU at the end of the year, the situation looks a lot different.

Three months before the first Brexit deadline in 2019, the IHS Markit/CIPS Purchasing Managers' Index (PMI) survey reported a rise in inventories of raw materials of a magnitude exceeded only once in almost two decades of survey history. An analysis of reasons cited for the increase in inventories showed that over one-in-ten producers were specifically building up safety stocks in case of Brexit-related disruptions to supply chains. This would rise to just over one-in-three by March of that year.

A similar situation was seen in the lead up to the next potential (but also subsequently postponed) Brexit deadline of 31st October 2019, with stockpiling by manufacturers widely reported. This time, the amount of stock building was less - approximately half - than seen ahead of the first Brexit deadline. But it was still one of the largest spells of inventory building seen over the survey's history.

In contrast, September 2020 has so far found extremely limited evidence of Brexit-related stock building by UK manufacturers. Whereas three months before the March and October 2019 Brexit deadlines, the survey found 11% and 4% of manufacturers having already started to build up Brexit-related stockpiles, so far there have under 2% of companies reporting such stock building. 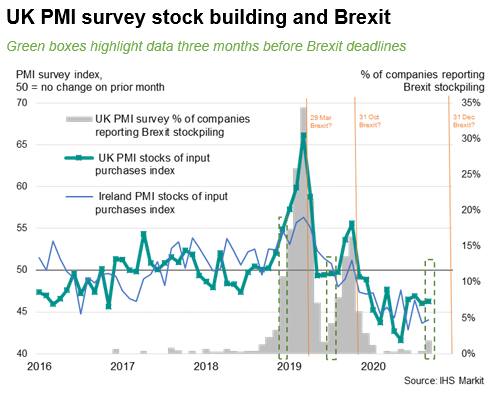 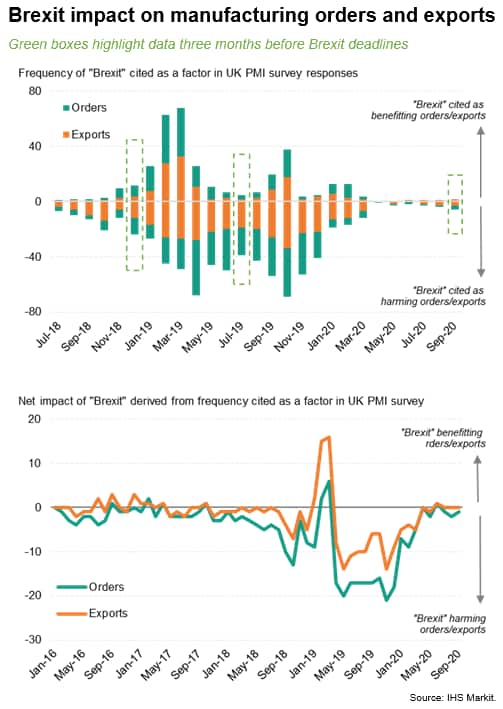 Furthermore, in contrast to the rising levels of inventories seen three months before the past Brexit deadlines, 2020 has so far seen a continual fall in inventory levels. This includes a further sharp decline recorded in September.

In a similar vein, the PMI survey is also picking up scant evidence of Brexit affecting manufacturing orders or exports so far in 2020, contrasting with the same periods in the lead-ups to the two Brexit deadlines in 2019. However, the survey responses have indicated that, with only a few exceptional months, the net effect of Brexit has so far been cited as negative in respect of both order books and exports, with the majority of the damage incurred in 2018 and 2019 through to early 2020.

The lack of pre-Brexit stock building so far in 2020 can in part be explained by manufacturers having been disrupted by the coronavirus disease 2019 (COVID-19), which has served as a major distraction among many firms, including in relation to ongoing difficulties sourcing inputs from abroad due to non-essential business closures earlier in the year and transportation issues.

It is also possible that Brexit 'fatigue' has set in, especially after costly stockpiling and warehousing in 2019 ultimately proved unnecessary as Brexit deadlines came and went.

At the time of writing, the UK Prime Minister Boris Johnson has effectively called a halt to trade talks unless the EU makes a "fundamental change of approach", his spokesperson announcing that "Trade talks are over. The EU have effectively ended them by saying they do not want to change their negotiating position." This brinksmanship adds to the risk of a potential 'no deal' Brexit by the end of the year. October's PMI data, the flash preliminary data for which are published on 23rd October, with data collected between 13-22nd October, will reveal whether UK producers are at last making preparations for possible supply issues as the Brexit deadline draws closer.