UK inflation has already risen to a decade high of 5.1%, and soaring utility bills look set to drive the cost of living higher in coming months. The Bank is pencilling in 6% inflation by April. The Bank's concern is that inflation expectations are rising, which could feed through to higher wage growth, meaning inflation stays uncomfortably high for longer than currently anticipated.

However, while Brexit and Omicron threaten to lead to further labour supply shortages, driving costs and wages up further, both factors are also likely to stymie economic growth. The juggling act for the Bank of England is to therefore steer a suitable course for policy among these signs of persistent inflation yet weakening economic growth. 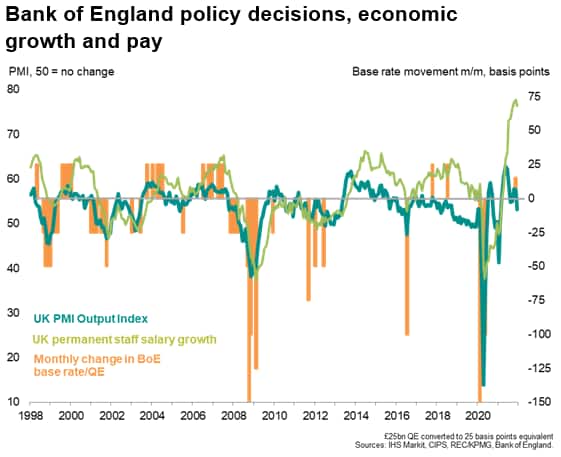 UK recruitment agencies reported a further strong rise in the number of people placed in permanent jobs in December, the rate of hiring running close to the record highs seen in prior recent months. The survey data, compiled by IHS Markit for the REC and KPMG, suggest that companies continued to take on impressive numbers of staff despite the rising spread of Covid-19 amid the emergence of the Omicron variant. Demand for staff from employers reportedly also continued to rise at a rate not seen over the two decades prior to the pandemic, albeit with the rate of growth of demand cooling further from July's recent peak to run at the lowest since April. This latest cooling will in part have reflected lower economic activity in December arising from the omicron spread. Note that business activity, as measured by the PMI, grew at the slowest rate since the lockdowns at the start of the year.

At the same time, staff availability continued to deteriorate at a rate rarely exceeded in the recruitment survey's 24-year history, albeit below the rate of deterioration seen in mid-2021.

This combination of strong demand for staff and deteriorating staff availability led to a further steep rise in wages as firms competed to attract staff.

Average starting salaries and average pay for temp/contract staff rose steeply again in December. For permanent salaries, only in October and November 2021 had the recruitment industry survey ever recorded a stronger rate of wage inflation than that seen in December. 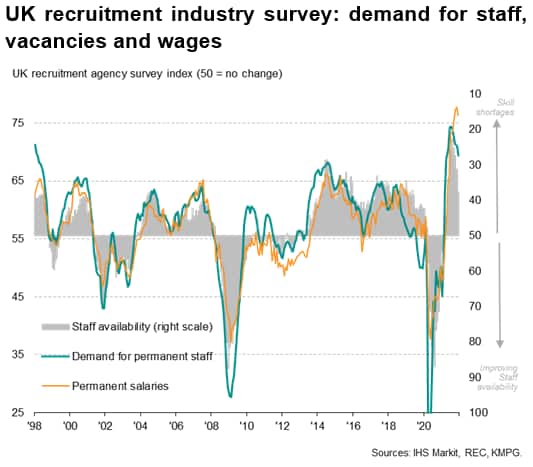 Such a lack of available staff is not surprising. The latest available official data show that the number of unfilled vacancies had risen to 1.2 million in the three months to October, while unemployment was down to 1.4 million; an implied record low ratio of job seekers to vacancies, pointing to a tight labour market which is conducive of course to high wage growth. 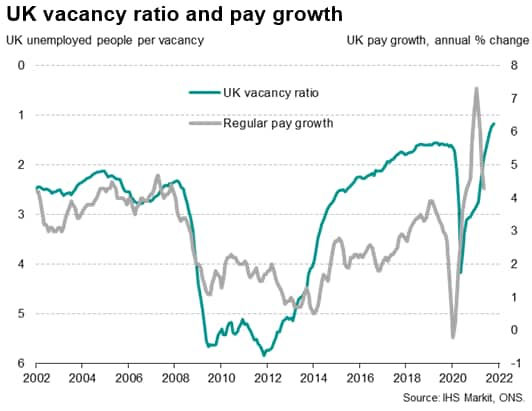 While higher vaccination rates mean the impact of any Omicron wave on the UK economy is likely to prove less severe than prior waves, there remain many unknowns about the severity of the variant, in particular relating to its impact on staff absenteeism due to self-isolating, illness and potential school closures, meaning the existing labour market trends of staff shortages and rising wages could worsen in coming weeks. Risks are therefore skewed towards stickier inflation and slower growth.

The impact of staff wages on prices is already clearly evident in the PMI survey responses. Record numbers of companies cited higher staff costs as a contributor to higher prices throughout the fourth quarter of 2021. 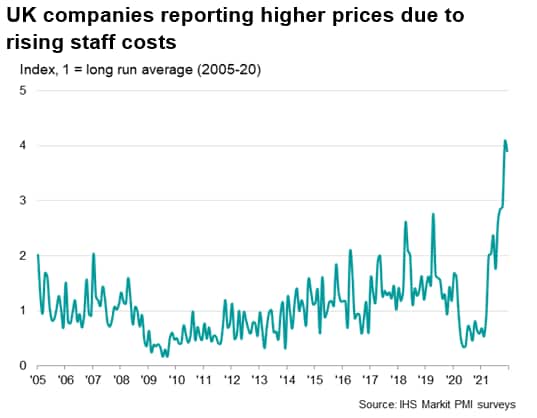 Similarly, the PMI surveys showed a further near-record number of UK companies blaming rising backlogs of uncompleted orders on staff shortages in December. Though this has likewise eased from an all-time high earlier in the year, it should be remembered that the full impact of Omicron on labour supply has yet to be reflected in these numbers. 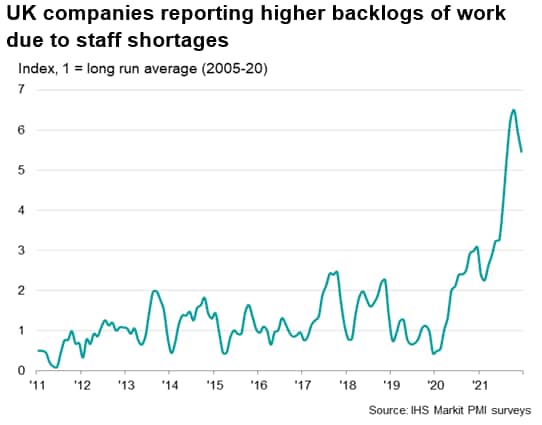 🇺🇸U.S. private sector output growth slowed to an 18-month low in January, according to the latest flash #PMI data,… https://t.co/qPOIDMxbOu

🇬🇧 January flash data for the UK pointed to a slower expansion with the #PMI at 53.4 (Dec: 53.6). Greater material… https://t.co/tkzVrw7yCI