The latest official data signalled a deteriorating labour market up to July, with redundancies rising at the sharpest rate since 2009 as job losses linked to the COVID-19 pandemic mounted. Unemployment rose and workforce jobs fell sharply. However, more timely survey data suggest that even these downbeat official data capture only part of the labour market deterioration that has taken place so far.

Data from the Office for National Statistics' Labour Force Survey showed the number of workforce employee jobs fell by 227,000 over the three months to June, the highest since the 233,000 decline registered at the height of the global financial crisis in late-2008.

While in itself a worrying statistic, the near quarter of a million drop in workforce jobs is likely to be overshadowed by what's to come. Timelier IHS Markit/CIPS PMI survey data are particularly useful as an advance guide to the official statistics. The all sector PMI employment index, covering manufacturing, services and construction, fell to an all-time low of 26.3 at the height of the COVID-19 lockdown in April, indicating a rate of job losses greatly exceeding that seen at the height of the global financial crisis, when the same index merely fell to 37.3.

Historical comparisons indicate that the April low of the PMI was commensurate with jobs being lost at a quarterly rate of over 400,000. While the PMI index had since risen between May and July, it remained firmly in territory indicative of steep job losses, with the rate of decline even accelerating again in August.

Experimental data based on tax records meanwhile show that the number of employees on firms' payrolls was almost 700,000 lower in August than before the lockdown in March, which tallies much more closely with the PMI signal than the Labour Force Survey data, and therefore suggests the latter may worsen in coming months as the official employment data catch up with the gloomier signals from the PMI and tax records. 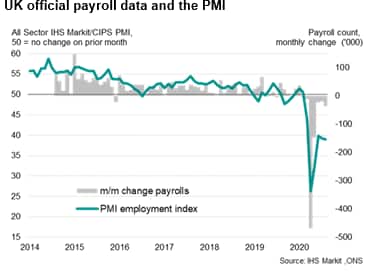 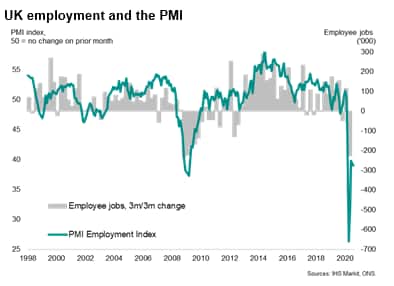 The official unemployment data also look set to deteriorate markedly in coming months, with the latest numbers having failed to reflect the severe weakness evident in other non-official labour market indicators.

While an estimated 1.4 million people were unemployed in the three months to July, up 104,000 on a year ago and 62,000 higher than the prior three months, recent PMI and recruitment industry survey data point to much sharper increases in unemployment.

The steep drop in employment signalled by the PMI during the recent months of the pandemic has been accompanied by REC/KPMG survey data (also compiled by IHS Markit) indicating an increase in the availability of staff to fill vacant positions that has far exceeded that seen during the global financial crisis. Staff availability in fact continued to increase at an accelerating rate into August. This indicator turned higher (indicating rising unemployment) before the official data during the last recession, and the worryingly steep decline in demand for staff this year adds further evidence to suggest that the official unemployment numbers have so far understated the true weakening of the job market. 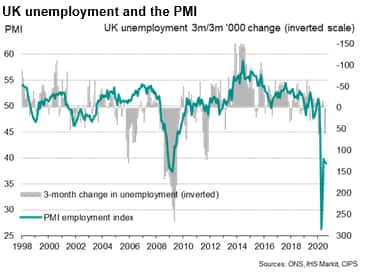 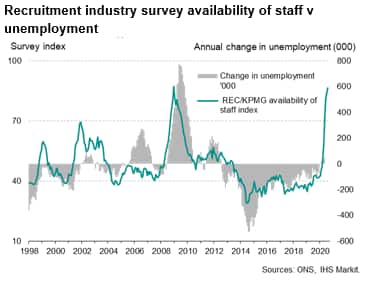 Again, experimental statistics add weight to the darker picture presented by the non-official survey data: according to the ONS, over five million people were temporarily away from paid work in July 2020, with approximately half of these being away for three months or more. The claimant count measure of joblessness has also risen sharply in recent months, up to 2.74 million from 1.24 million in March - a rise of 1.5 million. Both gauges flash warning lights that the unemployment rate will spike higher in coming months. 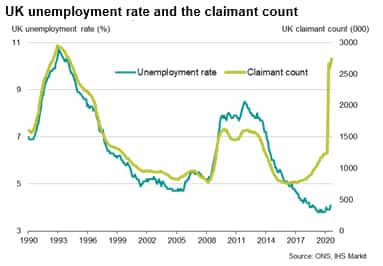 The anticipated forthcoming rise in unemployment also suggests that the unemployment rate will naturally also lift higher. The jobless rate merely rose from 3.9% to 4.1% in the three months to July, remaining surprisingly subdued compared to the record collapse in economic output (as measured by GDP) in the second quarter and relative to the increased claimant count measure of joblessness. However, the unemployment rate for July alone rose to 4.4%, its highest since March 2018, hinting at the start of a worsening trend. 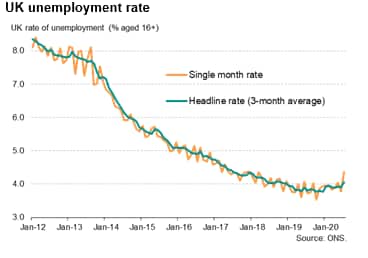 Vacancies have nearly halved since January

Furthermore, an accelerating slump in demand for staff was recorded by the KPMG/REC recruitment survey in August, which measures demand for both permanent and temporary staff via recruitment and employment agencies. This index raises concerns that - while the rate of decline of job vacancies may have peaked back in April - there is no surge in new hiring. 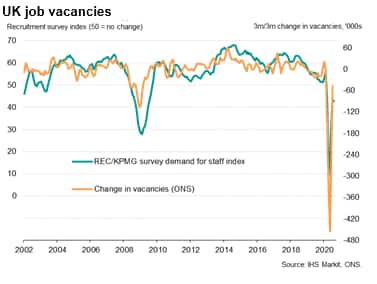 Redundancies rising at fastest rate since 2009

Further bad news came from the number of redundancies rising by just over 58,000 on a year ago in the three months to July as firms pared back operating capacity, the highest annual increase since 2009. 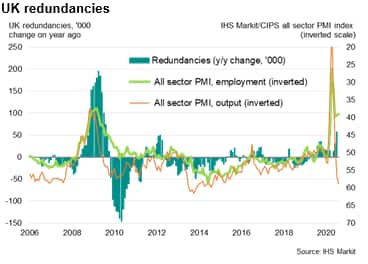 A rise in the PMI's output index to a six-year high in August suggests that firms may start rebuilding capacity, but as yet the survey's employment gauge has failed to pick up commensurately, suggesting employers remain cautious with respect to hiring.

The official job market data therefore look set to worsen before they get better, and any improvement will depend not just on economic growth and the spread of COVID-19, but also government support initiatives. The furlough scheme is set to end on 31st October. The next update on economic growth and hiring will be meanwhile published via the flash PMI surveys on 23rd September, which will give a fresh insight into the likely path of the official data.