Crude Oil Trade: Korean imports to feel the impact of the coronavirus

The market starts observing the first oil cargoes originally for China getting diverted to South Korea or SE Asia, while storage facilities in Shandong are filling up quickly. The coronavirus's effect starts becoming clear, with China's energy demand falling sharply.

The world's leading crude oil importer has been negotiating several oil cargoes, with ETA over the coming weeks, primarily late March and April. Many of these could end in other Asian importers. The country's imports have been quickly affected, with volumes discharged last week not surpassing 5 million b/d. The activity normally stands above 8 million b/d. Chinese refineries have cut output by more than 1.5 million b/d. Meanwhile, crude stocks have been piling up. The one VLCC after the other won't be able to discharge more than 2 million barrels of crude each at China's biggest crude import terminal of Qingdao.

Cargoes will be diverted to South Korea and destinations across SE Asia. Traders have been focusing on alternative options to divert cargoes scheduled to arrive in March, which could provide some time for China's demand to recover.

If a tanker reaches destination but can't be unloaded, charterers pay demurrage, which could push the total costs of transport to much higher levels. These fees currently stand above USD 100,000 per day for cargo arriving in late February/ early March, further motivating shippers to transfer crude to older tankers costing. This could be a rather good solution, since currently, fixed freight rates stand much lower than a month ago, with an average VLCC earning less than USD 20,000 per day.

South Korea, as the nearest option for storage, is expected to play a rather important role over the coming weeks, with some oil traders already looking to secure new crude oil storage leases in the country. We have already seen tankers loaded in Brazil and initially heading to China having been diverted elsewhere.

Meanwhile, these market conditions could affect South Korean imports as well. The country seems to have further increased its exposure to US crude oil trade flows, with January volumes up more than 50% year-on-year, as data by IHS Markit Commodities at Sea suggest. However, based on February's activity so far, the year-on-year growth for this month will only be marginal, currently close to 4% since a year ago. The country seems to have access to many more cargoes which would originally be imported by China. This could affect the US market share in South Korean imports over the coming months, with flows from the US expected to return to previous levels once China starts importing as normal. 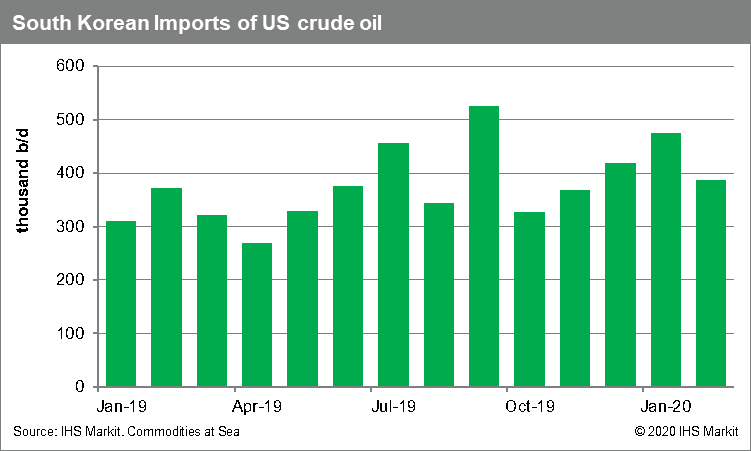 Crude oil flows from Saudi Arabia to South Korea could be strengthened sharply this month, as data by IHS Markit Commodities at Sea suggest based on activity so far in February. 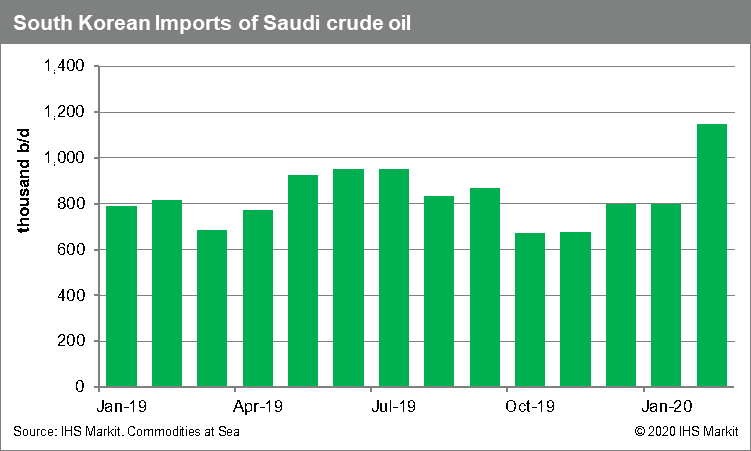 Total volumes moving to South Korea from Saudi Arabia should be also supported by oil traders' decision to rent storage in the Far Eastern country after the coronavirus hit Chinese demand. Some of the world's top trading houses now rent millions of barrels of crude storage in South Korea to hold excess oil supplies. Firms such as Trafigura, Glencore and Mercuria and Total added storage tanks with a capacity of close to 15 million barrels under their control from South Korea's state oil firm Korea National Oil Corp.

Contracts recently signed by these traders will last for three or six months, which could provide enough time for China to recover from the virus outbreak. With the sentiment in the market improving since end of last week, some of these traders also target to bet on a buying spike once the virus is contained.

However, the impact of the coronavirus won't be only positive for South Korea, as the country's oil product exports will be hit sharply this year. China's slowdown will affect demand for oil products, with South Korea expected to suffer a second consecutive year of decline in oil product exports in 2020. This will be primarily driven by a slowdown in sales of gasoline, jet fuel and diesel fuel as China's industrial and transportation operations get affected since the coronavirus outbreak.

The country's exports of clean products to China went down around 7% last year, as the country was getting prepared for IMO 2020. The trend will be supported this year, as the coronavirus outbreak is expected to further slow China's appetite for refined products.