Introduction
Historically, global demand for ethylene has grown at a multiple of world GDP growth. However, the relationship between ethylene demand growth and economic growth is becoming less straightforward. The ethylene demand to GDP elasticity is being diluted by the increasing influence of the technology and services sector on GDP growth and the correspondingly lower impact of manufacturing. Also, there has been a strong push toward sustainability and recycling, so some ethylene demand has been replaced by recycled or natural materials (paper, glass, etc.). This is resulting in lower multiples to GDP growth, especially in developed countries. In 2019, ongoing trade tensions between the United States and China have resulted in an overall slowdown in derivatives demand and a shift in global trade flows. Prices of feedstocks were volatile in 2019 amid sanctions on Iranian crude oil, attacks on Saudi oil production facilities, the upcoming 2020 implementation of a new International Maritime Organization (IMO) fuel regulation, and overall length in global LPG supply, all of which influence price competitiveness and cracker feedslates. The 2019-2024 forecast period projects ethylene demand growth at an average rate of 1.2 times GDP. 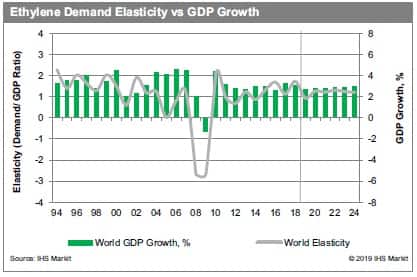 Global capacity addition has been uneven across global regions, influenced by infrastructure and port facilities, feedstock competitiveness, economic growth, and demand. Asia and the Middle East have been leading new ethylene capacity addition in the past decade, and Asia-particularly China-will continue to do so in the next decade. The United States has also invested heavily in new cracker projects in recent years due to an ethane feedstock advantage with approximately 7 million metric tons (mt) of new ethylene production facilities added in 2018-19. Capacity totaling another 3.5 million mt is expected to come onstream in 2020. Looking ahead, global capacity addition is expected to outpace demand in the next few years. Consequently, IHS Markit forecasts operating rates to drop in 2019-22; and recover from 2023 onward. 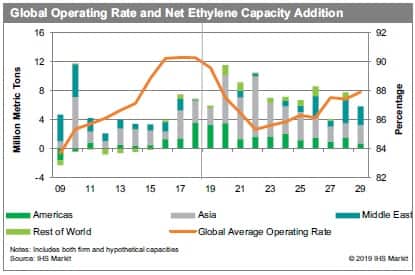 The emergence of lower-cost coal to olefins (CTO) and methanol to olefins (MTO) technologies to produce light olefins starting from around 2010 came at a time when crude oil and naphtha prices were close to peak levels. As a result, in the years that followed, new capacities in China were dominated by CTO and MTO, while interest in traditional steam cracker projects was deferred due to weaker project economics. 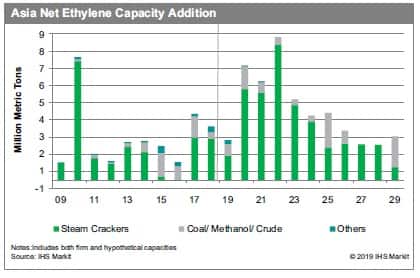 However, the tide is gradually shifting against MTO and CTO technologies due to the current relatively low crude oil and naphtha prices since the collapse at the end of 2014. The industry also recognizes that both CTO and MTO technologies have their own sets of challenges. CTO technologies are coming under increasing scrutiny in China due to environmental reasons while MTO technologies are uncompetitive due to high methanol feedstock costs. As such, some new MTO and CTO projects were either delayed or cancelled in China. Meanwhile, steam cracker projects are regaining prominence due to both environmental and economic advantages. In China and South Korea, most new cracker expansions/investments allow for the use of both naphtha and LPG as feedstocks. In China, there are also several gas crackers in construction and planning phase amid competitive feedstock prices. The economic advantage from cracking LPG compared with naphtha is expected to last for the next few years as IHS Markit forecasts that the length in the global LPG market will continue in next few years whereas naphtha and gas oil supply is anticipated to tighten due to implementation of the new IMO regulation. It is crucial for Asian crackers to remain cost competitive, especially with capacity growth outpacing demand, increased exports of competitive ethylene and derivatives from integrated complexes in the United States, and a slowdown in the global economy expected in the next few years.

Trade
International trade of ethylene monomer will remain quite limited overall compared with its derivatives owing to high freight costs associated with transporting refrigerated liquids. However, this is still necessary to maintain outlets for ethylene in regions that have imbalances in production and consumption of ethylene, and crackers operating at high rates due to high margins. In 2019, spot cargoes from various origins-including the Middle East, Europe, and Southeast Asia-have been shipped to Northeast Asia due to tight supply in the region and workable pricing. Furthermore, sluggish sales of key downstream polyethylene (PE) have resulted in several integrated Asian producers offering spot ethylene monomer to maintain high cracker operating rates. However, most of the ethylene traded across international borders remains in the form of derivative chemicals, including PE, ethylene glycol, styrene, and vinyls (EDC) due to much lower transportation costs. IHS Markit tracks the "net equivalent" trade volume globally, which is the total amount of ethylene contained in the derivative trade. Shipped as liquids or bulk solids, these ethylene derivatives are far less expensive to transport than ethylene monomer. 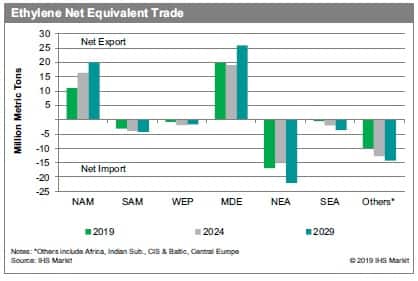 Despite slower economic growth and aggressive investments in new ethylene/derivative capacities, China will continue to dominate ethylene derivative imports. Ethylene equivalent exports from the Middle East have increased rapidly as new capacities allow Middle Eastern producers to increase PE and ethylene glycol exports to Asia, mainly targeting China, although shipments are also going to other regions. Exports of ethylene derivatives from the United States to global markets are expected to increase over the forecast period as new steam cracker and derivative capacities are brought online in the next few years, taking advantage of the low-cost ethane feed available. Meanwhile, exports of ethylene derivatives from other parts of Asia (Southeast Asia, Japan, and South Korea) will be impacted as these regional exporters become less competitive compared with producers in other regions with feedstock cost advantages.

Strategic Issues
There are other key strategic issues that, in the opinion of IHS Markit, will have a significant impact on global ethylene markets over the next 10 years. These are discussed widely and in greater depth in the 2020 World Analysis- Ethylene.

2020 World Analysis - Ethylene
IHS Markit is pleased to present the 2020 World Analysis- Ethylene. This annual service provides our clients with comprehensive analysis of and insight into the global markets for ethylene. In addition to the electronic versions of the study (Tableau, PDF files, and searchable HTML files on IHS Markit Connect), clients can access the online capacity database, which is updated daily, and the online supply and demand database, which is updated once during the 12-month service period. Access to IHS Markit consultants worldwide is also included in the 12-month service period.